Turkey ramps up diplomatic efforts to assure peace for Idlib, while Russia insists on backing regime 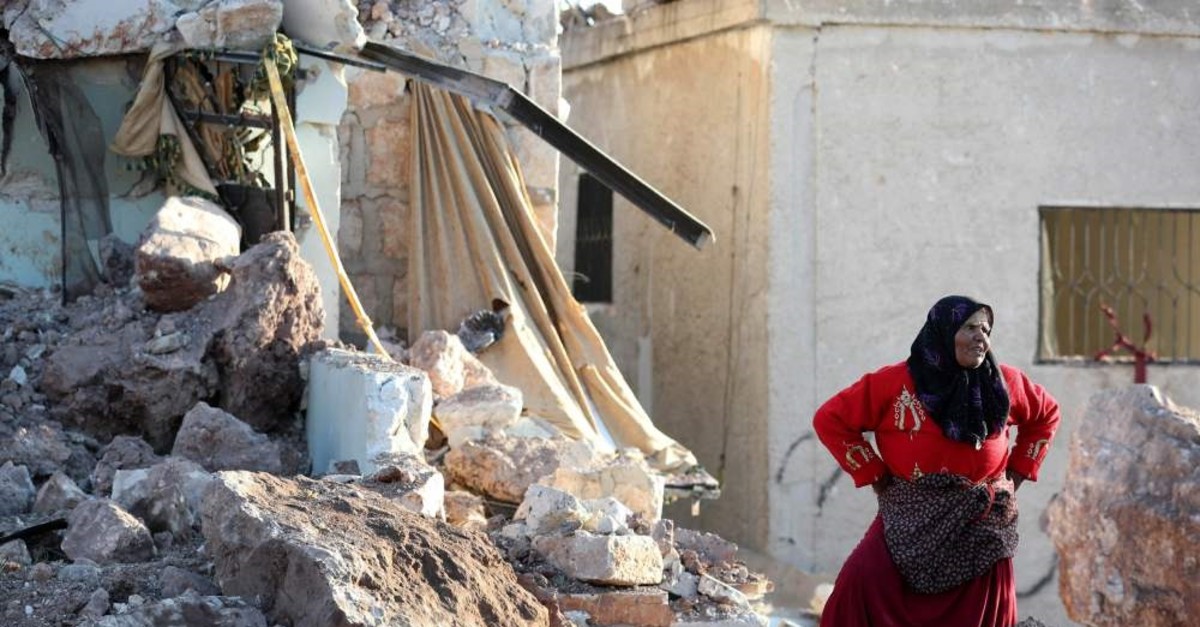 A woman stands amid the rubble of a building that was reportedly destroyed during airstrikes by the Syrian regime's ally Russia, Idlib, May 20, 2019.
by Daily Sabah May 21, 2019 12:04 am

As a response to the escalating violence in the region, Turkey has put itself in the forefront to prevent the currently culminating humanitarian disaster through diplomatic channels. Yet, Russia still seems to be insisting on its support for the regime, fueling the tension instead of easing it

The recent escalation of violence in northwestern Idlib province, caused by the Syrian regime's attacks, destroyed not only the city itself but also the lives of thousands of residents. Amid this growing humanitarian crisis, Turkey has rolled up its sleeves to prevent the violence from going any further and is engaging in multiple diplomatic missions. The latest such talks occurred yesterday as Turkish and Russian defense ministers discussed the case. Still, despite all of these efforts, Russia seems to be determined to insist on backing the Bashar Assad regime forces, causing civilian casualties. Defense Minister Hulusi Akar and his Russian counterpart Sergei Shoigu discussed the latest developments in Idlib, as well as the measures to reduce tension in the region over the phone. The talk was the second one in a week between the two ministers over the issue as the two had phone conservations last Tuesday as well.

However, diplomatic talks are not only continuing at the ministry level but also at the presidential level as well. President Recep Tayyip Erdoğan discussed Idlib and bilateral relations with Russian counterpart Vladimir Putin, the Turkish Presidency's Communications Director Fahrettin Altun said in a tweet last week. According to Altun, Erdoğan told his Russian counterpart in a phone call late Monday that tensions in the war-ravaged city were aimed at disrupting the Turkish-Russian partnership, and both of the leaders affirmed their commitment to the Sochi deal. "The president also added that the cease-fire violations in the Idlib de-escalation zone are worrying, and the fact that schools, hospitals and civilians are targeted has no place in a proper fight against terror," Altun added.

"The president also added that the cease-fire violations in the Idlib de-escalation zone are worrying, and the fact that schools, hospitals and civilians are targeted has no place in a proper fight against terror," Altun added.

As a guarantor of the Syrian regime, Russia is responsible for preventing attacks by regime forces and Iranian-backed militias, who repeatedly violated last year's Sochi agreement that aimed to establish a demilitarized zone in Idlib, which is why Turkey insists on its diplomatic efforts with the country.

The Sochi agreement was reached on Sept. 17, 2018 by President Erdoğan and Putin. According to the agreement the cease-fire in the Idlib region will be preserved, with the withdrawal of heavy arms and radicals from the region. Following eight months of calm provided by the Sochi deal, the regime has intensified their attacks since April 26 under the pretext of fighting the Hayat Tahrir al-Sham (HTS) militants holed up inside Idlib. The intermittent attacks and bombardment have killed, wounded and displaced thousands of people. Residential areas have been destroyed by indiscriminate attacks while numerous educational facilities, health facilities and residential areas collapsed or have become unusable after being targeted by bombs.

Idlib is the opposition's last enclave. Its pre-war population of 1.5 million has swelled to around 3 million with new refugee waves after it was designated a "de-escalation zone" under the Astana agreement between Turkey, Russia and Iran in May 2017 to pave the way for a permanent political solution in Syria. Tens of thousands of Syrians trapped in other parts of the country were evacuated there under various cease-fire agreements.

However, after the regime attacks escalated, the inhabitants of the city began to flock to territories liberated by Turkey through operations Olive Branch and Euphrates Shield.

Despite Turkey's efforts and ongoing diplomatic talks, Russia has continued to back forces loyal to the Syrian regime and launch airstrikes. At least 10 civilians, including five children, were killed in the recent airstrikes in Idlib, a monitor said yesterday.

The Russian military said the overnight air raids on the town of Kafranbel happened following it pinpointed the area as the launch pad for rocket fire on its key Syria airbase of Hmeimim.

The Russian airstrikes came after Moscow on Sunday said Syrian armed forces had "unilaterally ceased fire in the Idlib de-escalation zone" from May 18 at midnight; but that fire had in fact continued. Russia's Ministry of Defense said yesterday that it had repelled a drone and missile attack on its main air base in Syria over the weekend and accused the HTS of being behind the assault, the RIA news agency reported.

RIA quoted the ministry as saying that six missiles fired at the Hmeymim air base in Syria's Latakia Province have been shot down.

The HTS is the most powerful terrorist alliance in Idlib. After the fall of Aleppo in November 2016, dozens of opposition groups, including Ahrar al-Sham and the HTS, squeezed into Idlib.

The raids hit near a hospital in the town, knocking it out of service, the Britain-based monitor said.

An Agence France-Presse (AFP) correspondent saw five homes on the edges of the town that were destroyed or damaged after the strikes. Survivors picked through the debris to save the belongings they could, the reporter said, while a young man covered in dust from head to toe leaned against a wall, shell-shocked after his father was killed.

Umm Wasel narrowly missed the airstrike on her home after relatives invited her over to break her daily fast during the Islamic month of Ramadan with them.

"I came back at night to find my home devastated," said the 72-year-old, dressed in a long red robe and a black scarf covering her hair. "People had thought I was under the rubble," she said.

The Syrian Observatory said six other civilians also died in bombardment by regime forces in other parts of the Idlib region on Sunday. Since April, 38 children have been killed. The Save the Children charity organization said 38 children have been killed in shelling in northwest Syria since April 1, including nine at school, seven at the market and one in the hospital.

"Schools, hospitals and other vital civilian infrastructure must be protected from attacks," the charity's Syria director Sonia Khush said. "Children are particularly vulnerable to the impac

t of explosive weapons, and warring parties should make a particular effort to protect them."

The Syrian opposition called on regime forces to stop attacks in the northwestern province of Idlib, saying that as long as the attacks continue, it is not possible to reach a political solution.

Naser al-Hariri, the head of the Negotiation High Committee formed by opposition figures said yesterday that if Idlib falls, the political solution will be finished without even starting.

Speaking to Anadolu Agency (AA) on the issue, al-Hariri expressed that although forming a constitutional committee is not enough to find a political solution by itself, it is a good start. "We have almost reached an agreement on the committee's modalities. We have mostly agreed on the names of who will attend the meetings on the new constitution," al-Hariri said, adding that although there is no certain date as of now on the formation of the committee, he believes that it will happen very soon. A committee to carve out a constitution was decided on at the Syrian national dialogue congress in Sochi on Jan. 30, 2018 and has generated indisputable U.N. support as a means of reaching a political solution to the protracted crisis. It's expected to have 150 members equally representing the Syrian government, the opposition and civil society groups of independents, tribal leaders and women. As of now, a substantial effort to establish the committee has been contributed, in particular by the Astana process guarantor countries, while the ultimate result is still yet to occur.

"If there would be an agreement on names and regulations, than there would not be any obstacle in forming a constitutional committee," he highlighted.

Al-Hariri also underlined that as the political meetings approach, the attacks of the regime have escalated, saying that the Bashar Assad regime prefers to continue the conflict instead of finding a political solution.

He further referred to Turkey's efforts to ease tension in the region, saying that the country does its best while Russia still backs the regime under the pretext of fighting terror threats. "There is an unspeakable catastrophe in Idlib. Thousands of civilians have been displaced for the second time," al-Hariri said.