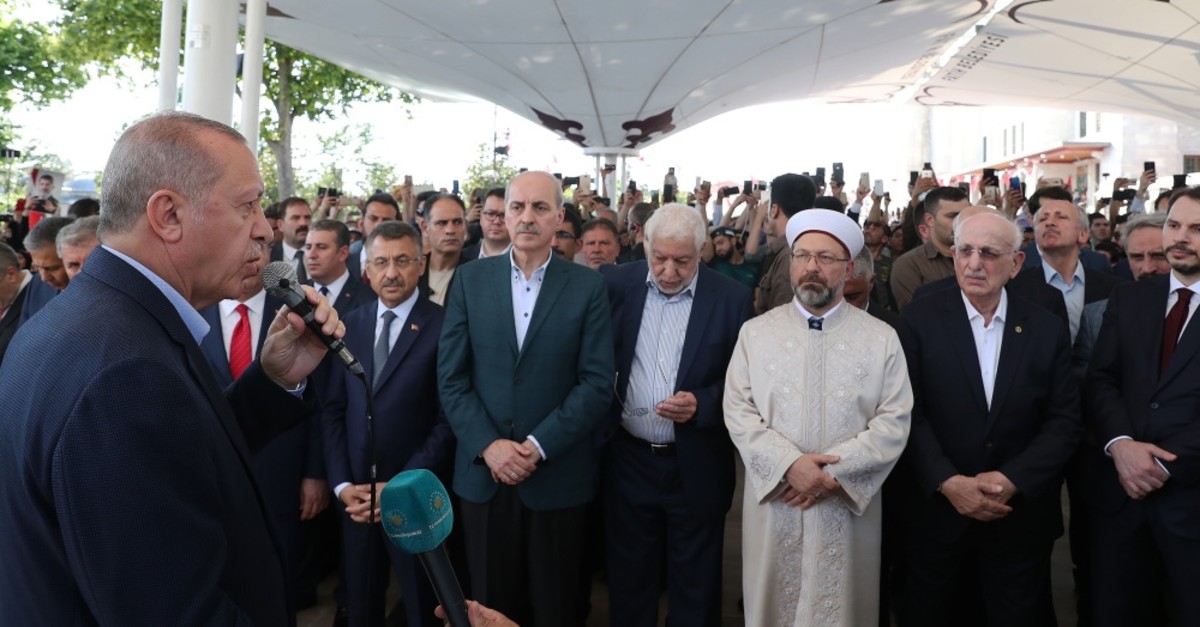 While in court for a hearing on treason charges, Egypt's first democratically elected President Mohammed Morsi was asked to speak. But Morsi collapsed and fell unconscious, dying shortly afterwards on his way to the hospital. His death comes six years after he was overthrown by the military after his one-year rule.

The incident has prompted reactions and messages of condolence all across the globe, with world leaders expressing their shock for his sudden death. Turkey was the first country to react to Morsi's death, with President Recep Tayyip Erdoğan calling him "a martyr who died struggling for his cause" and saying history will never forget the tyrants who caused his martyrdom.

Calling Morsi a "martyr," Erdoğan extended condolences to his family and the Egyptian people.

"Unfortunately, the incident took place in the court room. I first of all I wish God's mercy for our martyred brother Morsi," he said.

"The West has always been silent in the face of these executions by el-Sissi. EU member states forbidding execution unfortunately accepted an invitation by this murderer el-Sissi to attend a meeting in Egypt," he said, criticizing the EU for being "hypocrites" and calling el-Sissi a "tyrant" who took power in a "coup" and has trampled on democracy.

Erdoğan has on many occasions strongly denounced Morsi's ouster and called for the release of Muslim Brotherhood prisoners in Egypt.

Speaking later at an event at the Haliç Congress Center in Istanbul, Recep Tayyip Erdoğan recalled that Morsi had been elected by the Egyptian people and jailed after he was overthrown by "tyrant" Abdel-Fattah el-Sissi, who had been a member of Morsi's cabinet.

"The late Morsi was tried and sentenced to death by the coup courts and drew his last breath in a courtroom, which is a symbol of the years of long persecution against him and his people," Erdogan said.

"The oppressors may make attempts against the lives of the oppressed and may even lead them to be martyred, but they can never harm the glory of their struggle," he added.

"All Muslims will remember the late Morsi for the honorable struggle he carried out until his last breath," Erdoğan said and added, "For us, Morsi is a martyr for his cause. History will never forget those tyrants who put him in prison, threatened him with death and led to his martyrdom."

In a statement, Turkey's Foreign Ministry also said Morsi will be remembered as "an exceptional person in his country's struggle for democracy."

"The coup took him away from power, but his memory will not be erased from our hearts. The ummah will not forget his firm stance. Rest in peace Morsi," he wrote on Twitter.

"Egypt's first democratically elected President Mohammed Morsi who was overthrown by a bloody coup before the eyes of the whole world died in the courtroom. May he rest in peace," he said.

"Egypt's first elected President Mohammed Morsi, was being tried in courtrooms under the control of the junta after an immoral and unlawful coup. He was martyred in the courtroom," The ruling Justice and Development Party's (AK Party) spokesman Ömer Çelik said, joining other Turkish officials.

Turkey's main opposition leader lashed out at the circumstances surrounding the Morsi's funeral.

"He lost his life in a courtroom. We wish God's mercy on him. We would have wished Mohamed Morsi to be buried with a presidential ceremony," Kemal Kılıçdaroğlu of the Republican People's Party (CHP) said.

"He was buried secretly, in a hurry, in the presence of only his family. I would like to express that I do not find this right in terms of our democracy culture, beliefs and morals," Kılıçdaroğlu added.

Thousands gather in Istanbul to pray for Morsi

Thousands joined in prayer in Istanbul yesterday for Egypt's first democratically elected President Mohammed Morsi, who died in Cairo Monday after collapsing during a court session.

Addressing the crowd in Istanbul after the funeral prayer in absentia for Morsi, President Erdoğan said, "I do not believe that Morsi's death is a natural one. El-Sissi continues his cruelty. Morsi wanted to be buried in his village as he stated in his will, but el-Sissi denied him that. They are even scared of the remains of Egypt's first democratically elected president." Erdoğan also condemned the Western world for remaining silent during the coup that removed Morsi from power and the following six years he spent in prison, during which he was tortured.

In the capital Ankara, hundreds gathered outside the Egyptian Embassy in a demonstration in remembrance of Morsi.

Diyanet announced Monday evening that funeral prayers in absentia would be held Tuesday in mosques across the country to honor Morsi's life and his struggle.