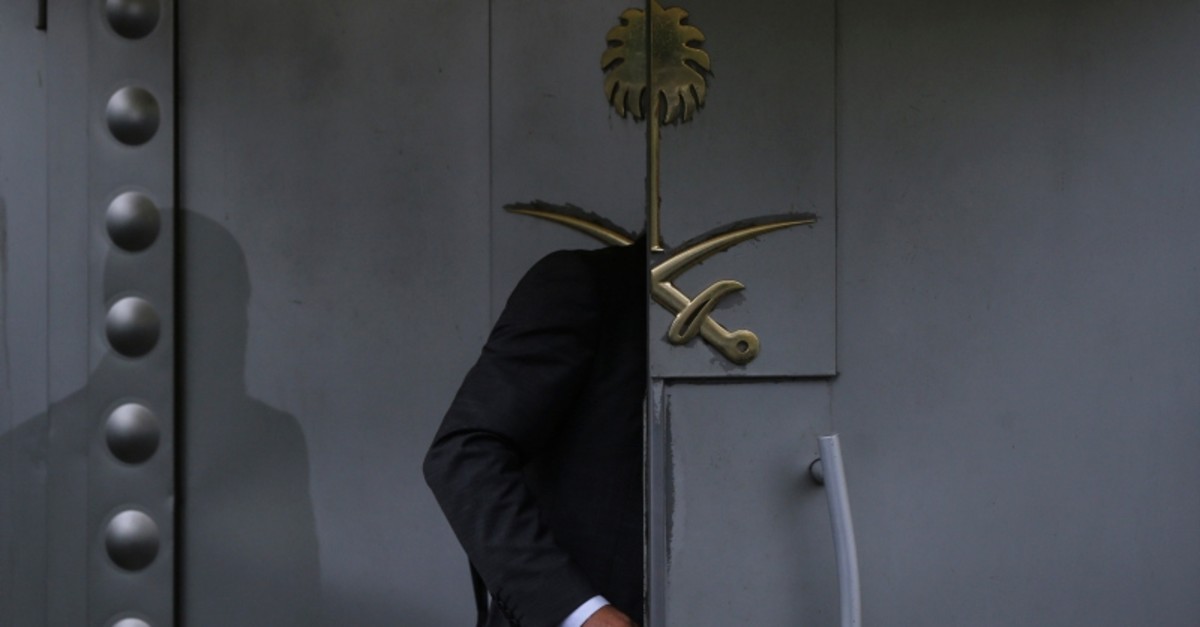 A U.N. report has confirmed that the murder of Saudi journalist Jamal Khashoggi was premeditated, the Foreign Ministry said on Wednesday, urging U.N. member states to implement recommendations on holding all those responsible accountable.

"The report released today by the U.N. Special Rapporteur on extrajudicial, summary or arbitrary executions, Ms. Agnes Callamard, into the killing of journalist Mr. Jamal Khashoggi confirms the findings of the investigation that has been meticulously carried out by our relevant authorities," the ministry said in a statement.

Khashoggi, a critic of the crown prince and a Washington Post columnist, was killed in the consulate on Oct. 2, 2018 by a team of 15, consisting of Saudi officials who arrived in Turkey for his murder and a cover-up team also in charge of dismembering Khashoggi's body.

The U.N. report said there was "no reason why sanctions should not be applied against the crown prince and his personal assets," noting that sanctions regimes have been put in place in the past before guilt was determined.

The Foreign Ministry said that Ankara strongly support Callamard's recommendations "that are aimed at fully elucidating the killing of Mr. Kaşıkçı [Khashoggi] and holding all those responsible accountable."

"We also invite all U.N. Member States and relevant international organizations to insist on implementing these recommendations," the statement added. Speaking to journalists at a media event, President Recep Tayyip Erdoğan said that he hopes that the U.N., "which found Turkey's stance on Jamal Khashoggi's murder right," will also handle the suspicious death of Egypt's first democratically elected President Mohammed Morsi, who died Monday after collapsing during a Cairo court session.

Callamard's 101-page report included the nearly minute-by-minute narrative, which reveals grisly details about the murder. In the recording will it "be possible to put the trunk in a bag?" asked Maher Mutreb, a Saudi intelligence officer who worked for a senior adviser to the crown prince. "No. Too heavy," responded Salah al-Tubaigy, an Interior Ministry forensics doctor who would dismember and dispose of the body, according to the report. He hoped his job would "be easy."

Tubaigy continued: "Joints will be separated. It is not a problem. The body is heavy. First time I cut on the ground. If we take plastic bags and cut it into pieces, it will be finished. We will wrap each of them."

At the end of the exchange with Tubaigy, Mutreb asks if "the sacrificial lamb" has arrived. At no point is Khashoggi's name mentioned, but two minutes later he enters the building.

Before his death, Khashoggi wrote columns in The Washington Post criticizing the crown prince's crackdown on freedom of thought and expression, though he also commended the prince's social reforms. He wrote his columns after leaving Saudi Arabia to avoid being swept up in the crackdown.

Callamard also told Anadolu Agency (AA) that the Khashoggi murder has damaged international relations and that it was an "international crime," calling on the U.N. Human Rights Council (UNHRC) to look at this murder as a "springboard to take very effective measures for the prevention of targeted killings."

"We live in a world where individuals – journalists, human rights defenders and dissidents – are targeted by their governments," she said.

In the U.N. report, Callamard questioned the credibility of the trial and urged its suspension, saying it would be best for the international community to take over the probe and subsequent trial.

Criticizing U.S. inaction against Saudi administration despite concrete evidence, Hatice Cengiz, who was the fiancee of Khashoggi, said that Washington has chosen not to use its strong ties and leverage with Riyadh to get the Saudis to reveal the truth about Khashoggi's murder and to ensure those responsible are held accountable. "My heart was doubly heavy because even after Jamal's murder and the global condemnation it inspired, Saudi Arabia has continued to commit atrocities. It reportedly plans to execute three imprisoned reformist scholars – Salman al-Awda, Awad al-Qarni and Ali al-Omari," she said in an opinion article published on Wednesday in The New York Times.

"We are determined to press for accountability for every person who was responsible," he added.

The Senate, on the other hand, Thursday brought more than a dozen resolutions to vote aimed at blocking the Trump administration's sale of weapons to Saudi Arabia, setting up a new challenge to President Donald Trump's steadfast alliance with the kingdom.

The Trump administration's close ties with the Saudis have frustrated members of Congress for months. Long concerned by high civilian casualties in the Saudi-led war in Yemen, lawmakers were outraged by the killing of Khashoggi by Saudi agents last year.

The move to block the sale was launched earlier this month by Sen. Bob Menendez of New Jersey, the top Democrat on the Senate Foreign Relations Committee. He was joined by several prominent Republicans, creating bipartisan pushback to Trump's foreign policy after the White House used an emergency declaration to approve the arms sale without congressional review.