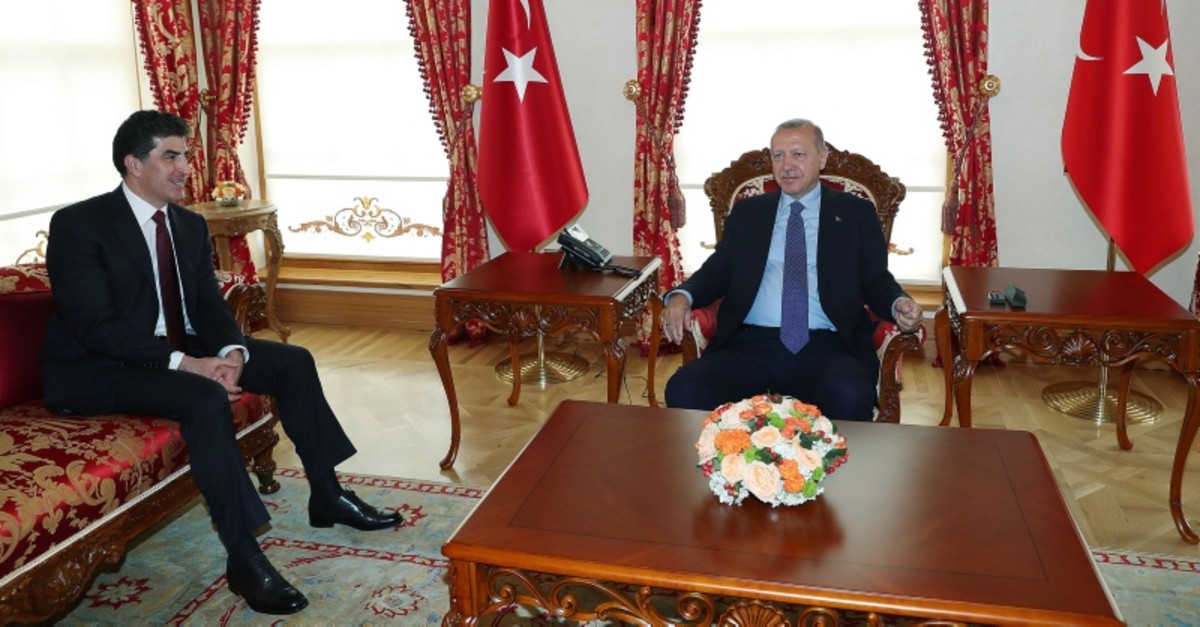 President Erdoğan hosted Barzani in Dolmabahçe Palace on the European shores of the Bosporus in Istanbul. The two discussed a range of issues in a closed-door meeting that lasted 1.5 hours.

On May 28, Barzani was elected as president of Iraq's autonomous Kurdish region, where he had previously served as prime minister for two terms. He is the nephew of the previous and only other holder of the office, Masoud Barzani, who stepped down after 12 years as regional president in November 2017, less than a month after helming a referendum on Kurdish independence that backfired and triggered a crisis for Iraq's Kurds.

He arrived in Istanbul on Friday in his first overseas visit since inauguration on June 10.

"I am convinced that a new phase will start in relations between [Iraq's] Kurdish region, Turkey and Iraq. I hope my visit will contribute to improving relations," Barzani told Anadolu Agency (AA) in an interview following the meeting.

Barzani said that Ankara and Erbil have a historic bond of friendship.

"Turkey has helped our people in all the difficult periods," Barzani said.

Noting that the current trade volume between Turkey and Iraq totals at around $13 billion, Barzani underlined that the two leaders also discussed the expansion of trade volume, as well as the necessary steps to achieve this target.

"We have seen that President [Erdoğan] is very keen on this issue and expects Iraq to make rapid progress in increasing the trade volume," he said, adding that they are ready "if any steps are needed to increase the volume of trade."

Barzani also stressed on the role of KRG in the oil trade between Turkey and Iraq, saying that they are willing to increase the capacity of the existing pipeline in order to export more oil in the future.

Speaking about the PKK terrorist group's presence in Iraq's Sinjar, Makhmur and border areas, Barzani said the KRG is against the usage of its lands to attack neighboring countries, especially Turkey.

He said that the main reason for military operations in the region is the presence of PKK there.

"The fact that the PKK or any other armed organization is causing problems to our neighbors is certainly not acceptable in the Kurdish region. Our policy on this issue has been clear before and will continue to be so."

The PKK caused "big problems" as well as the evacuation of more than 500 villages in the region, Barzani said.

"As a Kurdish region, our policy is to have good relations with our neighbors," he added.

On May 28, Barzani was elected as president of Iraq's autonomous Kurdish region, where he had previously served as prime minister for two terms.