Turkey sends note of protest to UN, Switzerland over deal with PKK-linked YPG 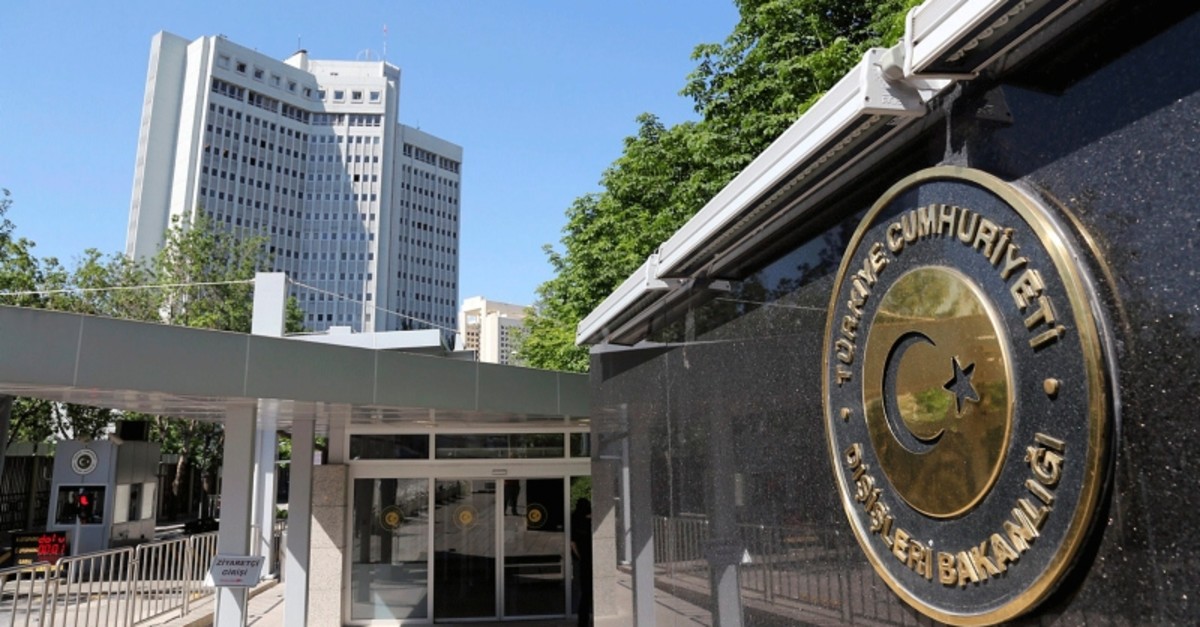 Turkey on Thursday lodged a diplomatic note of protest with the U.N.'s Geneva office for signing a deal with the Syrian Democratic Forces (SDF), which is controlled by the PKK's Syrian wing the People's Protection Units (YPG), and with Switzerland for allowing entry to terrorists sought with notices.

Slamming the move, Turkish officials interpreted the agreement as the U.N. recognizing a terrorist group as a legitimate actor.

The protests comes after Virginia Gamba, the U.N. secretary-general's special representative on children in armed conflicts, met with YPG commander Mazloum Abdi — a senior terrorist known sought by Turkey under the name Ferhat Abdi Şahin or his nickname 'Şahin Cilo' — and signed an agreement over the weekend in Geneva. The so-called "action plan" aims to end the SDF's use and recruitment of individuals under the age of 18. The group has been long known to recruit and use children between the ages of 11 and 18 in its ranks.

In the protest notes, Turkey's permanent mission to the U.N. office at Geneva documented that Şahin was sought by the Interpol with a red notice.

The permanent mission also got in touch with the office of Geir O. Pedersen, the U.N.'s special envoy for Syria, on whether they had knowledge about the "action plan".

The officials working for Pedersen's office told Turkish diplomats that they had no idea about Saturday's signing ceremony of an "action plan."

High-level U.N. officials told Anadolu Agency (AA) that they were not informed about the controversial deal with the terrorist group. Also, the agreement was signed on Saturday with the participation of a few attendants when the U.N.'s Geneva office was on a break over the weekend.

"It is not acceptable for the U.N. to have a meeting with the YPG terrorist organization under the pretext of child soldiers and come up with a deal," President Recep Tayyip Erdoğan said Wednesday.

Criticizing the U.N. for sitting down with a terrorist organization, Erdoğan said Turkey is preparing to warn the "competent" authorities on the issue.

"Regardless of its excuse, for the U.N. to deal with a terrorist organization in such a way, sitting at a table and signing a treaty as if it has a legal status is a scandalous action," he said.

"The U.N. cannot sign up for such a scandal. It just cannot happen," the president said, expressing his disappointment over the incident.

He added that in his opinion, U.N. Secretary-General António Guterres is not a man who is likely to approve such a wrong act.

The Turkish Foreign Ministry also condemned the signing of the controversial agreement Tuesday and said: "There can be no explanation for the U.N., which should be at the forefront in the fight against terrorism, to strike a deal with a terrorist organization. This act also constitutes a clear breach by the U.N. of its own resolutions on terrorism."

The ministry said the nature of the agreement once again attests to the severe violations of human rights and international law committed by the SDF.

"However, it is absolutely unacceptable for the U.N. to negotiate with the bloody terrorist organization to solve this problem," the ministry underscored.

The YPG, which works under the label of the SDF, is the Syrian branch of the PKK that is a designated terrorist organization in Turkey, the EU and the U.S.

In its more than 30-year terror campaign against Turkey, the PKK has been responsible for the deaths of some 40,000 people, including women and children. The YPG is its Syrian branch.

The activities of the YPG terrorist group have been a major security concern for Ankara, while the U.S. viewed the group as a "reliable partner" in the fight against Daesh.

Şahin, a PKK terrorist on Turkey's most wanted list, has been an integral part of this partnership, leading initial negotiations with the U.S. beginning in August 2014.

The YPG's use of child soldiers in its ranks has repeatedly been documented and criticized by international human rights organizations, including Amnesty International and Human Rights Watch. The group reportedly tricks families into giving up their children or kidnaps the children, taking them to training camps, where they are denied contact with their families.

According to a report published by Anadolu Agency (AA) in April, to ensure the commitment of the children, the YPG makes children and youngsters addicted to drugs, so they can later be used as suicide bombers and fight on the front lines.

In 2018, a U.N. annual report on children in armed conflict revealed 224 cases of child recruitment by the YPG between January and December in 2017, a fivefold increase compared to previous years.

Human Rights Watch (HRW) also documented that the terrorist organization continues to recruit children despite objections from families and children while preventing families from getting in touch with their children.

The organization documented 59 children soldiers between the ages of 10 and 15, adding that the YPG confirmed integrating children into the organization.

Human rights organizations have also documented the YPG's violations of human rights, including torture and deliberate disruption of education and health services.

The 1949 Geneva Convention on the Protection of Civilian Persons in Time of War prohibits the use of children under age 15 as soldiers.