US rhetoric on S-400 simmered down after Trump remarks, FM Çavuşoğlu says 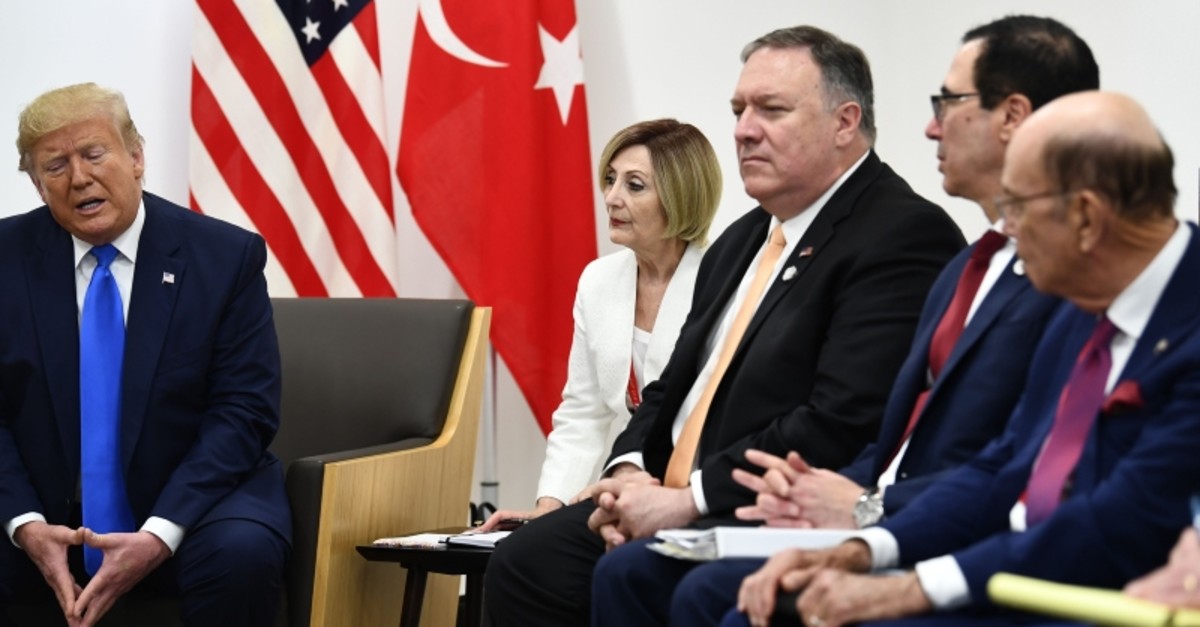 The heightened tensions between Turkey and the U.S. has recently toned down after U.S. President Donald Trump’s remarks at the G20 summit, where he met with President Recep Tayyip Erdoğan and acknowledged the reasons why Turkey opted for buying a Russian-made defense system

Over the last year and up to last week's G20 Osaka summit, tension in Turkish-U.S. relations had increasingly reached a fever pitch due to Turkey refusing to back down from its decision to purchase a Russian-made surface-to-air missile system, and now the situation has softened following U.S. President Donald Trump's remarks at the G20 summit in Osaka, Foreign Minister Mevlüt Çavuşoğlu said Thursday.

Stressing the importance of Trump's remarks in front of the press last week, Çavuşoğlu said that different statements kept coming from a variety of U.S. institutions regarding the S-400 matter, but now "the different voices have begun to diminish."

"Trump's statement seems to have had an impact on Congress as well. We want to solve [the S-400 issue] through diplomatic means. The process [of finding a resolution] now continues in a calmer environment," the minister added.

Washington has threatened to exclude Turkey from the F-35 fighter jet development program if it buys the S-400 systems but during a meeting with President Recep Tayyip Erdoğan in Osaka, Trump seemed to have taken a softer stance.

"During the meeting, Trump himself asked how there could be such a thing. A country, our F-35 partner, has already paid $1.4 billion for its own jets, but it isn't getting them. He said it was unacceptable. However, there is no need to be naive and optimistic in hopes that everything will happen just as Trump says. We are being cautious," Çavuşoğlu said, adding that Trump's words and acknowledgment of the situation was crucial for a healthier delivery process.

In his meeting with Erdoğan on Saturday on the sidelines of the G20 summit, Trump slammed the Obama administration's reluctance to sell Patriot missiles to Turkey in 2013, saying Turkey was not treated fairly as a NATO member.

He said his administration would be looking at different solutions regarding the issues.

The U.S. has also been considering sanctions against Turkey though the Countering America's Adversaries Through Sanctions Act (CAATSA). However, following talks with Trump, Erdoğan said the U.S. president told him that Washington will not impose sanctions.

The foreign minister also highlighted that Turkey had officially appealed to Washington to purchase the U.S.-made Patriot missiles when Trump came to office.

He said the answer just came to Turkey six months ago, two years after appealing.

"We tried to purchase them [Patriot missiles] for 10 years during the [Barack] Obama term. We weren't able to get them, but we didn't receive any response on the Patriots [systems] in the first two years of the Trump administration, either," he added.

He reiterated that the purchase of the Russian S-400 air defense systems was finalized and in the delivery process. He noted that Turkey wanted to purchase S-400 missile systems to satisfy its defensive needs.

During last week's G20 summit in Osaka, Japan, Erdoğan said Trump told him there would be no sanctions against Turkey after it received the S-400 defense systems, which are expected to be delivered later in July.

At the summit, Trump blamed the standoff on then-President Barack Obama's refusal to sell Patriot missiles to Turkey, and said Turkey had not been treated fairly.

When Turkey wanted to buy the Patriot system from the U.S. in 2009 during Obama's term, the U.S. Congress declined the offer for the sale of the Patriot PAC-3 batteries worth $7.8 billion at the time.

Turkey has been at loggerheads with the United States for months over Ankara's planned purchase of the Russian missile defense system. Washington warned Turkey it would be excluded from the F-35 program and could face sanctions unless it scraps the plan to buy the Russian S-400.

Turkey's steps in East Med in compliance with int'l law

All steps taken by Turkey in the Eastern Mediterranean are in compliance with international law, Foreign Minister Çavuşoğlu said, stressing that Turkey notified the U.N. and the EU about its activities in the region.

Referring to statements by Greek Cypriots and threats of so-called arrest warrants for Turkish drilling ship Fatih's crew in a live interview on TRT Haber news channel, Çavuşoğlu said these threats are "meaningless" for Turkey.

He also highlighted that Turkey, as country with a long continental coastline, has legitimate rights and vital interests in the Eastern Mediterranean and that it has been fully exercising its sovereign rights over its continental shelf in accordance with international law.

Ankara has repeatedly voiced that it wants to see energy as an incentive for political resolution on the island and peace in the wider Mediterranean basin rather than a catalyst for further tension. It has consistently contested the Greek Cypriot administration's unilateral drilling in the Eastern Mediterranean, saying Turkish Cypriots also have rights to the resources in the region and that Ankara has the right to conduct hydrocarbon drilling there.

Turkey's first drillship, the Fatih, launched offshore operations on May 3 this year in an area located 75 kilometers off the western coast of Cyprus. The area falls entirely within the Turkish continental shelf, registered with the U.N. in 2004 and under licenses issued by the Turkish and the Turkish Cypriot governments to Turkish Petroleum.

The Fatih is set to be joined by its twin vessel, the Yavuz, which was sent to the Eastern Mediterranean on June 20 to begin drilling in the region soon.

Deputy Premier and Foreign Minister of the Turkish Republic of Northern Cyprus (TRNC) Kudret Özersay on Wednesday said hydrocarbon resources in the Eastern Mediterranean belong to both Turkish Cypriots and Greek Cypriots.

"These resources belong to the two societies. In other words, for the Turkish Cypriot and the Greek Cypriot joint owners of these resources, this important element cannot be ignored," Özersay said at a meeting organized by the Association of Accredited Correspondents at the United Nations (ACANU).

In 1974, following a coup aimed at Cyprus' annexation by Greece, Ankara intervened as a guarantor power. The decades since have seen several attempts to resolve the dispute, all ending in failure. The latest one, held with the participation of the guarantor countries, Turkey, Greece and the U.K., ended in failure in 2017 in Switzerland.