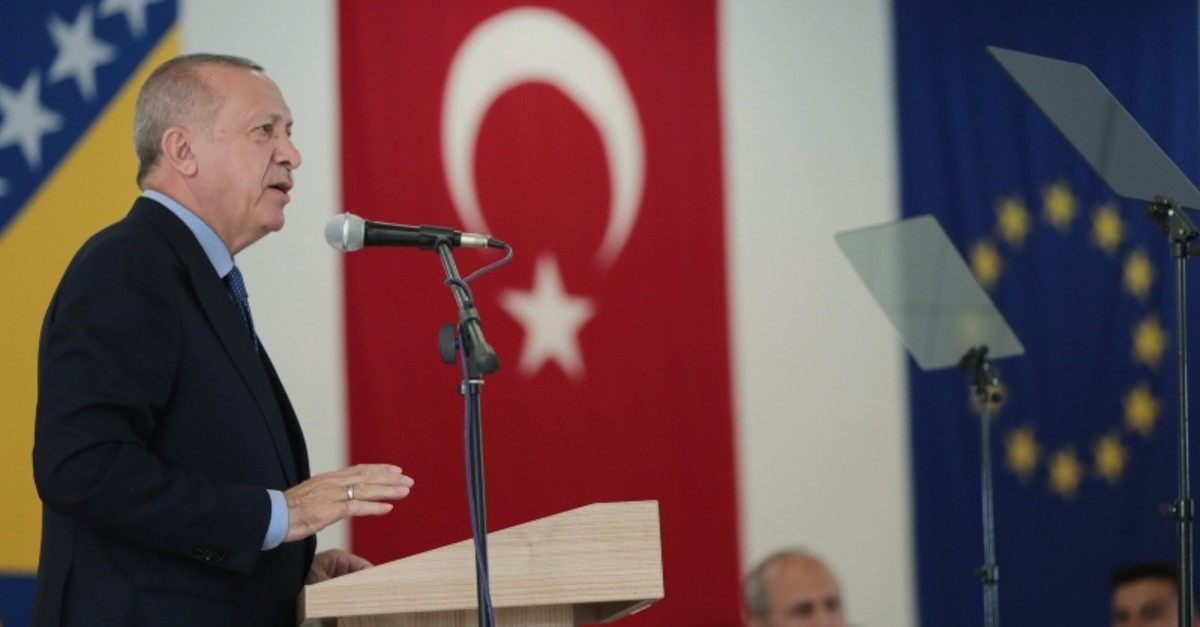 Balkans' peace, stability and welfare are "extremely important" for Turkey, President Recep Tayyip Erdoğan said, ahead of his visit to Bosnia-Herzegovina on Monday. Erdoğan also underlined Turkey's determination for gas exploration efforts in the eastern Mediterranean.

"Balkans' peace, stability, tranquility and welfare are extremely important for us. Our country does have the luxury to monitor developments in this geography," Erdoğan told reporters in a news conference at Istanbul Atatürk Airport.

"Turkey, within the framework of the importance it attaches to the peace, stability and welfare in the Balkans, has effectively contributed to the SEECP, the only regional cooperation platform that encompasses all the countries in the Balkans, since its foundation," a presidential statement said before the visit.

On Monday, he met with Turkish soldiers -- deployed as part of the Turkish Military Representative to the European Union Force in Bosnia-Herzegovina, Operation ALTHEA, in Butmir. The president made an address to the troops and ate lunch with them.

During his visit, Erdoğan will also hold bilateral meetings with members of the Bosnia-Herzegovina Presidential Council and with other participating leaders.

Erdoğan said Turkey contributes to the regional stability not only through bilateral ways but also through diversified cooperation platforms.

"Within the scope of Sarajevo summit, we will hopefully handle cooperation activities in Balkans particularly in the areas of economy, trade, transportation and infrastructure investments," he added.

On Tuesday, Erdoğan will commemorate the 24th anniversary of the Srebrenica genocide.

It is known to be the single worst act of mass killing since the end of the Second World War in 1945.

Regarding the recent developments in Eastern Mediterranean, Erdoğan said oppositions to Turkey's gas exploration efforts will not stop the country.

"Our drilling vessels are currently carrying out exploration works in a coordinated manner within our own roadmap. There may be some opposition in this regard, but none of these objections will hinder our efforts, as we've previously mentioned," Erdoğan said, adding that Turkey and the Turkish Republic of Northern Cyprus (TRNC) are determined to carry out the gas exploration efforts off the island.

Turkish drilling vessel, Fatih, is currently located some 64 kilometers (40 miles) west of Paphos in an area within Turkey's continental shelf which is also claimed by Greek Cyprus within its exclusive economic zone (EEZ). However, it is not among the areas unilaterally licensed by Nicosia for hydrocarbons.