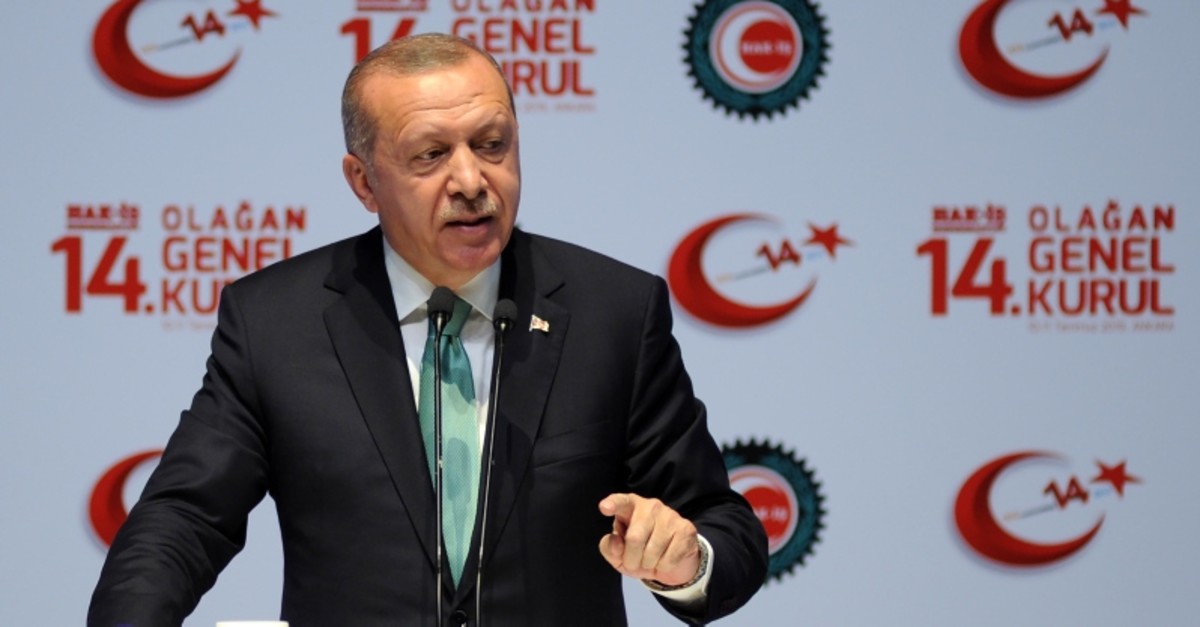 President Recep Tayyip Erdoğan on Sunday criticized a prominent U.S. senator as an "enemy of Turkey" whose actions pose a "thoughtless threat" to Turkish-U.S. relations. Asked about a proposal by Democratic Senator Robert Menendez to lift the arms embargo on the Greek Cypriot administration, Erdoğan​ told reporters he believed U.S. President Donald Trump would "not fall for this scheme."

"A senator's approach at this point should never damage Turkish-U.S. relations," he added.

It has seen an on-and-off peace process in recent years, including the collapse of a 2017 initiative in Switzerland under the auspices of guarantor countries Turkey, Greece and the U.K.

Turning to last week's start of the delivery to Turkey of Russian S-400 missile defense systems, Erdoğan underlined that through buying the systems Turkey is "not preparing for war" but "trying to guarantee its peace and national security."

He added that the missiles' deployment would be completed by April 2020.

U.S. officials have claimed the Russian system would be incompatible with NATO systems and expose U.S. F-35 fighter jets to possible Russian subterfuge.

Turkey is a longstanding partner in the F-35 program.

Turkey stressed the S-400 would not be integrated into NATO systems and would not pose a threat to the alliance.

Erdoğan also said that Turkey is not included in the U.S. Countering America's Adversaries Through Sanctions Act (CAATSA)-the legislation under which sanctions would come-and so sanctions or removing Turkey from the F-35 fighter jet project is "out of the question."

CAATSA was passed in 2017 against Iran, North Korea, and Russia in an attempt to combat those countries' influence across the globe.

Erdoğan said the S-400 deal was "the most important agreement" in Turkey's history, because rather than make Turkey a market for weapons sales, the deal made it a partner in production.

Asked about the U.S. sanctions on Iran, Erdoğan underlined that the region is tired of war and that Turkey disapproves of the sanctions.

He added that the region needs to be able to stand on its own two feet again.

Tensions have been rising between the U.S. and Iran since May 2018, when Washington unilaterally withdrew from the 2015 Iran nuclear deal.

The U.S. has since embarked on a diplomatic and economic campaign to put pressure on Iran to renegotiate the agreement, as well as other Iranian activities Washington considers to be "destabilizing."

As part of its campaign, the U.S. has re-imposed sanctions on exports of Iranian crude oil, which have tanked the Iranian economy.

Tehran has rejected any negotiations with Washington until it lifts sanctions.

Erdoğan also said a two-day technical meeting is planned to begin in Astana on Aug. 1 to discuss the Syrian conflict.

Later that month Ankara will host a trilateral summit with the participation of Russia and Iran, he said, adding that another summit would also later be held in Turkey.

The meetings will mainly be on Idlib and other parts of Syria as well as the general security situation, transition processes, constitutional commission, and resettlement.

Turkey, Russia and Iran are the guarantor countries that brokered a cease-fire in Syria in December 2016, leading to the Astana talks in Kazakhstan's capital Nur-Sultan, which are running parallel to the Geneva peace talks.