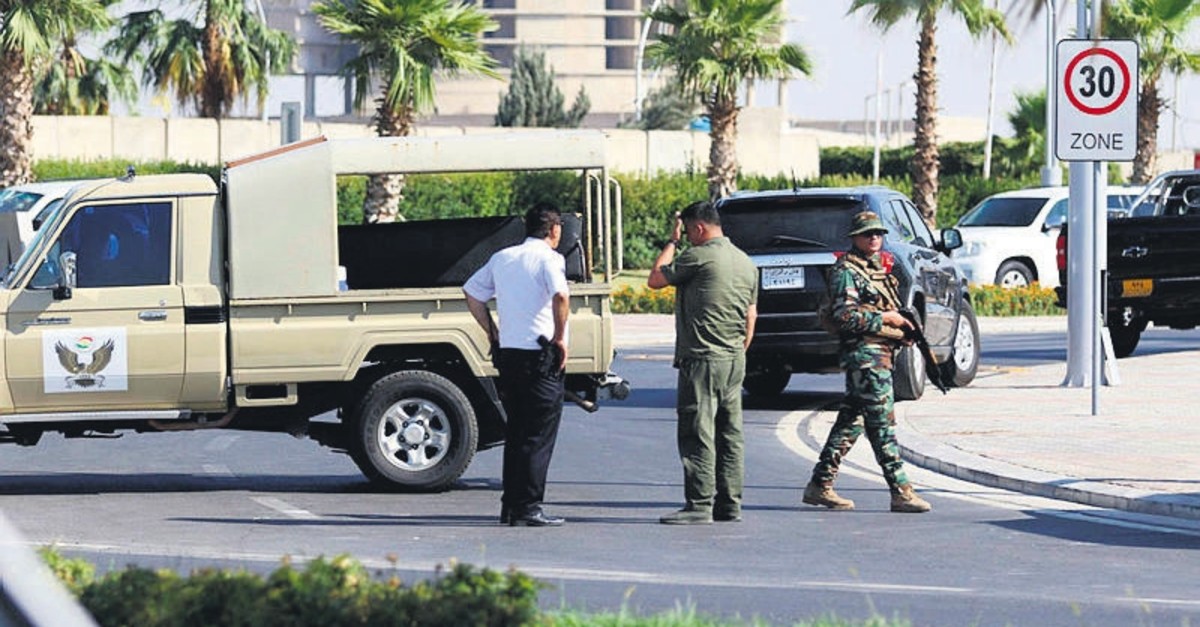 Security forces stand guard outside the restaurant where the Turkish diplomat was shot dead in Irbil, the capital of Kurdistan Regional Government, July 17, 2019.
by Mustafa Kırıkçıoğlu Jul 21, 2019 12:28 am

The murder of a Turkish diplomat on Wednesday in an armed attack on a restaurant in northern Iraq's Irbil was premeditated and aims to undermine Ankara's initiatives in the region, diplomatic sources told Daily Sabah.

"The assassination intended to impede Turkey's diplomatic relations both with the Iraqi central government and the Kurdistan Regional Government [KRG]," the sources said. Ankara and Baghdad have recently been cementing their ties with concrete steps, including high-level visits and agreements.

Both Iraqi President Barham Salih and Prime Minister Adel Abdul-Mahdi visited Ankara earlier this year and had meetings with high-level Turkish officials, including President Recep Tayyip Erdoğan. During the discussions, both sides promised to enhance efforts for cooperation in every field, particularly considering mutual terror threats and regional developments, including possible joint steps against Daesh and the PKK terrorist organizations. Erdoğan also appointed former Forestry and Water Minister Veysel Eroğlu as a special Iraq representative, a move welcomed by the Iraqi side, to better handle problematic issues between the two countries. From the Turkish side, Foreign Minister Mevlüt Çavuşoğlu visited Baghdad and the KRG's capital Irbil to discuss water issues, reconstruction and political ties, announcing that Erdoğan will also visit Iraq to hold the 4th High-Level Strategic Cooperation Council meeting toward the end of this year.

On Wednesday, Osman Köse, a Turkish diplomat, who was serving at Turkey's Consulate in Irbil, was killed in an armed attack at a restaurant, the Turkish Foreign Ministry confirmed in a statement. Çavuşoğlu said three attackers were involved in the incident, while two Iraqis were also attacked. One of the suspects was identified as Mazlum Dağ, who was born in 1992 in the southeastern Turkish province of Diyarbakır. The Irbil police department has asked that anyone with information about the suspect report it to the security forces. The statement said that security forces are still searching for the attackers.

Murat Aslan, a security analyst and academic at Hasan Kalyoncu University, said it is not possible that the assassination was carried out spontaneously, highlighting that the action coincided with expansion of Operation Claw in northern Iraq and the trial day of pro-PKK Peoples' Democratic Party (HDP) leader Selahattin Demirtaş, who was arrested on terrorism charges.

"Also, Barham Salih and Nechirvan Barzani visited Istanbul recently and noted that the PKK has no place on Iraqi soil, the statements forcing the terrorist organization to end its presence in the country," he said.

The Iraqi foreign minister on Wednesday said the "criminal act" that took place in Irbil against a diplomat from Turkey's Consulate will not affect ties between Ankara and Baghdad. Mohammed Ali al-Hakim's remarks came during a phone call with Çavuşoğlu, expressing his condolences "for the attack that claimed the life of the Turkish diplomat in the Irbil Consulate, and his sincere condolences to the family of the deceased," according to a statement tweeted by the Iraqi Foreign Ministry.

PKK maintains its presence in KRG

Similar to enhancing relations with Baghdad, Turkey also opened a new chapter with the KRG with the visit of newly elected President Nechirvan Barzani to Turkey in June following nearly two years of hiatus triggered by the illegal independence referendum by the KRG in northern Iraqi territories in September 2017. Speaking in an interview after his meeting with Erdoğan, Barzani said, "I am convinced that a new phase will start in relations between [Iraq's] Kurdish region, Turkey and Iraq."

More than 3,000 Turkish companies were actively involved in the KRG until the terrorist group Daesh emerged in 2014. These companies have played an important role in the region's development so far. Since the region was cleansed of Daesh, the interest of Turkey and Turkish companies in the region have increased even more as the country has had a role in the development of the region, undertaking important infrastructure projects. Such attacks are rare in Irbil, and Iraq's self-governing KRG region is politically allied with the Turkish government, but the PKK, which has conducted a decades-long terrorist campaign against Ankara, operates in parts of the territory.

Stressing that the murder of the Turkish diplomat aims to deal a blow to Turkey's determination in anti-terrorism efforts in northern Iraq, Aslan said the KRG should take concrete steps for the upcoming period against such threats. "Even though the KRG has been making strong statements, they have not taken concrete action against the PKK so far. It should apply measures in city centers. The killing of consulate workers induced by an intolerant environment is not an acceptable situation for Turkey," Aslan said.