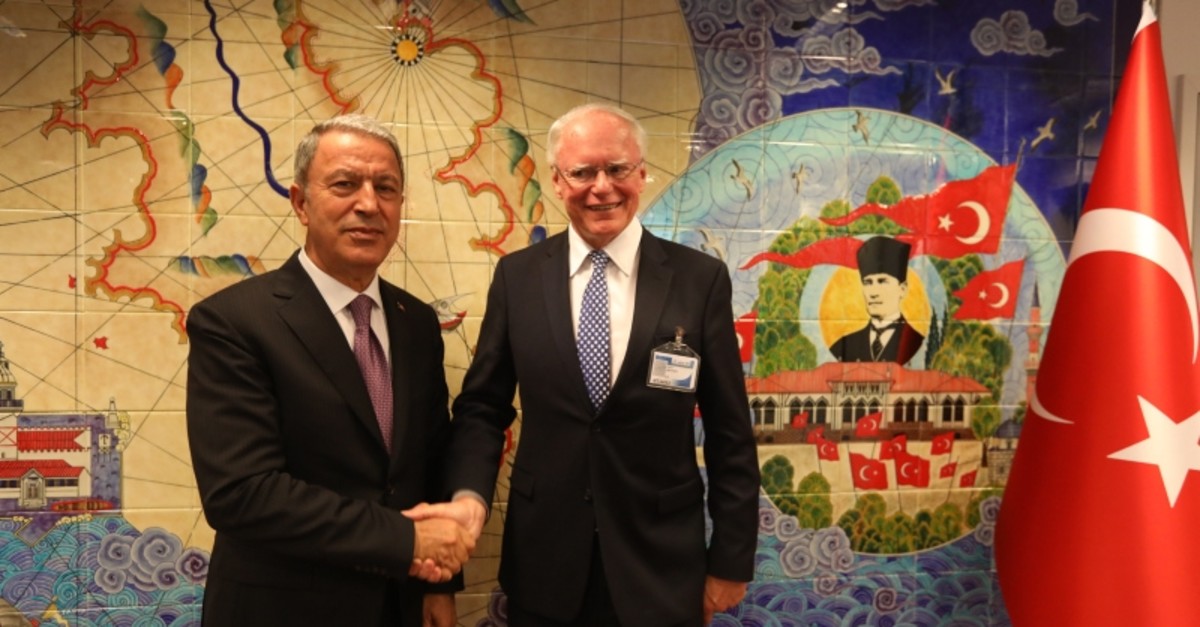 The U.S. special envoy for Syria has completed his first day of talks with Turkish officials on Syria, counterterrorism and security, after arriving in Ankara early Monday.

After talks between U.S. and Turkish delegations at the Ministry of Foreign Affairs, James Jeffrey was received by National Defense Minister Hulusi Akar.

Their meeting was dominated by issues such as the safe zone proposal in Syria to be established along Turkey's border, the U.S.' cooperation with the People's Protection Units (YPG) terrorist and allowing safe return for Syrians.

The groups also exchanged views on the situation east of the Euphrates, the presence of PKK-affiliated YPG in the region and are expected to discuss Turkey's exclusion from the F-35 program over Ankara's Russian S-400 missile defense system acquisition.

Following the 3-hour-long meeting, the National Defense Ministry announced that both sides had agreed to continue talks regarding the safe zone to continue between military delegations, and resume the discussion Tuesday at the ministry.

Akar reiterated that Turkey's fight in the region is not against a specific ethno-religious group like Kurds or Arabs but against terrorists of the PKK/YPG and Daesh, and the conditions for Syrian refugees' return must be created.

The ministry also said that Akar had conveyed Turkey's concerns regarding the meeting between high-ranking U.S. officials and YPG terrorists to Ambassador Jeffrey.

Akar also underscored that the PKK/YPG terrorist organization must withdraw from the safe zone completely, as well as all ensure heavy weapons are removed from the region, while the necessary conditions must be created to ensure the safe return of displaced Syrians.

Jeffrey, who also serves as the U.S. special envoy for the Global Coalition to Defeat Daesh, is now set to have several other meetings Tuesday with senior Turkish officials in the Turkish capital.

Jeffrey's visit came upon an invitation by the Turkish government, according to a written statement by the U.S. State Department.

"Ambassador Jeffrey is leading an interagency delegation to continue discussions with senior Turkish officials to advance issues of mutual interest on Syria to include, addressing Turkey's legitimate security concerns, the implementation of UNSCR 2254 on the resolution of the Syrian conflict, and our continued efforts to ensure an enduring defeat of ISIS," the statement said ahead of Jeffrey's visit, using an alternate acronym for Daesh terror group.

Foreign Minister Mevlüt Çavuşoğlu said Monday that he hopes an agreement can be reached in talks with Jeffrey on a planned safe zone in Syria.

Çavuşoğlu said that if the planned safe zone is not established and threats to Turkey continue, an operation will be launched east of the Euphrates River to oust the YPG from the region.

It is also reported that Jeffrey has requested an appointment to meet with Presidential Spokesperson Ibrahim Kalın. If the schedule can be arranged, Jeffrey is expected to meet with Kalın.