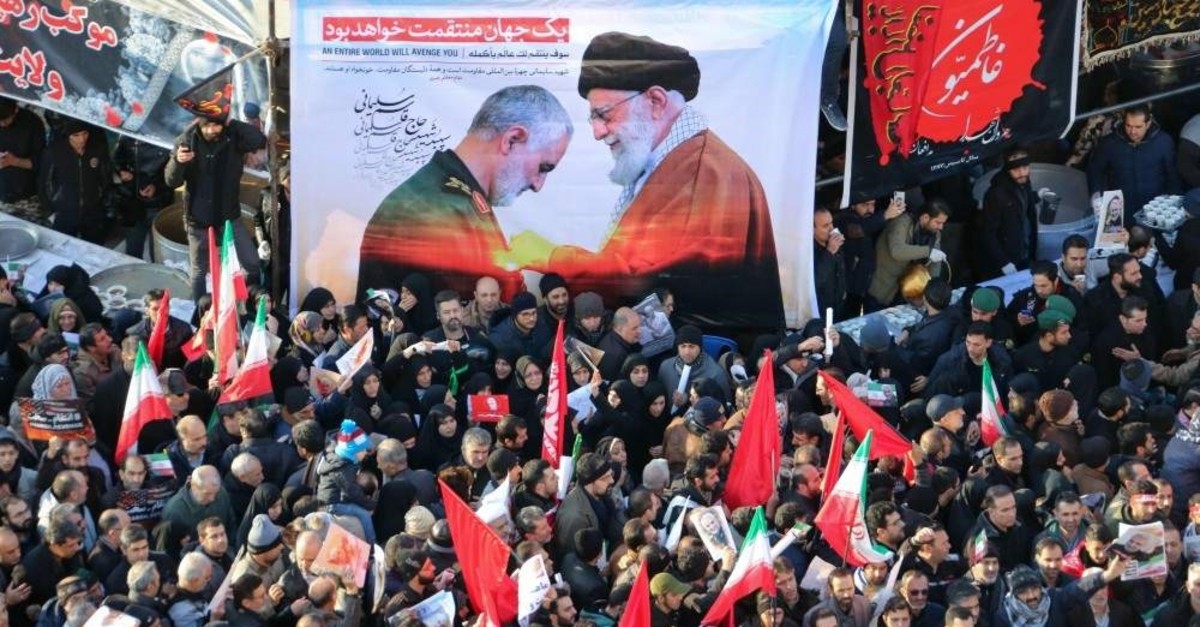 Ankara calls for a reprieve in Middle East after killing of an Iranian commander through a U.S. airstrike, causing the raise of concerns in the international community as the aftermath of the incident is also full of harsh statements rather than calming remarks

As the tension escalates in the region with the latest developments taking place between the U.S. and Iran, Turkey has adopted rhetoric aimed at de-escalation, expressing serious concern about the crisis.

Turkey is following the aftermath of the killing of top Iranian commander Qassem Soleimani in Baghdad with great concern because it seems like this tension will not end here, President Recep Tayyip Erdoğan said late Sunday.

The president highlighted that both the U.S. and Iran need to take steps to reduce tension.

"Killing a high-ranking commander of a country, a state, would not be left unrequited," he said in a broadcast interview with CNN Türk.

He added that making Iraq a conflict zone over U.S.-Iran tensions is damaging the stability of the region.

Iran has vowed harsh retaliation, raising fears of an all-out war. U.S. President Donald Trump says he ordered the strike to prevent a conflict. His administration says Soleimani was plotting a series of attacks that endangered American troops and officials, without providing evidence.

Turkey has been trying to reduce tensions in the region through diplomatic channels, Foreign Minister Mevlüt Çavuşoğlu also said on Monday, as the U.S. and Iran continue to exchange threats to retaliate against one another following the killing of an Iranian commander in Iraq.

Following the killing of Soleimani Friday, the strain between the decades-long foes immediately tightened as harsh statements followed one another from both the U.S. and Iran, as well as other regional countries such as Iraq and Israel.

Iran announced Sunday that it will no longer comply with any commitments under the 2015 nuclear deal signed with several world powers.

"By taking the fifth step in reducing its obligations, Iran is abandoning the last key practical limitation under the Joint Comprehensive Plan of Action, which deals with the number of centrifuges," the government said in a statement.

The government noted, however, that it will continue to work with the International Atomic Energy Agency (IAEA).

It added that if U.S. sanctions are lifted and benefits are provided, Tehran is ready to return to the agreement.

In addition, officials such as Esmail Ghaani, an Iranian general who replaced Soleimani, also vowed in remarks aired Monday to take revenge as Tehran abandoned the remaining limits of its 2015 nuclear deal with world powers in response to the slaying.

Other actors in the region spoke out as well. Hezbollah Secretary-General Hassan Nasrallah announced Sunday that the U.S. Army will pay the price for the killing of Soleimani, the head of Iran's elite Quds Force, who was regarded as the second-most powerful person in the country.

Nasrallah said Trump and his administration will realize that they have lost in the region when the coffins of American soldiers and officers are sent back home.

The fairest measure taken against America would be against the U.S. military presence in the region, including military bases, warships and every U.S. officer and soldier, he said.

Nasrallah underscored, however, that U.S. civilians in the region or elsewhere cannot be harmed, "which would only serve Trump's agenda."

When it comes to Iraq, the country declared that it is in the process of preparing the legal steps for the removal of U.S. troops stationed in the country to fight Daesh, former Prime Minister Adil Abdul-Mahdi said Sunday.

In a statement, the government said Abdul-Mahdi spoke with French Foreign Minister Jean-Yves Le Drian by phone, informing him of the move.

They also discussed the future of relations between Iraq and the international coalition against Daesh and the war on terrorism.

The talks came after Iraq's parliament voted unanimously Sunday to expel all foreign troops from the country.

The U.S., on the other hand, as the perpetrator of the incident, did not hesitate to fuel the tension instead of calming the storm. Trump threatened "major retaliation" Sunday if Iran avenges the killing of the key military commander and warned of massive economic sanctions against U.S. ally Iraq if the country expels U.S. troops based there.

"We think there is a real likelihood Iran will make a mistake and make a decision to go after some of our forces, military forces in Iraq or soldiers in northeast Syria," he told Fox News.

Israel, one of the biggest allies of the U.S. in the region and a decades-long opponent of Iran, has put its embassies and consulates on high alert in the wake of the killing, according to an Israeli daily Monday.

Israel Hayom newspaper said diplomats have been warned to take extra precautionary measures and "watch their every step."

Yet on several occasions, Netanyahu expressed support for Trump's actions, saying Soleimani "was responsible for the deaths of U.S. citizens and many other innocent people."

With all of these statements airing one after another, Turkey, being a major regional actor, conducted intense diplomatic traffic with both parties involved in the incident, as well as with other world leaders.

"I had called on (U.S. President Donald) Trump to exercise restraint toward Iran in a phone call four or five hours before the strike. We were also shocked upon receiving the news," Erdoğan said.

In talks with Iran's Hassan Rouhani and Iraq's Barham Salih, the leaders discussed the latest developments in the region as well as bilateral relations, sources said on the condition of anonymity.

Erdoğan and Saleh emphasized that regional and international cooperation is needed to resolve crises in the region.

Çavuşoğlu, on the other hand, noted that Russian President Vladimir Putin, who will arrive in Turkey Wednesday for the launching ceremony of the TurkStream pipeline project, will also discuss regional developments with Erdoğan.

"We also continue to keep in touch with Iraq and will do our best to reduce the spiral of violence," Çavuşoğlu said.

The foreign minister himself also on Sunday held a phone conversation with his Pakistani counterpart. According to diplomatic sources, Çavuşoğlu and Shah Mahmood Qureshi discussed the killing. He also spoke with UN Secretary-General Antonio Guterres and his Qatari counterpart over the phone, diplomatic sources said late Sunday.

In response to a question about if Turkey would act as a mediator in the U.S.-Iran conflict, Çavuşoğlu said on Monday that Turkey will continue efforts in this regard. He noted that he has spoken with his U.S. counterpart Pompeo and has given suggestions to reduce tensions.

"The U.S. says it does not have any preconditions for dialogue but Iran opposes it under the scope of existing sanctions against it," Çavuşoğlu said, adding that Turkey would contribute to establishing direct contact between the U.S. and Iran as they do not prefer having a mediating actor.

"The president will also continue to contribute in this regard," he added.

EU, NATO on guard over crisis

Turkey, however, is not the only actor that got into a series of diplomatic discussions over this incident as international organizations such as the EU and NATO also announced immediate meetings to deal with the crisis.

NATO state ambassadors met Monday afternoon for an urgent session in Brussels over the killing of the Iranian military commander.

NATO training operations in Iraq have been suspended in the wake of the strike. The transatlantic military alliance's current mission in Iraq began in 2018 with the aim of training Iraqi armed forces to prevent a resurgence of Daesh.

The three leaders spoke of "an urgent need for de-escalation ... The current cycle of violence in Iraq must be stopped." Fighting Daesh "remains a high priority," the European leader's statement added and urged Iraqi authorities to continue providing support to the U.S.-led alliance fighting the militant group.
RELATED TOPICS