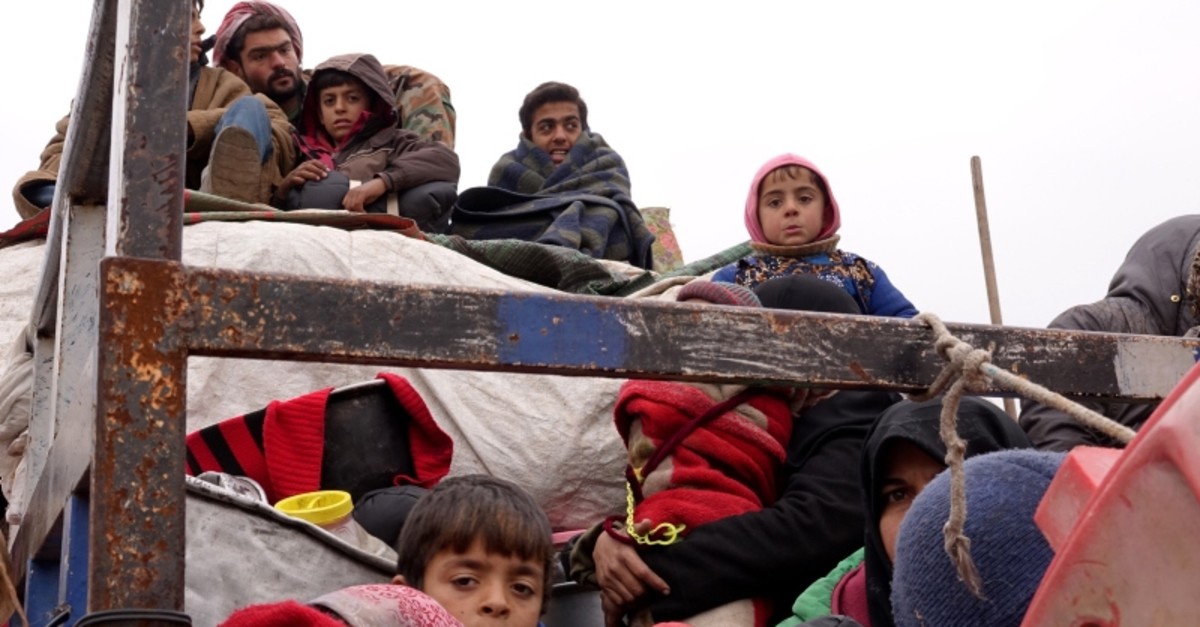 Syria's northwestern Idlib province has seen a surge in violence and attacks on civilians by the Assad regime and its backers despite a cease-fire brokered through the efforts of Turkey and Russia.

"It is time to say stop to the Assad regime's atrocity," President Recep Tayyip Erdoğan said Sunday before leaving Atatürk Airport for Germany to attend the international Berlin conference on peace in Libya.

"The Syrian regime and allies continue their attacks on civilians in Idlib. Migration toward our country has started once again. It is now time to say stop to the brutality of the regime. We will also raise the Idlib issue during our contacts in Berlin," the president said.

On Saturday, the president had underlined that Turkey would remain in Syria and could even move further into the country until calm can be provided for the country's southern border and its "brothers" living there.

Speaking at an inauguration ceremony in Istanbul, Erdoğan said that Turkey now considers the security of its southern border not only in the border provinces of Mardin, Şanlıurfa, Gaziantep, or Hatay but further inland.

"We are determined to use all means of politics, diplomacy and military power in issues concerning Syria, the Mediterranean and Libya," Erdoğan said.

Turkey pushed hard for a cease-fire in Idlib after the region endured months of battering by forces loyal to the Bashar Assad regime and its allies, sending about a million civilian refugees flocking towards the Turkish border. Turkey announced on Jan. 10 that a new cease-fire in Idlib is set to start just after midnight Sunday, Jan. 12.

However, only two days after the announcement, Russian jets struck several opposition-held towns in Idlib for the first time since the cease-fire, witnesses and sources said. They said the towns of Khan al Subl, Maasaran and several others in the southern Idlib province were targeted after a two-day lull in aerial strikes against the last opposition bastion that had been pounded for over a month in a renewed assault.

The conflict in Idlib dates back almost to the beginning of the civil war, as the province slowly turned into a stronghold for the opposition and later, is left as the only opposition stronghold in the whole country. Idlib, which received massive migrant flows through internal displacement and reached a population as large as 4 million, was taken under control by opposition forces in 2015 for the first time and since then, became an instant target for regime attacks.

Around 27,000 civilians have fled their homes over the last three days due to the attacks of the Assad regime and its allies. According to Syria's Response Coordination Group, the displaced civilians are headed to areas near the Turkish border due to the attacks.

Mohammad Hallaj, the director of the group, told Anadolu Agency (AA) that the civilians left their homes in Darat Izzah district and several towns, including Khan Tuman, Khan al-Asal, Kafr Naya, and al-Qasimia due to attacks supported by Russian airstrikes.

"People have started to migrate from western Aleppo toward Afrin and Azaz. In other places, when an animal dies people react, yet people die here," Syria Coordinator of the Humanitarian Relief Foundation (IHH) Zeki Tahiroğlu said Sunday during an aid campaign in Afyonkarahisar province.

He criticized the international community and pointed out that persecution has been going on for nine years in Idlib.

"Neither Russia nor the regime will abide by the agreements," he added.

Russian airstrikes killed five civilians in Idlib, local sources said Saturday. The Syrian Observatory for Human Rights said three children were among those killed after midnight Friday in the village of Bala in Idlib.

Opposition forces answered the attacks of the Assad regime, Iran-backed groups and Russia. Eighty-five militias were eliminated during raids on Idlib's districts while 20 fighters of the Syrian regime were killed and four Russian soldiers died in the last three days. Opposition forces also destroyed a large number of tanks, armored vehicles and rocket batteries.

Syria's war has killed more than 380,000 people and displaced more than half the country's population since starting in 2011 with the brutal repression of anti-government protests.

However, more than 1,300 civilians there have been killed in attacks by the regime and Russian forces since then, as the cease-fire continued to be violated.
RELATED TOPICS