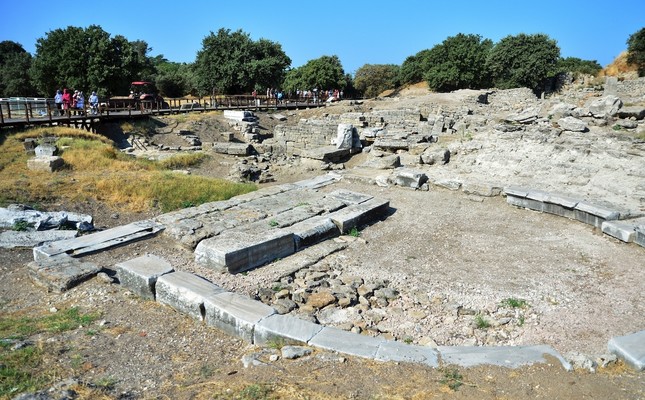 New findings of Troy-0 and Troy-1 periods reveal that the city has a history of 5,500 years.

Excavations at the ancient city of Troy, which is on the UNESCO World Cultural Heritage List, are underway at the oldest settlement of the archaeological site.

The earliest strata of settlement in the ancient city, located in the Tevfikiye village of central Çanakkale province, dates back to the Early Bronze Age from 3000 B.C. to 2500 B.C. It is a reference for other archaeological sites in Europe and the Aegean region with its continuous stratification.

Troy's reputation, which grew worldwide when it was included in UNESCO's World Cultural Heritage List in 1998, reached its highest level with the movie "Troy," which was released in 2004, starring Brad Pitt.

Archaeologists, who are continuing excavations in Troy with the support of the Ministry of Culture and Tourism, have concentrated their work in the oldest known settlement of the ancient city. Speaking to Anadolu Agency (AA), the head of the Excavation Committee of the Ancient City of Troy and a faculty member of the department of archaeology at Çanakkale Onsekiz Mart University, professor Rüstem Aslan said that Troy had a crucial place among the regions inhabited by prehistoric societies called "mound settlements" in Anatolia.

Aslan said that the area in the ancient city where they are still working was first excavated by Heinrich Schliemann in 1872, adding that they launched excavations five years ago after 80 years.

Aslan stated that the main purpose of their concentration in this region was to reach new information about the strata of settlements in Troy, continuing, "We have been working here for five years. For the first time here, we have found very important traces of a previously unknown staircase entrances to the castle belonging to the period we call Troy-1, more importantly, however, we have important traces belonging to the period which was detected by excavation group chairman professor Manfred Osman Korfmann from 1988 to 2005 and defined as Troy-0. We have also found the traces of the architecture of bonding timbers for the first time, as well as pottery and architectural traces of that period. Thus, the settlement history of Troy went back 500-600 years before 3000 B.C."

Emphasizing that Troy is a very difficult place to understand, Aslan stated, "It is a difficult place especially for visitors who come here to understand the ruins. For this reason, the Museum of Troy has a distinctive function. The presentation of the finds through drawings, films and animations has a great function in helping visitors better understanding Troy's ruins." Aslan pointed out that the history of Troy's settlement has become a certainty, adding, "We can clearly say that Troy has a history of 5,500 years. It was an issue that had been discussed in earlier periods and thus became definite. Of course, there will be other consequences. We are sure that the work we will continue in this area in the coming periods will certainly offer us a very different picture of Troy in terms of pottery, settlement history and the changes in the natural environment here."

Share on Facebook Share on Twitter
Previous in Duplicate More than 100 people are believed to have been killed when the Saudi-led... Next in Duplicate President Erdoğan emphasized that the planned judicial reforms aim...
DAILY SABAH RECOMMENDS