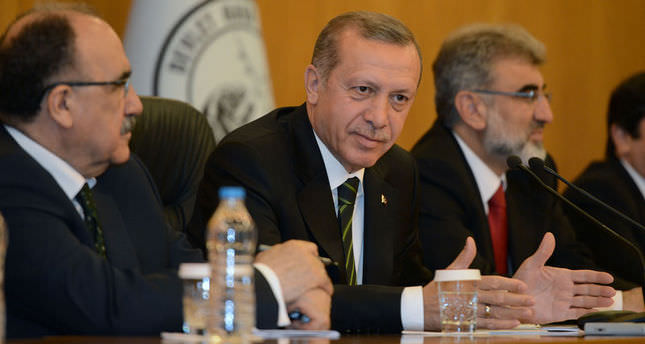 ISTANBUL — Turkish Prime Minister Recep Tayyip Erdoğan called on the country's central bank Friday to cut interest rates in order to stimulate the economy after months of political crisis. "The central bank should hold a special meeting to cut [interest rates]... just as it met previously to raise them," Erdoğan said at a press conference. The central bank, which is officially independent, aggressively raised its key interest rates in January in a bid to stem a steep drop in the country's national currency, the lira. The overnight lending rate is now 12 percent, while the borrowing and one-week repo rates are at 8 percent and 10 percent, respectively.

The January hike came amid an escalating political crisis for Erdoğan sparked by the Dec. 17 operation and anti-government protests.

Erdoğan, who turned Turkey's economy around during his 11-year rule, again pushed for lower rates that would boost credit to consumers and businesses. "Investors in Turkey will be eager once interest rates are lowered. More investments will be made," said the prime minister, adding, "We are doing quite well right now in economic terms."

Turkey's economy grew by 4 percent last year, official data showed this week, but analysts warned of a slowdown after months of turmoil and ahead of presidential elections in August and legislative polls next year.

Emerging economy currencies, including Turkey's, have taken a beating due in part to the U.S. Federal Reserve's decision to reduce stimulus measures, which curbs the attractiveness of markets that offer higher returns.

Speaking on the matter, Erdal Tanas Karagöl, economy director of the Foundation for Political, Economic and Social Research (SETA), said the markets started to react positively after elections and an expectation arose for a reduction in interest rates. "After the election results were received, many indicators in the economy got better," Karagöl explained. "Just like the central bank increased interest with regard to market indicators, the current indicators require interest to be decreased. We can say, at least, such demand emerged in the market. I suppose the prime minister expressed this expectation."

Karagöl noted that he does not expect the Monetary Policy Committee of the central bank to hold an emergency meeting but should take into account the expectation in the first meeting.

Ömer Cihad Vardan, the president of the Economic Development Foundation and president of the Independent Industrialists' and Businessmen's Association (MÜSİAD), said his organizations support the prime minister's approach to the reduction of interest rates. "The increase of interest rates affects businessmen, industrialists and consumers as well. I can say I expect a decrease in interest as the stock exchange rose and the foreign exchange showed a downward trend.

They multiplied the interest rates 2.5 or three times. As the trends in foreign exchanges are downward, those measures should be revised," said Vardan.