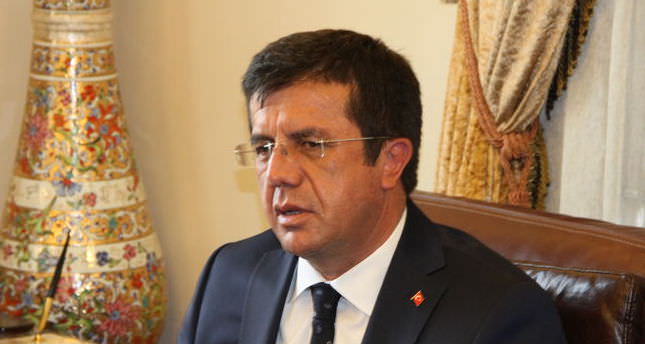 by Daily Sabah Apr 07, 2014 12:00 am
ANKARA — Turkish Minister of Economy Nihat Zeybekçi made compelling remarks about the upcoming presidential elections while on a recent visit to Talas Municipality in Denizli to congratulate Mayor Turhan Veli on his success in the March 30 local elections.

In response to questions about who the AK Party's presidential candidate would be, Zeybekçi stated: "The next president of Turkey is clearly evident." The minister claimed that people will be voting for Recep Tayyip Erdoğan, who is planning to run as candidate.

He also noted that the local elections indicated the results of the upcoming presidential election. Explaining that it is crucial for party executives and relevant bodies to officially determine the candidate who will run for president, Zeybekçi said such discussion was not as significant as it was evident that Recep Tayyip Erdoğan would run as a candidate.