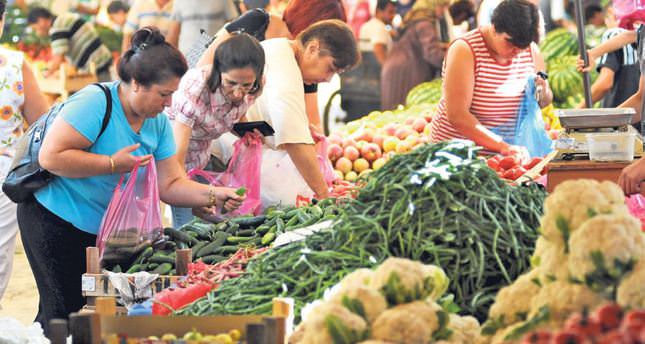 by Daily Sabah May 06, 2014 12:00 am
ANKARA — Turkey's inflation rate rose in April, according to the press release by the Turkish Statistical Institute (Turk-Stat). Consumer prices rose 1.34 percent month-on-month in April for a year-onyear increase of 9.38 percent, data showed on Monday. Domestic producer prices rose 0.09 percent in the month, for an annual rise of 12.98 percent. "The inflation hike was caused by the delayed effects of the lira depreciation and the secondary effects of [higher] food prices," said HSBC strategist Ali Çakıroglu. "We expect the rise in inflation to continue in May and inflation to gradually fall during the second half of the year."

Central Bank Governor Erdem Basçı said last week he saw room for a gradual lowering in interest rates but ruled out a deep cycle of easing, saying policy would stay tight until there was a clear improvement in the inflation outlook.

Erdoğan has overseen a decade of rising living standards in Turkey and is keen to see low rates and strong growth.

Speaking to press about the inflation rate, Turkey's Economy Minister Nihat Zeybekçi noted that he expected such a result for April because of the incidents that Turkey experienced in last few months. "Recent high inflation rates stem from the radical interest rate hike in January. We expect that inflation will go down as of June," the minister said.