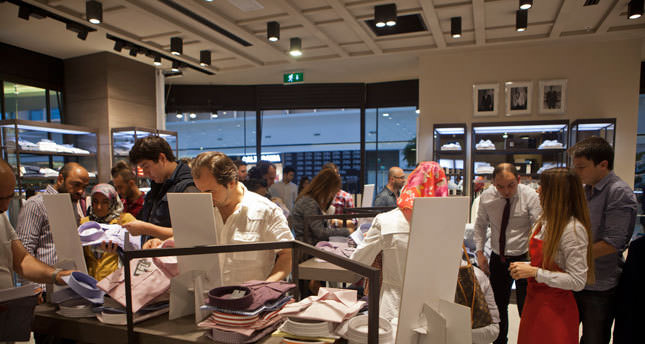 by Daily Sabah Jul 31, 2014 12:00 am
This year, a turnover of TL 10.2 billion has been achieved in Istanbul Shopping Fest (İSF). According to a statement by the İSF organizer committee, the turnover of the festival has increased by 3.6 percent compared to that of last year.

While the trade volume of the festival was TL 8.25 billion last year, the amount of shopping by foreign visitors in the festival has shown a remarkable increase as well. The number of visitors that have come to the city to attend İSF has risen by 13.8 percent and reached 1,090,284 million.

For 23 days, they have had dealings in the amount of TL 711 million with their foreign credit cards. Thus, the amount of shopping by foreign credit cards has shown an increase of 58 percent compared to 2013. In June, the sum of tax-free shopping has risen by 51 percent, while the per capita expenditure has also increased by 24.14 percent reaching an average of TL 865.

İbrahim Çağlar, the head of the Istanbul Chamber of Commerce and İSF's executive board, highlighted that one of the major targets of this year's festival is to move the dynamism from shopping malls to the streets and to make it felt in the whole city. He said that they achieved their aim through analyzing the areas in which foreign investors mostly made taxfree spending. Stating that the dynamism of shopping in the streets has very profitable results in terms of economy and continued, "Visitors mostly from the Middle Eastern countries, Russia and the Turkish Republic have invigorated shopping destinations in the streets.

For example, dealings in the districts of Şişli, Osmanbey and Nişantaşı have increased by 12 percent, while they have risen by 8 percent in Taksim and Beyoğlu. The sum of shopping at the malls has also increased by 29 percent. Therefore, we have gone through a festive season in which street shopping and mall shopping have supported each other."
Last Update: Jul 31, 2014 1:38 am
RELATED TOPICS