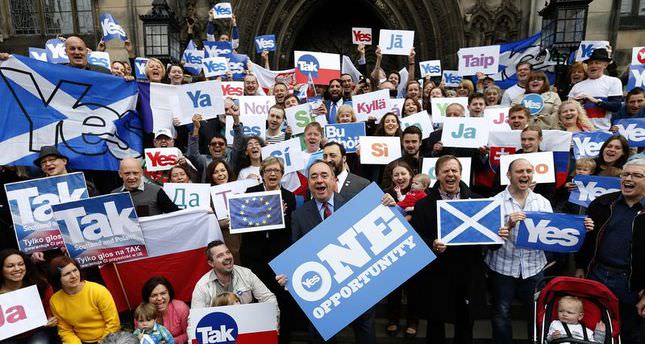 by Associated Press Sep 10, 2014 12:00 am
The loss of Scotland could hurt Britain through the amount of financial uncertainty it would generate over the next 18 months the time it would take Scotland to sever its ties with Britain.During that period, policymakers would have to agree on whether Scotland would continue to use the pound as its currency as well as how to split British public debt and North Sea oil revenue.The currency question is the murkiest.

While independence leaders say they will continue to use the pound, politicians in London have ruled out a currency union. "It would be a fairly long 18 months," said Monique Ebell, an economist at the National Institute of Economic and Social Research. Because the result of the talks would affect the value of the pound, foreign investors in Britain could delay big decisions opening a factory, for example, or hiring new staff until a time when they can better gauge the risks and costs.

Investment bank Goldman Sachs last week warned that while there was no reason an independent Scotland couldn't prosper in the long-run, "in the short-tomedium- term, the consequences of a surprise 'Yes' vote for the Scottish economy, and for the U.K. more broadly, could be severely negative." Kevin Daly, Goldman Sachs' chief U.K. economist, said that uncertainty about the pound's future value could trigger a run on the currency. The Bank of England is working on contingency plans to manage the pound in the event of a Yes vote. The potential for trouble was made clear on Monday, when the pound nosedived after a poll showed the No campaign had lost its lead. The pound shed two cents to trade at $1.6130, the lowest since November.