MÜSİAD Chairman: It would be unacceptable to equate terror with Islam 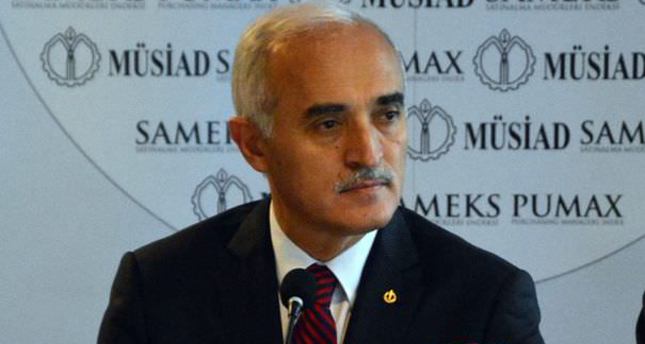 by AA Oct 12, 2014 12:00 am
Speaking at the Paris branch opening of the Independent Industrialists' and Businessmen's Association (MÜSİAD), chairman Nail Olpak said when the improvement in the eurozone is compared with rebounds of the past, a relatively slower recovery can be observed. Mentioning the numerous terrorist acts that have been happening in countries neighboring Turkey lately, Olpak said, "Terror should not be mentioned together with a religion based on peace. Whatever religion, ideology, philosophy, authority or state it is created by does not matter; terror should be fought against."

Olpak stated that in addition to the low growth rates observed within the last 12 months economic growth could not be achieved in the second quarter of this year either. "According to the data collected in the month of August, 2014, the European unemployment rate is around 11.5 percent. Furthermore, despite the precautions taken by the European Central Bank (ECB) to ward off the threat of deflation, spurred by low inflation rates in August and September, the euro-dollar parity was at its lowest level for the last two years; these are the current problems in the eurozone," said Olpak.

Touching on the dangers posed by terrorist groups such as ISIS, Olpak noted that since Turkey is a country that has suffered so much from terror in the past, for Turkey to be accused of being in cooperation with terrorist organizations is a highly improper gesture. "The memorandum issued was a correct decision. We support the operation that might be made. However, we also believe that extreme care and attention should be paid to avoid any harm to any of our soldiers, but first, diplomatic opportunities should be sought," said Olpak. Olpak remarked that those who have instigated blood-and-thunder clashes across the country, in the southern and southeastern provinces particularly, under the pretext that the Islamic State of Iraq and al Sham's (ISIS) will invade Kobani, have committed a great error.

"They should know that they threaten not only their own future, but also the future of the whole country. For many years, each and every citizen of our country, either directly or indirectly, has paid great penalties for violence and terror," Olpak said.