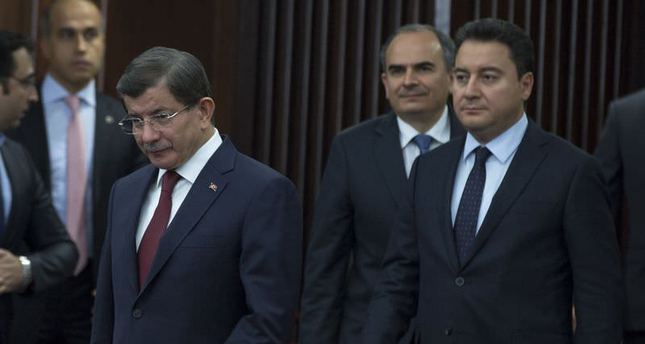 Prime Minister Davutoğlu said, “No one should worry that there is a lack of communication in the administration of the economy. All mechanisms and organs are functioning together and the performance of our country will be determined by all of our performance

Speaking to press members after a meeting held at the Turkish central bank, Prime Minister Ahmet Davutoğlu stated that the central status of the central bank in applying rational economic policies and other steps in order to maintain price stability should be supportive and should be undertaken in coordination with various other economic activities.

Davutoğlu said that he visited the bank together with Deputy Prime Minister Ali Babacan on Tuesday and added, "The Chairman of the central bank gives briefings to the Cabinet twice a year. However, our meeting today was very productive as we discussed developments in international markets and international economic policies."

Stating that the global system is on the verge of a big transformation after various tests, Davutoğlu underlined that currently the international economy is at a very dynamic stage considering the ongoing effects of the 2008 global economic crisis. "Following this economic environment closely, identifying the reflexes, corporate and psychological approaches and the problems within this mechanism and observing the effects of political problems in the near vicinity that could affect the economy are musts for a rational economic policy," said Davutoğlu.

Davutoğlu will be visiting Australia for the G20 summit next week before Turkey becomes the president of the G20 for the upcoming term. "Turkey is not a company that can only deal with internal crisis. It does not rely on the support of the IMF. It is a country that can rationally manage its own economic growth and can resist global crises. Our economy is sustainable and Turkey has become a country that has achieved exemplary statistical data in terms of financial budget discipline," noted Davutoğlu. He emphasized that the reason behind such success is the similar approaches and policies applied by the government and the Turkish central bank. "Not only is the domestic economy a success, Turkey is now standing strong and has achieved sustainable, rational growth despite the political turmoil and clashes in the region," said Davutoğlu.

Stating that each decision and step taken by Turkey in this dynamic conjuncture will have effects both domestically and globally, Davutoğlu further added that controlling demand is not the only solution for achieving price stability; the country needs to undergo a structural transformation together with demand and the real sector, emphasizing that a structural transformation plan will be announced on Wednesday.

Davutoğlu said that the transformation plan will be announced according to the sectors it addresses and that such a plan is not to avoid any further crises but to profoundly shape a country's economy. "Despite the daily discussions, what is important is to achieve productivity, efficiency through price stability, support the real sector and increase production as a result of a demand-supply balance." Highlighting that the 62nd Government Program indicates how much progress has been achieved within the last 12 years despite the global crisis, Davutoğlu underlined that now the government aims to achieve a structural economic transformation based on a humanitarian development perspective. "While the world economy was growing in the 90s, Turkey's economy was shrinking, whereas the opposite case was observed in the 2000s," said Davutoğlu, adding that with the timely intervention of the Turkish central bank in the crisis and during the term Turkish President Recep Tayyip Erdogan acted as prime minister within the last 12 years, Turkey has achieved a lot. The 62nd Government will continue to take determined steps with a nine-year perspective in terms of the economy, Davutoğlu concluded.