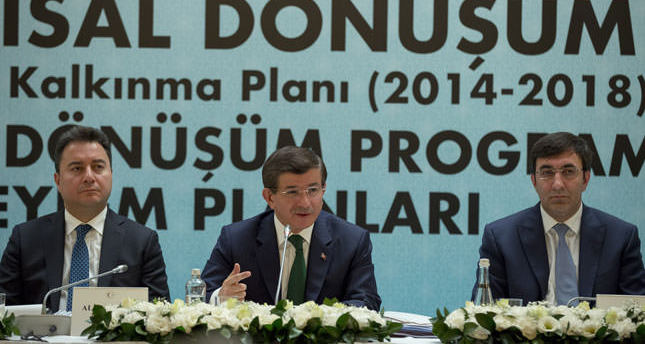 Prime Minister Davutoğlu, surrounded by his ministers responsible for every section of the economy, presented a major reform package to be implemented starting in 2015, lasting until the centenary of the Republic

Prime Minister Ahmet Davutoğlu announced an action plan yesterday to address the preferential transformation of the 10th Development Plan, called Structural Transformation for Strong and Balanced Growth. The action plans propose comprehensive transformation in 25 areas, with Davutoğlu emphasizing that they are starting a new period, with political instabilities, the global economic crisis and the quickening transformation of the world's economy and trade making it necessary for each country to review their own economic structure. He further underscored the importance of political stability and economic predictability to sustainable economic growth and added that the reforms would ensure that the high rate of economic expansion would continue in the future. The 62nd government's program has been prepared to cover the next nine years until 2023, not simply the eight-month period between now and June 2015.

Davutoğlu said that the nine sector transformation programs, and 417 action plans that have been prepared, aim to increase productivity, predictability, constant development and accountability in the country.

"The programs and plans mostly target the real sector. The second package, which we are hoping to announce next week, will contain eight sectorial transformation programs on matters that are mostly related to macro-economic balances. The last eight sectorial transformation programs will focus more on the development of human resources and social areas. The comprehensiveness of these programs indicate that we are focusing on the economy as a whole," Davutoğlu said.

Davutoğlu further said that the 12 years in which the Justice and Development Party (AK Party) has been in power would be deemed as the golden years of structural economic reforms since the Turkish economy has undergone an important transformation and is now integrated into the world economy, and all economic indicators have been positive. Recalling the negative effects of the 1994, 1999 and 2001 crises, political instabilities and unpredictable political changes on the economy, Davutoğlu emphasized that the financial sector collapsed in Turkey after the 2001 crisis, and as a result, the real sector also experienced turbulent times. Underscoring the changes in public borrowing interest levels, Davutoğlu said that this was a sign that the state can protect the balance between public finance and the state budget.

"Before the Gezi Park protests, the public borrowing interest rate was around 5 percent, and the protests caused turbulence in the economy. However, the increase in exports from $36 billion to $158 billion now proves that the Turkish real sector has competitive power in the international arena. Again, foreign investments, which were around $11.6 billion between 1992 and 2002, increased to $145 billion between 2003 and 2014, which indicates how attractive the Turkish market is to foreign investors," Davutoğlu said.

"Our goal is to increase Turkey's GDP to $1.3 trillion dollars, reduce the current account deficit from 7.9 percent to 5.2 percent and decrease the unemployment rate to 7 percent through sectorial transformation programs by the end of 2018," Davutoğlu said, adding that the plan of nine packages and 25 structural reforms represents one of the most significant structural transformation moves in the history of the Turkish Republic.

He further underscored that it is not possible to manage structural change without adopting an integrated economic model. Emphasizing the close connection between budget discipline, the strength of the financial sector and real sector's productivity, which is similar to political stability and economic stability, Davutoğlu added, "We cannot sacrifice any one of these elements. We all experienced the 2001 crisis - when banks collapse, factories start closing in the real sector. Then, budget discipline also suffered, and when this suffers, all macroeconomic balances suffer. Therefore, our main priority is to adopt an integrated, complete economy approach in both the public and throughout the other elements of the nation."

The action plan was interpreted by business world as follows: Istanbul Chamber of Commerce (İTO) head İbrahim Çağlar said, "The action plans will allow a new flourishing period for the real sector. If all of us cling to each of these 417 action plans in unity, we can write a new success story." Istanbul Textile and Apparel Exporter Associations (İHKİB) head Hikmet Tanrıverdi said, "We regard the action plans as an extremely important package and support it." The United Brands Association (BMD) Hüseyin Doğan remarked, "It is important that our country sets a new and stronger course for itself without falling into the middle income trap. Anatolian Tiger Businessmen's Association (ASKON) Chairman Mustafa Koca said, "I hope that this program will be implemented properly and we can launch studies that will allow for competitive advantage once again." Istanbul Commodity Exchange head Ali Kopuz said he found it reasonable and realistic.

We will update the GİTES (input procurement strategy) and will allow the MTA (General Directorate of Mineral Research and Exploration) to carry out mining activities abroad. We will support the domestic production of appliances used in energy generation and revise the industrial strategy to set more detailed strategic plans on a sectoral basis.

We will strengthen the innovative production structure and the competitiveness of domestic machinery manufacturers. We aim to raise the imports-exports coverage ratio over 70 percent in 2018. We will support investments in technological products in primary sectors and will aim to strengthen accredited test infrastructure.

We aim to reduce external dependence on energy and to improve the investment environment by reducing bureaucratic procedures in energy. We aim to increase the share of domestic resources to 35 percent in energy production by 2018.

We want to generalize modern irrigation systems and water-saving methods to promote water usage in agriculture. We will continue our works on land consolidation.

We will create a steering committee for the health industry and aim to meet 60 percent of our medicines by the end of 2018.

Turkey as a logistics hub

We will boost the contribution of logistics to growth by establishing a coordination committee and setting up a master plan and a main database. Apart from completing Filyos Port, we will set up new port models and increase the port capacity of Turkey.