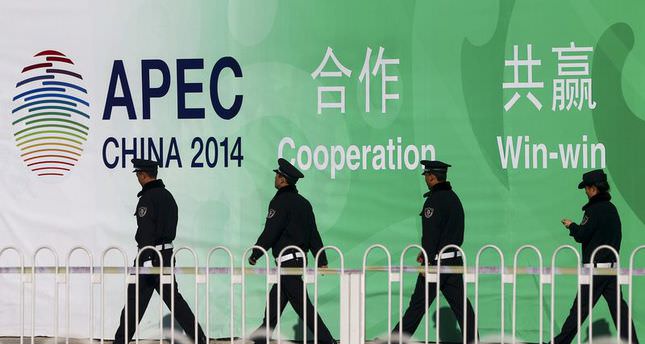 While the U.S. rules out a major Trans-Pacific trade announcement at APEC, Chinese President Xi Jinping promised a $40 billion ‘Silk Road Fund’ to help Asian nations, offering the world a vision of his ‘Asia-Pacific dream’

The Asia-Pacific Economic Cooperation (APEC) gathering brings together leaders from the U.S., China, Japan and 18 other countries, giving Beijing a prominent platform to assert its ambitions for a regional leadership role to match its status as the world's second-largest economy. The 21-member APEC includes 40 percent of the world's population, almost half its trade, and more than half its GDP, and the summit will be attended by leaders including U.S. President Barack Obama, President Vladimir Putin of Russia and Japanese Prime Minister Shinzo Abe, today and tomorrow. Before the summit, China President Xi Jinping offered the world a vision of a Chinese-driven "Asia-Pacific dream" on Sunday and promised $40 billion to help Asian nations improve trade links in a new effort to assert Beijing's ambitions as a regional leader.

According to AP, Xi made the pledge in a meeting with the leaders of Pakistan, Bangladesh and five other Asian nations ahead of the APEC summit. Beijing launched a series of initiatives this year aimed at increasing its influence in what it sees as U.S.-dominated regional and global trade, finance and security structures. The latest effort, the "Silk Road Fund," will finance infrastructure and cooperation in industry and finance to link Asian economies, Xi said in the meeting Saturday with leaders of Bangladesh, Cambodia, Laos, Mongolia, Myanmar, Pakistan and Tajikistan. "We have the responsibility to create and realize an Asia-Pacific dream for the people of the region," Xi told a gathering of business and political leaders that preceded the APEC leaders' gathering, according to AFP. It will see Beijing push forward its preferred Free Trade Area of the Asia-Pacific (FTAAP), while Washington is driving its own Trans-Pacific Partnership (TPP). The TPP is seen as the economic element of the much-touted U.S. "pivot" to Asia and so far brings together 12 APEC nations including Japan and Australia - but not China. APEC ministers agreed on the weekend to launch a "strategic study" into the FTAAP. But Michael Froman, the U.S. trade representative, told reporters Sunday: "It's not the launch of a new organization; it's not the launch of a new FTA." FTAAP, he said, was a "long-term aspiration" to be achieved through other existing negotiations such as the TPP, which was "clearly" the priority for the world's biggest economy.

A draft of the final APEC summit communique seen by AFP refers to "the eventual realization" of the FTAAP. But whether the leaders will endorse the so-called "Beijing Road Map" toward the FTAAP remained unclear. Xi said his Asia-Pacific dream was based on a "shared destiny" for the region and incorporated peace, development and mutual benefits. China was expected to invest more than $1.25 trillion abroad over the next decade while outbound Chinese tourists would exceed 500 million over the next five years, Xi said. But Beijing is embroiled in enduring territorial disputes with Tokyo over islands in the East China Sea, and with rival claimants to the South China Sea. Hopes of a formal meeting between Xi and Abe on the sidelines of the summit have risen on the back of an agreement by the two countries to try to improve relations. Meanwhile, there will be no "major announcement" of a Washington-backed Asia-Pacific free trade deal during the summit, U.S. Trade Representative Michael Froman said on Sunday. Few expected that a deal on the TPP could be reached this year, largely because of a deadlock between the pact's two biggest economies - the U.S. and Japan - over how widely Japan will open its doors to farm exports.

"There certainly will not be a final agreement, an agreement, a major announcement," Froman told reporters during an APEC briefing when asked about the TPP talks. "This is an opportunity when we have leaders altogether in one place for them to take stock of where they are and give political impetus to complete the rest of the negotiations." The U.S. insists that Japan lower its barriers to agricultural imports, but Tokyo wants to protect sensitive products including pork, beef, dairy and sugar. The TPP, which would span from Asia to the Americas and cover 40 percent of the world economy, is a key part of the U.S. effort to build stronger ties with Asia amid China's rise.