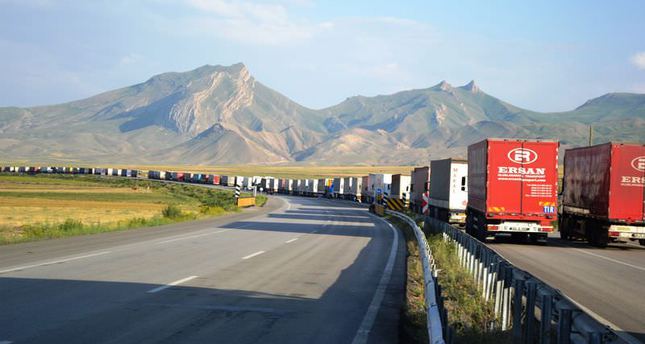 A new sanction has been imposed by Iran on Turkish trailer trucks carrying goods to Asia, increasing the tension between Ankara and Tehran. Along with delaying Turkish trucks at border gates and heavily increasing the pass fees, Iran has now taken another harsh step by increasing the fuel and diesel oil prices.

Speaking to the national news agency, the executive of National Iranian Oil and Petrol Distribution Company (NIOPDC), Asghar Tofiqi, announced that the sale price of petroleum will be increased seven-fold, and diesel oil will be increased from 15 cents to $1.10. NIOPDC, founded in 1991, works under the Iranian Petrol Ministry and is active in 37 regions in Iran. It has 82 fuel oil reservoirs, 2,300 stations and a fleet of 8,200 vehicles used for land transport.

Trying to prevent Turkey's exports to Central Asia, Iran had already passed a new decision last week. General Manager of Iran Highways, Transit and Border Passes Cevad Atrçiyan had announced that the sale of oil to Turkish trucks might be stopped within the borders of Iran. Speaking to IRNA News Agency, Atrçiyan said during the negotiations that to put an end to the conflict regarding transit passes between the two countries Turkish authorities presented a few suggestions. If the suggestions are not taken on board by Iranian authorities the sale of fuel to Turkish trucks will be ceased within Iran.

Iran has been applying a different price schedule for fuel products for Turkish trucks even following objections from Turkey. Since October 10, in order to reciprocate, Turkey has been charging the same price for Iranian trucks. On October 11, right after the new price schedule was implemented, Iran doubled the fuel prices and Turkey, in return, also increased its prices.