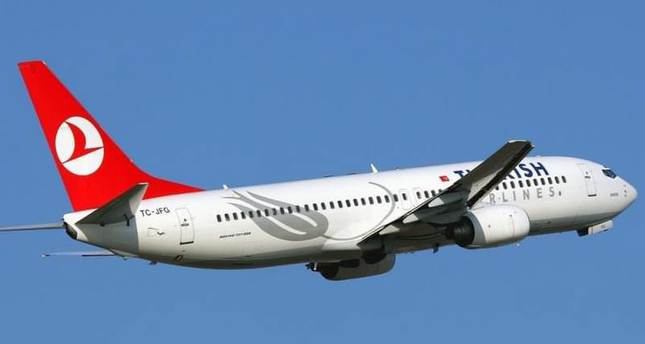 by Daily Sabah with AA Nov 10, 2014 12:00 am
Turkish Airlines (THY) has submitted its consolidated financial tables for the first nine months of 2014 to the Istanbul Stock Exchange.

Sales for Turkish Airlines increased by 33 percent when compared to the same term of the previous year reaching TL 18.4 billion ($8.13 billion). Net profit earned in the third quarter was TL 1.3 billion while net profit for the first nine months of 2014 increased by 87 percent, reaching TL 1.5 billion. The operating profit of THY for Q3 of 2014 also increased by 38 percent.

THY shuttled 41.4 million passengers in the first nine months of 2014 with passenger numbers increasing by 14 percent, available seats per kilometer by 17 percent and revenue per passenger per kilometer by 17 percent. The airline's occupancy rate remained around the same level as last year at 79.7 percent. The overall transfer of passengers also increased by 23 percent when compared to last year, accounting for 43 percent of passengers flying internationally.

Turkish Cargo, which is one of the fastest growing air courier companies in the world, increased their cargo carried by 20 percent when compared to last year within the first nine months of 2014, carrying 491,000 tons of cargo.

THY developed a platform for Miles&Smiles members to shop online on shopandmiles.com websites with their frequent flyer points. Speaking at the publicity meeting of the new platform, THY Assistant General Manager in charge of Trade Mehmet Akif Konar noted that Miles&Smiles members will earn points using a different shopping medium with cash (credit cards) and may spend those points on the same platform, purchase flights or purchase products from program partners. The platform will allow customers to use their points for shopping. "The platform will be activated in 11 countries and will offer more than 5,000 products from 300 brands and in 20 different categories," said Konar.

Again, speaking at the meeting, THY General Manager Temel Kotil also stated that in line with to the growth of the Turkish economy, the THY's business has also improved in the first nine months of the year. "This is our 80th year and the 100th year of aviation in the world. Within the next 20 years, the number of planes will multiply by two-and-a-half and about 500,000 new pilots and technicians will be required in the next 20 years. The aviation industry's share in the world's economy is growing by the minute and in order to not be left behind, we have already made major investments and already ordered 250 new planes," said Kotil.