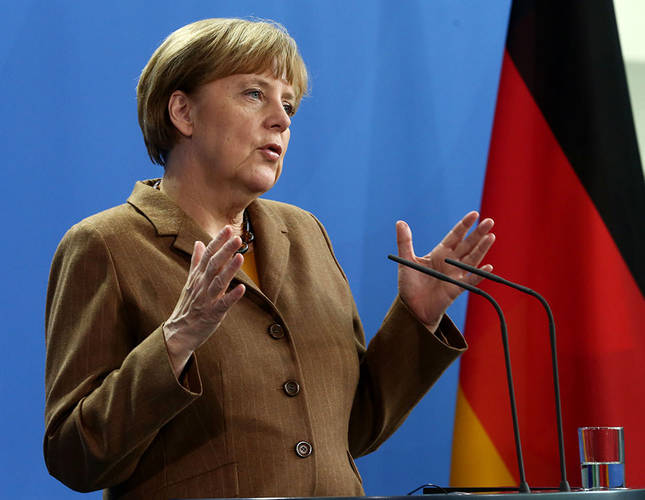 by French Press Agency - AFP
Nov 11, 2014 12:00 am
German Chancellor Angela Merkel announced on Tuesday that the European Union was not planning new sanctions against Russia over a fresh spike in violence in Ukraine.

But she added at a news conference in Berlin: "Beyond that, further economic sanctions are not planned at the moment."

After talks with Pakistan's visiting Prime Minister Nawaz Sharif that, she said that, with the onset of winter looming, the "overarching goal" was to achieve a "real truce".

Five Ukrainian soldiers were killed and nine injured in the east in the past 24 hours, Ukrainian military spokesman Vladyslav Seleznyov said on Tuesday, amid fears a shaky ceasefire signed in September could collapse.

EU foreign policy chief, Federica Mogherini, had said earlier in Berlin that EU foreign ministers would discuss "whether to increase the sanctions but most of all how to support Ukraine in these difficult times" at a meeting in Brussels due to be held on Monday.

Merkel had said last week that pro-Russian separatists could be included on Western sanctions lists against Moscow. Her comments followed the disputed elections which were held in the rebel-held east of Ukraine.

She said at the time that there were no immediate plans to reverse the EU sanctions against Russia due to the fresh fighting and the elections which she said were not in the spirit of the tattered truce agreement.

European Union sanctions, introduced progressively this year and coupled with similar measures by the United States, are meant to pressure Russia for backing the rebels and annexing Ukraine's Black Sea province of Crimea in March.

Germany had long dragged its feet on backing sanctions against Moscow with an eye to its lucrative trade ties and long-standing diplomatic and cultural relations with Russia.

But it eventually threw the weight of Europe's top economy behind the measures.