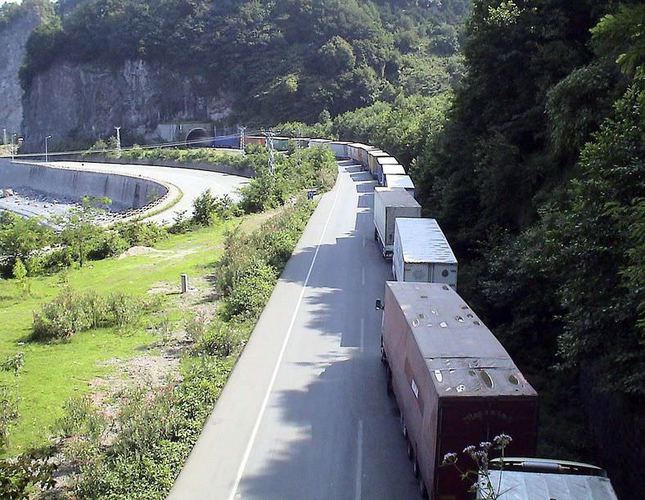 by AA
Nov 11, 2014 12:00 am
Turkey retaliated with increasing transit fees for Iranian trucks only when Iran hiked the rates for our Turkish trucks, Customs and Trade Minister Nurettin Canikli has said.

The transit fee for trucks has lately become a sticking point between Turkey and its neighbor Iran.

In an interview with Turkish broadcaster A Haber channel on Monday, Canikli said that despite the disagreement over the fee, Turkey and Iran remained friendly neighbors with strong trade ties.
Turkey and Iran inked an agreement on road transportation in 1994.
However, the minister acknowledged that the high transit fees were affecting the numbers of Turkish trucks crossing the border into Iran.

"Turkey only used its right to retaliate. We tried to negotiate with Iran, but they insisted on that fee. Our transport sector cannot progress in Iran with that high fee," he said.

He said the recent development was bad for both sides. "It hurts Turkish transport sector as well as Iran's transport sector. We see that the number of Iranian trucks and Turkish trucks crossing the border has decreased. We are trying to normalize this using the proper channel. But we are also committed to protecting the rights of our trucks," the minister said.

"We estimate that the process will damage Iran's transport sector more than Turkey. We also estimate that Iran will understand its damages after realizing its costs and it will proceed to normalize routine transport fees," he said.

According to Turkish Customs and Trade Ministry, Iran previously charged each Turkish truck that passed through its territory using the formula of distance in kilometers multiplied by 0.32.

Then Iran increased the rate to distance in kilometers times 0.32 multiplied by 0.8.

Turkey then increased its transit fee for Iranian trucks using the same formula.

However, Iran increased the transit fee formula again to distance in kilometers multiplied by 0.32 multiplied by 0.80, multiplied by 1.60 on October 10. Turkey retaliated by also changing its fee for Iranian trucks using the same formula.

Professor Selçuk Çolakoğlu, Vice President of an Ankara-based think-tank USAK, described Iran's move to increase the transit fee as a way to protect its own logistics sector.

"Iran is trying to protect its logistic sector by implementing the high transit fee since the logistics sector of its neighbor, Turkey, is highly competitive," Çolakoğlu said.

Can Acun, an analyst from the Foundation for Political Economic and Social Research, said Iran was perhaps trying to increase Turkey's costs for its exports to Central Asia.

"Turkey and Iran's relations were characterized by years of rivalry, Iran has responded to Turkey's good faith by attempting opportunism. Iran has been creating some difficulties for Turkey to transport goods to Central Asia and Iraq after the recent turmoil in the Middle East," he said.

Turkey's trucks use Iranian territory to export goods to Central Asia.
The self-proclaimed Islamic State of Iraq and al-Sham's (ISIS) invasion of Mosul has hampered Turkey's route to the region.

"Iran is also trying to get Turkish goods markets in Central Asia. Iran does not want Turkish logistic companies to be more active inside the country," Acun added.

According to Turkish officials, the trade between Turkey and Iran stood at $22 billion in 2012 before dipping to $14.5 billion in the following year due to economic sanctions imposed on Tehran.

The trade volume between the two countries stood at $3.2 billion in the first quarter, according to Turkey's official statistics office.