Turkey to suspend EU customs agreement if isolated from talks 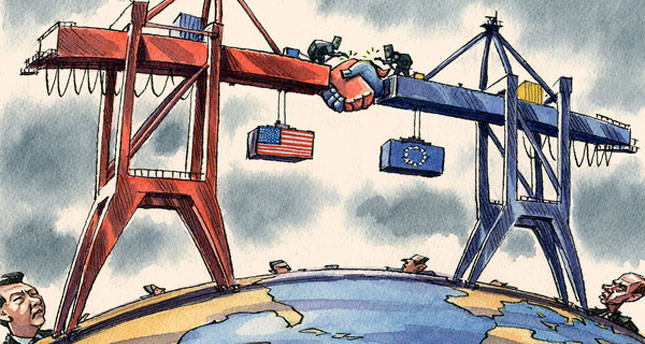 While the Trans-Atlantic Trade and Investment Partnership talks continue, the Turkish government emphasizes that the EU-Turkey Customs Union Agreement cannot be maintained if Turkey is excluded from the pact

The Trans-Atlantic Trade and Investment Partnership (TTIP) negotiations that were initiated by the U.S. and EU in July 2013, and the recent completion of Chapter 7, will have serious impacts on their close trading partners – including Turkey. Currently, the trade relationship between the U.S. and EU, which constitutes one-third of global trade, is the greatest trade partnership in the world with a business volume of 2 billion euros per day.

The agreement aims to cancel out the customs tariffs, which are already low in many sectors, between the two parties. More importantly, however, it aims to make sector regulations in the fields of security and environment mutually recognized and to remove non-tariff barriers to trade.

As the U.S. and Europe economies gradually weaken, Chinese industrial products are rapidly increasing their clout in global markets in tandem with China becoming the new center of world economics. In this context, the two industrial production giants of the world have realized that they can only maintain their dominance with cooperation, rather than competition, spurring the decision to sign TTIP.

The daily bilateral trade volume between Europe and the U.S. is around $2.7 billion, while their inventory investments have reached $3.7 billion. With trade conditions between the two countries easing further the TTIP will negatively affect all other economies of the world as trade partnerships with many smaller economies may become displaced by cheaper trade agreements forged between the U.S. and the EU.

Recently, Economy Minister Nihat Zeybekci remarked on the subject saying, "The U.S. and the EU are coming together via the Trans-Atlantic Trade and Investment Partnership. The U.S. will contrive an investment partnership with 16 Asia-Pacific countries ranging from Japan to New Zealand. More than two thirds of world trade will be in the hands of two separate blocs having an organic bond. As Turkey, we never accept to fall outside of these blocs. We no longer say 'a new world will be established and Turkey will take its place in the new world.' We say 'Turkey will be one of the establishers of the new world.' We want to be a country that determines consumption patterns and controls consumption networks in this region. In other words, we want to be a sovereign country having control over both sides of the economy."

According to information quoted by the Ministry of Economy, due to the Customs Union Agreement between the EU and Turkey, the EU is obliged to apply a Common Trade Policy by assuming a preferential trade system with third party countries. In this respect, Turkey is not directly a party to such agreements and can only negotiate and conclude similar agreements based on mutual benefit with third party countries the E.U. has signed free trade agreements with. However, since such countries can easily sell their products to Turkey because of the Customs Union Agreement signed with Turkey, the EU are not willing to sign a separate agreement with Turkey. Recently, EU Affairs Minister and Chief Negotiator, Volkan Bozkır, said that if Turkey would not be a part of the TTIP, "we will suspend our customs union agreement with the EU." We discussed the issue with the chairman of the Economic Development Foundation (IKV), Ömer Cihad Vardan. IKV is known as the private sector's specialized institution on EU relations in Turkey. Speaking to Daily Sabah, Vardan said: "As the IKV, we have been following the process from the very beginning. We established the Free Trade Agreements Knowledge and Capacity Center in order to inform the Turkish private sector about the TTIP to be signed by the two most important figures of global economy. There is no way that Turkey falls outside of this new agreement between the EU and the U.S. Necessary steps should be taken and the process should be followed closely to incorporate Turkey into the agreement. The customs union agreement helped Turkish industry gain competitive power and increase production capacity. However, it is important to review and update it. I believe that we should evaluate the reproaches of Economy Minister] Nihat Zeybekci and [EU Affairs Minister] Volkan Bozkır in this context. Turkey will be subject to the impacts of TTIP more than any other third-party country because of its customs union agreement with the EU. It is very crucial that Turkey's relationship with the EU should not be damaged."