Interest to be determined by anticipated inflation 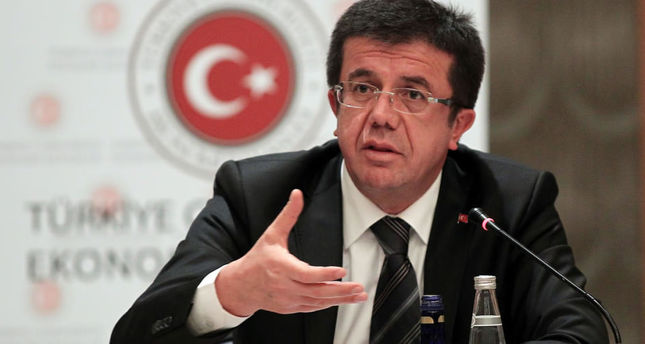 by Daily Sabah with Agencies Nov 13, 2014 12:00 am
Economy Minister Nihat Zeybekci has said that he doesn't believe that Turkey will have financing problems in the future. Responding to questions and criticisms from parliamentarians at a Parliamentary meeting of the Planning and Budget Commission, Zeykekci continued "That is why I think the interest rates that the country encounters due to its concerns about the future are high."

Zeybekci noted that he has continuously explained interest rates, as he is familiar with crises that the real economy encounters due to interest rates.

Touching upon the possibility that the U.S. Federal Reserve (Fed) will hike interest rates in mid-2015 as well as the European Central Bank President Mario Draghi's statement that they would not allow the euro to gain value and they would apply monetary expansion, Zeybekci said that Turkey would be impacted more from the ECB's steps than the Fed's measures since "We conduct more than 40 percent of our foreign trade with EU countries". "It should be natural that the economy and finance administrations have different concerns, as the minister of finance expresses his concerns about the country's finances, while I express my concerns regarding the future of investment, growth, employment and exports," Zeybekci said.

Speaking at the commission meeting, Zeybekci also pointed out that the U.S. has launched an official investigation into antidumping claims related to steel natural gas and crude oil pipes exported from Turkey with a $400 billion export potential. Since Borusan obtains the raw materials from Ereğli Demir-Çelik in which Oyak - a state institution - has 50 percent of the shares, it is claimed that Borusan is receiving support from the state. Due to such claims, the Economy Ministry has initiated an investigation into American goods that may be receiving government support. "We found two products and are now looking into cotton purchases from the U.S. and antidumping investigations in order to protect our national interests," Zeybekci said, and emphasized that the ministry is not only responsible for increasing exports but also for detecting unnecessary imports, which are currently around $30 billion.