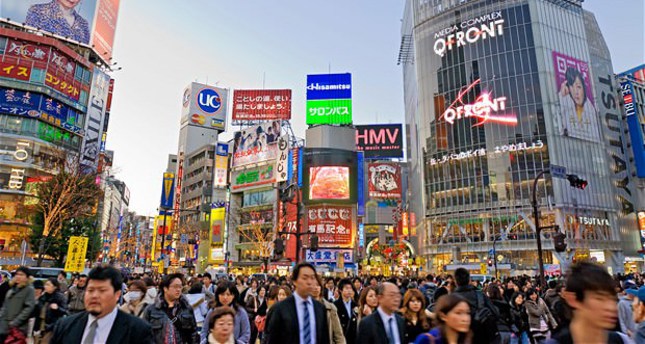 by Anadolu Agency
Nov 17, 2014 12:00 am
Japan's economy dropped into a recession after a second-straight quarter of contraction, official data showed Monday, in a huge blow to Tokyo's bid to turn around years of laggard growth.

The country's gross domestic product shrank 0.4 percent in the July-September quarter, or an annualised rate of 1.6 percent, underscoring how an April tax rise dented growth and weighing on the chances of a second levy hike next year.

The reading was worse than the 2.0-per-cent growth predicted in a poll of economists by the Nikkei business daily.

The Cabinet Office also revised growth down to a contraction of 7.3 per cent in the April-to-June quarter from the 7.1 per cent it had estimated two months ago.

The contraction for the second straight quarter was bad news for Prime Minister Shinzo Abe's government that has been struggling with a faltering economy.

The government raised the nation's sales tax in April to 8 per cent from 5 per cent - the first hike in 17 years - despite public opposition.