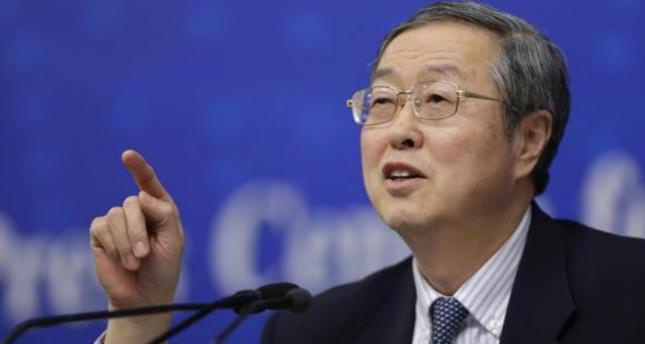 As Chinese authorities announced the rate cut and promised to inject credit into the financial system, the president of the ECB said he was ready to step up stimulus for the 18-country eurozone economy, where growth continues to disappoint

China's central bank unexpectedly slashed interest rates on Friday to shore up the world's No.2 economy, joining a growing list of major economies that are trying to bolster growth amid a global slowdown.

News that the two economic heavyweights were taking action to stave off a slowdown caused world stock markets to jump higher. The People's Bank of China said it is trying to address "financing difficulties" caused by a shortage of credit. It also said the move was not a change in monetary policy and economic conditions are within an "appropriate range." China's economic growth fell to a five-year low of 7.3 percent in the latest quarter and manufacturing and other indicators are declining. That has prompted suggestions Beijing might intervene to prop up growth. The rate charged by banks for loans to each other rose this week to its highest level since early October, reflecting reduced availability of credit, a concern for Chinese economic planners.

"If necessary, the central bank will provide timely liquidity support," or extra credit to markets, it said in a separate statement. The bank cut the rate on a one-year loan by commercial banks by 0.4 percentage points to 5.6 percent. The rate paid on a one-year savings was lowered by 0.25 point to 2.75 percent. It was the first rate cut since July 2012, and comes after the Cabinet called this week for steps to reduce financing costs for industry to make the economy more efficient.

The action also suggests the slowdown in global growth is becoming an increasing concern for policymakers. Japan confirmed this week that it has fallen back into recession and will delay a tax increase to help consumer spending. In Europe, it is also the low inflation rate a sign of economic weakness that is worrying the European Central Bank (ECB). As indicators for the eurozone and global economy disappoint, ECB President Mario Draghi was firm in his message: "We will do what we must to raise inflation and inflation expectations as fast as possible," he said in a speech in Frankfurt. Of major economies, only the U.S. is considering raising interest rates. That leaves it exposed to a potentially painful rise in the dollar currencies tend to strengthen with higher rates. The dollar hit a seven-year high against the yen, and jumped almost 1 percent against the euro on Friday. A stronger dollar makes it tougher for U.S. exporters to sell their goods internationally. In China, changes in interest rates have a limited direct effect on the government-dominated economy but are seen as a signal to banks to lend more and to state companies that they are allowed to step up borrowing. "The reduction in the benchmark lending rate will mainly benefit the larger, typically state-owned firms that borrow from banks," said Mark Williams of Capital Economics in a report. Most of China's private companies cannot get loans from the state-owned banking industry and rely on an underground credit market. "This does not necessarily signal that policymakers are going back on efforts to support smaller companies, or giving up on 'targeted easing,' but they apparently feel larger firms are now in need of support too."