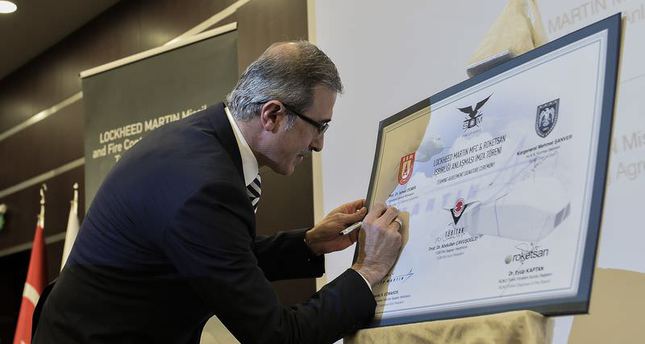 by AA
Nov 28, 2014 12:00 am
Turkish defense producers aim to boost exports to $25 billion by 2023 from the $1.5 billion exported this year, Turkey's Undersecretary for Defense Industries said on Friday.

İsmail Demir said that Turkey aims to have defense companies among the top 100 major companies in the world, and to create at least three global brands in the defense sector.

Demir made the remarks at the 15th International Fair of the Association of Independent Industrialists and Entrepreneurs in Istanbul.

"These goals may seem great," he said. "Yes, we have a lot of work to do, but the return on investment in the defense sector is very high. In addition, a good value-added product earns a high price on the market. The Turkish Armed Forces is a very important reference which attracts attention to Turkish products in the international market."

He said: "If the country's production, its technology and its industry's infrastructure are not strong or if its environment is not strong, it is unable support the defense industry."

Ankara spent over $1 billion on defense, research and development in 2013. Turkey's defense industry has gained momentum in recent years, and has seen an expansion among local producers.

More local firms have been introducing new products to the market.
According to data from the Defense Industry Exporters' Union, Turkey's exports in the defense and aviation industries combined reached $1.39 billion in 2013. Turkey's defense exports stood at $1.4 billion in 2014, while its imports amounted to $1.3 billion.

Turkey's defense spending was 29.4 billion Turkish Liras, or $13.2 billion, this year, according to the Turkish Defense Ministry.

The 2014 defense budget accounts for 3.7 percent of the overall state budget. About half of the country's defense budget goes to personnel spending such as salaries, benefits and pension payments to retired Turkish Army personnel.

Turkey is currently negotiating a $3.5 billion deal for a long-range air and anti-missile defense system, including local production, with suppliers from China and Europe. The country plans to spend around $70 billion on military equipment until 2023, when the country will celebrate the 100th anniversary of the Republic of Turkey.

Turkey, a NATO member, is required by the organization to spend at least two percent of its GDP on defense, but several members struggle to meet the threshold.