Obstacles with Russia to be solved without harming exporters 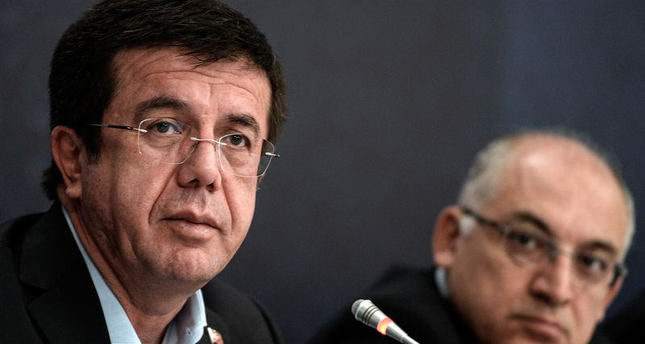 Economy Minister Nihat Zeybekci said that a different consumption pattern is on the agenda in the world since importer countries have made significant changes in their consumption and buying habits and they do not want to take inventory risks and costs.

Speaking at the Turkish Exporters' Assembly's (TİM) 2014 Exports and Economic Evaluation and Extended Board of Governors Meeting, Zeybekci evaluated Turkey's 2014 economy by calling it a remarkable success considering global economic issues and stressed services and logistics as Turkey's advantages.

According to data released by the TİM, Turkish exports rose 4 percent in 2014, reaching $157.6 billion, which is the highest in the history of the Turkish Republic. Zeybekci said the reason behind the positive developments in exports is Turkey's competitive power in service and logistics with its significant location and increasing product quality.

Turkey is also preferred by countries that do not want to bear inventory costs. Zeybekci said that due to the instability and tension in Russia, mostly short-term purchases are preferred, and due to economic uncertainties, many companies are not willing to stockpile goods. Therefore, in 2015 this may be an advantage for Turkey as Russian demand for Turkish products might increase. Furthermore, with recent steps taken by Russia and Turkey, all obstacles for trade will be eliminated through negotiations to be carried out by committees from both countries. "We will meet with the representatives of all sectors in Russia in February and we will offer solutions for all bureaucratic obstacles," Zeybekci said.

He also underlined the decline in crude oil prices as global prices decreased almost by 50 percent, which might have a major effect on the economy of the Middle East, and since 5 percent to 6 percent economic shrinkage is assumed for Russia in 2015, precautions are being taken in order to minimize the adverse affects the crisis in Russia may have on Turkish investors, entrepreneurs, contractors and exporters. Zeybekci further said that a delegation from all sectors in Russia will come to Antalya in February and after the meeting, the last step will be taken to remove the obstacles for trade between Turkey and Russia.

Given that the European economy has still not recovered, a 4 percent growth in exports in Turkey is good progress, according to Zeybekci, who further pointed out that while the U.S. economy is doing better than Europe, growth figures are declining in developing economies.

"In 2015, more focus will be on imports from Africa and the Economy Ministry aims to remove Turkey from the unsettled economies group with increase in growth and exports and a decrease in the current account deficit," Zeybekci said.

Touching on the contribution of net exports to growth, Zebekci said that while growth is not at the desired rate of 2.8 percent given the circumstances and events that happened in 2014, it can still be considered an achievement and 95 percent of the growth rate was due to increased exports.