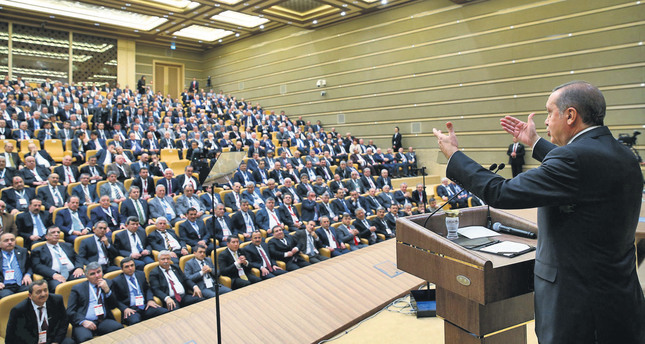 President Erdoğan keeps critisizing the central bank, which insisted on keeping interest rates high. His unorthodox stance may create shock in some quarters, businessmen are quite sure that Erdoğan's defending economic growth

President Recep Tayyip Erdoğan's statements against the central bank policies may be criticized by some experts, but they are winning praise from a class of industrialists who have thrived over the past decade and see him as a pillar of their success. Ahmet Hasyüncü has turned his humble family cotton mill in Kayseri, a city in the Anatolian heartlands, into a multi-million dollar textile exporter over the past decade, thanks largely, he says, to cheap loans and political stability.

Here and in neighbouring cities, dubbed "Anatolian Tigers" for their entrepreneurial zeal and strong growth rates, loyalty to Erdoğan runs deep. He is widely held as Turkey's greatest modern leader, delivering hospitals and schools and ending an era of unstable coalition governments.

"Without the economic policies of last ten years, without the political stability, and the credibility that allows banks to offer cheap loans to Turkey, this growth, these investments would have been unthinkable," said Hasyüncü, 63.

"If Mr Tayyip is crying out loud every day to get interest rates cut, it is for us. It is to keep the investments going," he said in his office in Kayseri's industrial zone, home to more than 900 small and medium-sized manufacturers. Erdoğan's latest attack on the central bank was on Wednesday, slamming its interest rate policy as "unsuited to the realities of the Turkish economy".

"Other than Germany, there's no country in Europe I look up to anymore. Our roads, facilities, plants, all are better ... This has all happened thanks to AK Party policies," said Aydin Murat Yakıcı, general manager of the Hasçelik steel producer. "The biggest driver of growth has been cheap money. It is not possible for us industrialists and investors to grow without loans." He has accused an "interest rate lobby" of speculators of pushing for higher rates, casting them as growing rich on interest at the expense of hard working industrialists, the real bedrock of Turkey's economic success. "Ten years ago, companies like us were snubbed by foreign investors. We couldn't find money for Libor plus 4.5 pct. When our banks managed to put together $50 million syndication loans, they were celebrating," Hasyüncü said. "I like Mr. Tayyip's determination. He stands tall. He pressed on with investments and today we have companies the Arab world and Europe admire. No-one can afford to snub us anymore."

Turkey has seen strong economic growth since the AK Party came to power in 2002, averaging 7 percent until the global financial crisis of 2008. The Turkish economy has grown by a remarkable 6 percent on average since 2010, according to the IMF's 2014 Turkey report. Growth this year is forecast by the government at four percent.

In Kayseri, the number of firms in the "Organised Industrial Zone", where investment is rewarded with state subsidies, has more than tripled in the last decade, while the city's exports have risen to around $2 billion a year from $600 million.

The central bank cut all of its main interest rates on Tuesday. The bank cut the one-week repo rate, also known as the key interest rate, by 125 basis point to 7.5 percent from 7.75 percent, which was cut by 50 base points at the January meeting. The bank further decreased the marginal funding rate by 50 base points from 11.25 percent to 10.75 percent, and cut the borrowing rate by 25 base points from 7.5 percent to 7.25 percent. The marginal funding and borrowing rates were kept on hold by the bank for six months in a row. But Erdoğan and other government officials dismissed the move once again as not sufficient, including Prime Minister Ahmet Davutoğlu and Finance Minister Nihat Zeybekci. Representatives of business communities in Turkey including the Chairman of the Istanbul Chamber of Commerce, İbrahim Çağlar, and the President of the Independent Industrialist and Businessmen's Association, one of the leading businessmen associations in Turkey, Nail Olpak, also stated that the interest rate cuts were lower than expected by Turkish businessmen.

Embattled Central Bank Governor Erdem Başçı appeared on Friday to dismiss any suggestion that he might resign, saying that public duty should be performed for the full period in which it is assigned, meaning the battle is likely to rage on. "Look around you, all of this infrastructure, all these roads, hospitals, these were possible because we were able to borrow at a much lower cost," said Mahmut Hiçyılmaz, head of Kayseri Chamber of Commerce and added "How could I keep investing with current interest rates?"