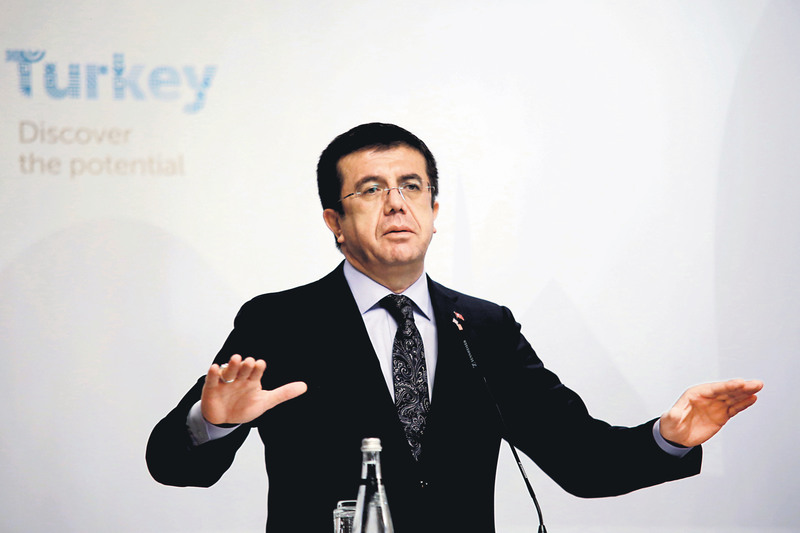 Economy Minister Nihat Zeybekci said the government was not worried about the recent depreciation of the Turkish lira against the dollar, adding that those trying to manipulate the value of the TL would eventually suffer . Turkey's attraction as an investment destination lies in contrast with the eurozone and Japan with their negative interest rates and Russia with its struggling economy, he argued.

Moreover, the only country that applies positive interest rates is the U.S. with rates around 1.5 percent, which as a result, is increasing the value of the dollar. Zeybekci also highlighted that due to these developments around the world, the worry about whether the lira would depreciate if interest rates decrease is not realistic.

The Economy Minister was invited to the TGRT News TV program along with İhlas Haber Ajansı's (İHA) Ankara representative, Batuhan Yaşar, and made various announcements about the interest policies of the Central Bank of the Republic of Turkey (CBRT), the average inflation rate in February and export and import revenues.

Zeybekci said that currently, as the European Central Bank (ECB) had stated before, euro exchange rates were increasing less than the appreciation of the dollar parity since the U.S. Federal Reserve (Fed) had announced that they will be stopping monetary expansion and will take measures for monetary tightening. The ECB, on the other hand, had announced they will start monetary expansion and decrease interest rates to negative. Denmark and Switzerland's central banks followed the ECB and the Swiss National Bank decreased interest rates to negative 0.75.

According to Zeybekci, the decision of the EU was to improve the markets, which are suffering, by decreasing the value of the euro to increase foreign demand by lowering the price of goods produced within Europe, increase production and employment and ensure growth. Zeybekci underscored that 40 percent of Turkey's foreign trade is with the EU and 72 percent of direct foreign investments are from European countries. Therefore, while Turkey is affected by the decisions of the U.S. like other emerging markets, Turkey has an advantage. "As a result, while we are adversely affected by the U.S.'s decision, our economy is improving thanks to the decisions of the EU Thus, there is no need to worry about the future of the Turkish economy," Zeybekci added.

Independence of the central bank

Zeybekci also reinforced the independent nature of the CBRT. He said the central bank is fully independent, which despite the opinion of President Recep Tayyip Erdoğan, Prime Minister Ahmet Davutoğlu and an MP that the interest rates should be decreased, the CBRT claims that according to their analysis, there is no need to lower interest rates. "Therefore, there is no need to discuss the independence of the [CBRT]. We, as the government, have only reminded them about their liabilities besides their authority, and requested them to consider growth along with price stability, interest rates, growth rates, foreign trade and also the current account deficit. All of these are good points to be discussed," Zeybekci said.

Speculations on the dollar

The economy minister said that there are a few people trying to manipulate the increase in dollar exchange rates, but they will not succeed because Turkey has no worries concerning the increase in the dollar.

Commenting on the current discussion that the "dollar rate increases when Erdoğan gives a speech," Zeybekci said that the interest rates also increase when he gives a speech. Moreover, they back up everything the president says and believe they are correct and true.

Underscoring the importance of the stability of foreign exchange rates, Zeybekci said that instability would make everyone suffer, disturb foreign trade balances and cause economic stagnation. "Therefore, if stability can be obtained when the dollar-lira rate is around 2.55, then this is good for both the exporter and the importer," Zeybekci added.

On the inflation rates announced by the Turkish Statistical Institute (TÜİK) for February, Zeybekci said the increase in inflation was temporary and was a cost-push inflation due to the increasing foreign exchange rates and bad weather conditions, which incre

ased the transportation costs and exacerbated crop wastage. Replying to the question, "Is inflation born out of interest rates or are interest rates born out of inflation?" Zeybekci said that inflation rates rise due to inflation, as the greater interest margin above the real interest rates, the greater the inflation. Zeybekci also announced that a free trade agreement (FTA) will be signed in 2015 with Japan, discussions with Russia are ongoing, an FTA has been signed with Iran and one with Singapore is almost completed.
RELATED TOPICS