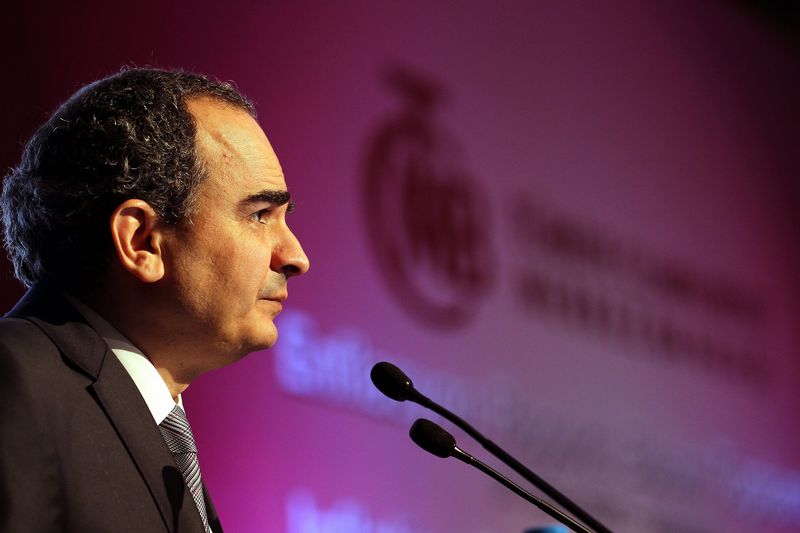 by Daily Sabah Mar 11, 2015 12:00 am
President Recep Tayyip Erdoğan met with Central Bank of the Republic of Turkey (CBRT) Governor Erdem Başçı late on Wednesday together with the deputy prime minister responsible for the economy, Ali Babacan, in an effort to realign Turkey's monetary and fiscal policies at a time when there is serious global economic instability. Başçı briefed the president on the CBRT's main reference points regarding its interest rate policy, which Erdoğan has criticized in the past, at the meeting at the Presidential Palace, where presidential economics advisers Yiğit Bulut and Cemil Ertem were also present. Başçı's 130-page presentation focused on restoring economic confidence and limiting public debt to further decrease interest rates.

The report was published on CBRT's official website following the briefing. A statement from the president's office after the meeting said: "At the Turkish president's meeting with Deputy Prime Minister Ali Babacan and Central Bank of the Republic of Turkey Governor Erdem Başçı, it was pointed out that the foundations of the economy in Turkey are solid. The meeting focused on the implementation of policies for strong and balanced growth. The president showed sensitivity to issues of interest rates and production." The statement also said that economic stability must be preserved in line with Turkey's 2023 growth targets, when the country will mark its 100th anniversary. It was also noted that the recent economic developments were being closely observed in order to take the necessary precautions. It was reported by Turkish media outlets that the governor had left the briefing early, which lasted two and a half hours. The developments in global markets and their effects on Turkey were also discussed. Further, it was noted that the meeting highlighted that the Turkish economy was based on strong foundations and policies were being applied for ensuring strong and balanced growth along with the importance that the President gives to interest and production were considered during the meeting.

The meeting had been on the agenda for two months and attracted the attention of the markets because of Erdoğan's frequent criticism of the bank about high interest rates, which is considered a barrier against production and growth. Presidency sources said Erdoğan emphasized the importance of the interest rates to provide a fair economic order and to create a more production-based and industrialized economy. Babacan and Başçı informed the president about the economic summit held to discuss exchange rate fluctuations and the current economic situation on Tuesday, which was chaired by Prime Minister Ahmet Davutoğlu, attended by eight ministers and relevant bureaucrats, and lasted for almost eight-and-a-half hours. Although the bank has maintained its cautious cuts, Erdoğan, the government and the Central Bank agreed on further interest rate cuts.

Before the meeting, Economy Minister Nihat Zeybekci said that these briefings with Erdoğan will become routine with different ministers. Following the meeting, the dollar had decreased from 2.64 to 2.58 against the Turkish lira.