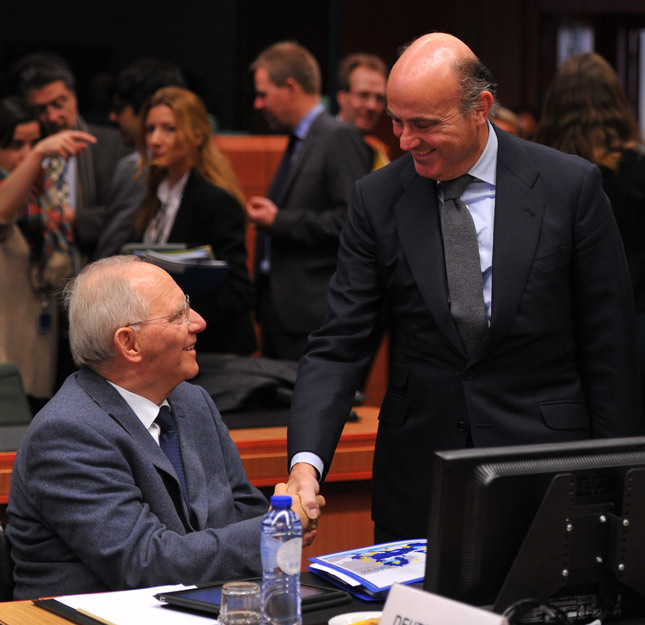 The investment fund is at the heart of a plan touted by the European Commission to inject at least 315 billion euros into Europe's economy, which is struggling to recover from a deep economic crisis.

Time is ticking, as EU officials have pledged to have the project up and running by mid-2015. Member states must now hash out a deal with the European Parliament, before the fund can start its work. "We all hope things will move ahead quickly," said German Finance Minister Wolfgang Schaeuble, after ministers gave the go-ahead. EU Economy Commissioner Pierre Moscovici said investment levels in Europe are 15-20 per cent below where they stood before the crisis. "If we are not capable of reabsorbing that, in a few years' time Europe - which is the world's number one economy with the United States - will become a second-tier actor," Moscovici warned. But some EU lawmakers have criticized the investment plan for containing little in new financial pledges. Under the proposal, a 21-billion-euro guarantee fund will be set up, aimed at encouraging investors to back projects that are currently considered too risky. This is hoped to attract funds totaling 315 billion euros.

Member states have so far resisted the calls of European Commission President Jean-Claude Juncker to contribute to the guarantee fund - which would support investments anywhere in Europe - opting instead to make money available for projects in their own countries. Germany and France, the eurozone's two largest economies, have each pledged 8 billion euros in project co-financing, while Spain has said it will make 1.5 billion euros available.

Italian Prime Minister Matteo Renzi announced Tuesday that his country will also contribute 8 billion euros to the plan. "Four member states have now put their money where their mouths are," said Jyrki Katainen, commission vice president for growth and jobs. Investment projects are to be selected according to their commercial viability and the added value they will provide to the EU.

Critics argue that many of the projects brought forward by member states are not new and may not be financially viable. Some proposals are contentious, such as nuclear energy projects opposed by Austria and Luxembourg. The ministers also agreed Tuesday to grant France an additional two years, until 2017, to meet the EU's deficit limit of 3 percent of gross domestic product. The move has proven controversial, as it is the third such reprieve granted to Paris. But ministers said it is "justified by the fiscal effort made by France since 2013, and by the current weak economic conditions and other factors," according to a statement. But the European Central Bank (ECB) criticized the amount of time granted to Paris, according to an EU source. "We fail to see convincing arguments for [granting] more than one year," ECB director Frank Moss reportedly told the ministers during their talks behind closed doors. "What France needs to do now is step up its efforts," said commission Vice President Valdis Dombrovskis, adding that these will be reviewed at the end of April. French Finance Minister Michel Sapin said parliament would adopt a series of reforms "before the summer," adding that Paris and Brussels are on "the same trajectory" in their assessment of the situation.