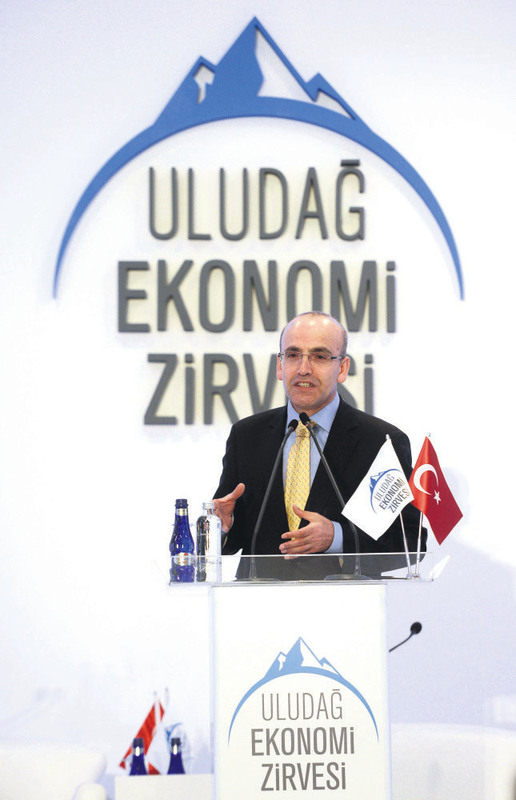 Finance Minister Mehmet Şimşek, speaking at the Uludağ Economy Summit yesterday, said Turkey needed to grow more than 5 percent in order to avoid the middle-income trap, adding that this was the aim of the government's reform program.

This year was the fourth time the summit was held, and Finance Minister Mehmet Şimşek noted in his speech at the closing ceremony that Turkey needs to increase its growth rate to over 5 percent and needs reforms that will help improve the growth rate. He further noted that the reform program prepared is designed to increase Turkey's growth rate.

Şimşek noted that currently, political stability has been established in Turkey in the last 12 years, as the country has undergone two general elections. He also pointed out that recent polls have shown that in the general elections scheduled to take place on June 7, the AKP will be receiving 47 to 50 percent of the votes, which shows that political stability will continue for another term.

Şimşek also highlighted that when the peace process is completed, it will also increase Turkey's growth potential by 1 percent and eastern and southeastern Anatolia will have major importance in Turkey's growth in the coming years.

Şimşek stated that while Turkey was dealing with presidential elections last year, they had prepared a reform program together with the Deputy Prime Minister Ali Babacan, other ministers and bureaucrats, which is aimed at Turkey's structural problems. "While Turkey's performance in the last decade has been good, we are aware that there are structural issues we need to overcome. Therefore, we have prepared a reform program that covers 25 transformation areas," said Şimşek and added that the major problem is the current account deficit. He stated that while the current account deficit is a macro problem, it has micro effects such as low productivity and low saving levels. He added that Turkey's production of technology products is low along with low energy efficiency. He said that the program is suitable to overcome such obstacles.

On high inflation rates, Şimşek said that while this is about monetary policy, it is also due to obstacles standing in front of free competition. He noted that the major reason why inflation rates are still higher than 5 percent is also due to micro problems. "After the elections in June, we have four years without any elections whether local or presidential, and therefore, we need to use this time for improvement with strong reform programs," said Şimşek.

Şimşek said that steep appreciation of the dollar is largely attributed to figures indicating a steady recovering of the U.S. economy and stalling growth in Europe and other major economies. He added that the recent sharp fluctuations in the U.S. dollar's exchange rate should not worry Turkish markets as long as correct macroeconomic policies are implemented. He further noted that the European Union was an important reference point for Turkey and that Turkey has to complete the compliance process to E.U. regulations whether the ascension to full E.U. membership takes place or not. He also underlined that the current monetary expansion policies applied in the European Union had positive effects on Turkey, as 75 percent of the capital invested in Turkey is coming from Europe. "Improvement in Europe means improvement in Turkey," added Şimşek.
Last Update: Mar 16, 2015 9:29 am
RELATED TOPICS