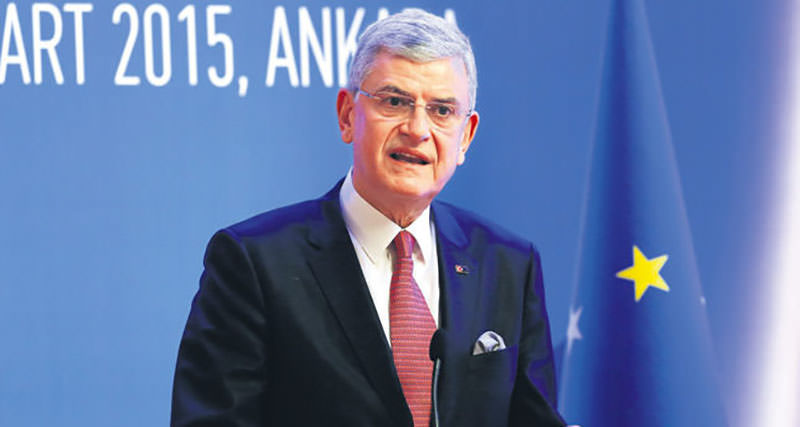 Turkey and the EU finaly agree to update the 20 year-old Customs Union Agreement with Turkey's involvement in the Transatlantic Trade and Investment Partnership, and confirm a new energy deal

Economy Minister Nihat Zeybekci announced on Friday that the EU and Turkey have agreed to accelerate the process of updating the Customs Union deal. "The agreement has been in force longer than anticipated, and there are systematic problems with it," Zeybekci said. Regarding the Transatlantic Trade and Investment Partnership (TTIP) negotiations between the EU and the U.S., Turkey had said if it is not involved in the agreement, it will cancel the Customs Union Agreement. Turkey had requested the expression "to be applied to Member States of the Customs Union" to be included in the agreement. However, answering journalists' questions during his visit to Brussels, EU Affairs Minister and Chief Negotiator Volkan Bozkır announced that both the U.S. and E.U have agreed to implement Turkey's formula for the TTIP. Zeybekci had previously stressed that the two sides decided to work on the updates in March, which is required to establish a framework for the negotiations, and that the negotiations on the joint report will be completed at the end of May. Zeybekci added that the shape of a new Customs Union Agreement, including a solution to the systematic problems and a formula to include Turkey in the TTIP, will be ready in the first half of 2016.

Additionally, a strategic energy cooperation agreement has been signed between the EU and Turkey. Bozkır highlighted that the signing of this deal confirms Turkey's strategic significance with the EU. He also underscored that strategic cooperation on energy between the EU and Turkey will not affect projects such as the Turkish Stream. "Turkey can make its own decisions. We only have to consider the feasibility of such projects if it affects the EU," Bozkır added.

The EU will establish an Energy Union, meaning negotiations for natural gas and crude oil prices will be managed from one unit. Furthermore, investments regarding energy and any matters about new pipeline projects, energy facilities and the distribution of energy types will be organized by a single unit. Bozkır noted that Turkey is now an important strategic partner of the EU in terms of energy, both with the Trans Anatolian Natural Gas Pipeline (TANAP) project and due to its geographic location. Bozkır said that the strategic energy cooperation deal was signed between Zeybekci and the vice president of the European Commission, in charge of Energy Union, Maros Sefcevic. Accordingly, energy meetings will be held between the EU and Turkey, and cooperation will extend not only to natural gas deals but also deals about nuclear energy, renewable energy and control of energy resources.

Bozkır said, "We wish to expand the Customs Union with agriculture, the service sector and public procurement. We will start the restructuring negotiations at the end of this year. Thus, a trade volume of $300 billion will be reached." Touching on the TTIP, Bozkır said Turkey will soon attend TTIP planning sessions. "Therefore, we will have created a new platform here." Emphasizing the Customs Union Agreement is important for Turkey, Bozkır said, "It is important to participate in these meetings to find a remedy for our TTIP problem."

Commenting on the joint report, Zeybekci said that it will involve reviewing problematic aspects of the Customs Union, developing the scope of the existing relations with the EU and negotiating reciprocal market access for services, public procurement and agricultural products.

The TTIP aims to negate the customs tariffs, which are already low in many sectors, between the two parties. More importantly, however, it aims to make sector regulations in the fields of security and the environment mutually recognized and removes non-tariff barriers to trade. Currently, the trade relationship between the U.S. and the EU, which constitutes one-third of global trade, is the greatest trade partnership in the world with a business volume of 2 billion euros per day.

Last year, Zeybekci stressed many times that it would be "unsustainable" if Turkey is not included in the TTIP negotiations. The economy minister had further stated Turkey will have to suspend the Customs Union Agreement if isolated from talks. "Turkey is the only non-EU country that has a Customs Union Agreement, which came into force on Dec. 31, 1995, and it is far from responding to the needs of today. It was unacceptable in terms of unfair competition after the EU signed a free trade agreement with third countries. It is not something that is acceptable for Turkey. Turkey should be included in the scope of the new TTIP agreement," Zeybekci said.

Turkish officials argue that future free trade agreements signed by the EU with other countries, such as the U.S., would effectively open Turkey's market to exports from these states because Ankara is a signatory of the Customs Union Agreement. However, at the same time, it would also effectively block Turkish exports from benefiting from tax advantages in those same states should Ankara not be a party to the free trade deals negotiated by the EU, officials highlight.

Last year, the World Bank's Turkey director, Martin Raiser, said that Turkey needs to take part in parallel negotiations with the U.S. in order to prevent adverse effects from the TTIP. "Turkey's diplomatic efforts should be concentrated on making sure that the TTIP remains an open agreement available for countries such as Turkey," Raiser said.

"Turkey has withstood the competitive pressures coming from low-cost, third-party countries without much funding from the EU," Arzuhan Dogan Yalçındağ, former chairwoman of the Turkish Industrialists' and Businessmen's Association said late last year. "If Turkey is not included in the TTIP process, we fear our interests will be harmed," she added. If Turkey is not included in the TTIP, the economic cost for Turkey could reach $20 billion and cost 95,000 jobs, the Brookings Institute said in a recent report. In 2014, Turkey's exports to the EU totaled $68.5 billion and its imports from the bloc totaled $88.7 billion.