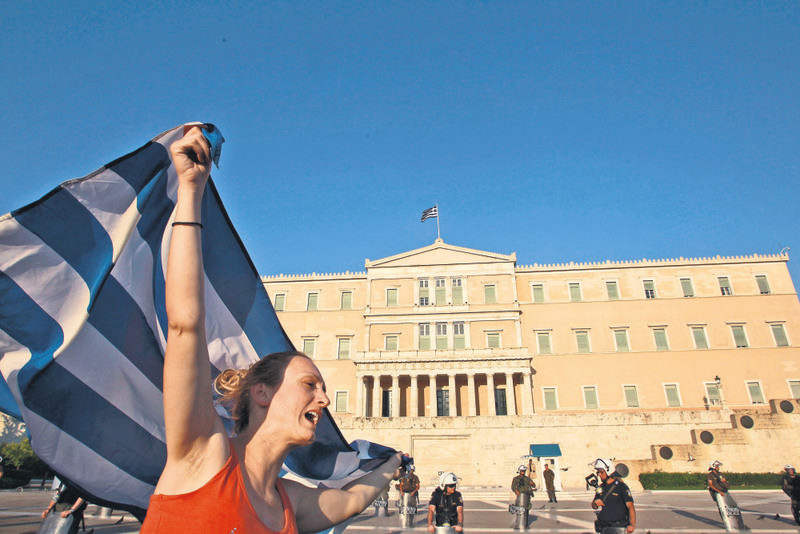 by Associated Press Apr 19, 2015 12:00 am
World finance officials said they see a number of threats on the horizon for a global economy still clawing back from the deepest recession in seven decades, and a potential Greek debt default presents the most immediate risk. After finance officials wrapped up three days of talks, the International Monetary Fund's policy committee set a goal of working toward a "more robust, balanced and job-rich global economy" while acknowledging growing risks to achieving that objective.

The Greek finance minister, Yanis Varoufakis, held a series of talks with finance officials on the sidelines of the spring meetings of the 188-nation IMF and World Bank, trying to settle his country's latest crisis. Mario Draghi, head of the European Central Bank, said it was "urgent" to resolve the dispute between Greece and its creditors. A default, he said, would send the global economy into "uncharted waters" and the extent of the possible damage would be hard to estimate. He told reporters that he did not want to even contemplate the chance of a default. Earlier in the week, IMF Managing Director Christine Lagarde rejected suggestions that her agency might postpone repayment deadlines for Greece. On Saturday, she cited constructive talks with Varoufakis and said the goal was to stabilize Greece's finances and assure an economic recovery and "make sure the whole partnership hangs together" between Greece and its creditors.

In its closing communique, the policy-setting panel for the World Bank expressed concerns about the unevenness of global growth and pledged to work with the IMF to provide economic support for poor nations that have been hit hard by falling commodity prices. Greece is in negotiations with the IMF and European authorities to receive the final 7.2 billion euro ($7.8 billion) installment of its financial bailout. Creditors are demanding that Greece produce a credible overhaul before releasing the money.

The country has relied on international loans since 2010. Without more bailout money, Greece could miss two debt payments due to the IMF in May and run out of cash to pay government salaries and pensions.

U.S. Treasury Secretary Jacob Lew said that a Greek default would "create immediate hardship" for Greece and damage the world economy. In a speech Saturday to the IMF panel, Lew urged South Korea, Germany, China and Japan to do more to increase consumer demand in their own countries instead of relying on exports to the United States and elsewhere for growth. The negotiations over Greece's debt have proved contentious but all sides have expressed optimism that the differences can be resolved. A number of countries directed criticism toward the U.S. for the failure of Congress to pass the legislation needed to put into effect IMF reforms that would boost the agency's capacity to make loans and increase the voting power of such emerging economic powers as China, Brazil and India.
Last Update: Apr 19, 2015 11:23 pm
RELATED TOPICS