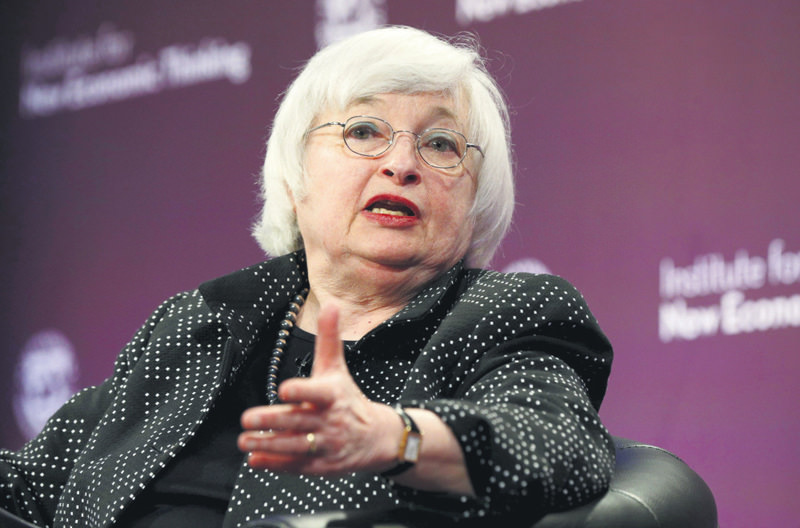 by Associated Press Jun 05, 2015 12:00 am
The International Monetary Fund urged the Federal Reserve to wait until the first half of 2016 to start raising short-term interest rates because the U.S. economy remains subpar. In its annual checkup of the U.S. economy released on Thursday, the IMF said "the underpinnings for continued growth and job creation remain in place." But America's "momentum was sapped in recent months by a series of negative shocks," including a harsh winter and a strong dollar that hurts U.S. exports.

The IMF predicted the U.S. economy will grow 2.4 percent this year, down from its April forecast of 3.1 percent. The agency said the Fed should wait for more signs of improvement specifically "greater signs of wage or price inflation." The central bank has kept its key benchmark rate at a record low near zero since December 2008.

Barring unexpected good news, the IMF said the Fed should probably hold off until next year. Many private economists, however, speculate that the Fed will start raising rates this September. In a speech last month, Fed Chair Janet Yellen said she expected to begin raising rates by the end of the year. The IMF doesn't see inflation hitting the Fed's 2 percent target until mid-2017. U.S. consumer prices fell 0.2 percent in April from a year earlier, largely because of plummeting oil prices. Excluding volatile food and energy prices, core inflation still grew just 1.8 percent over the 12-month period.

The Commerce Department reported last week that the U.S. economy shrank at an annual rate of 0.7 percent from January through March. A widening trade deficit slashed 1.9 percentage points from first-quarter growth. A big culprit is a strong dollar, which makes U.S. exports more expensive overseas and foreign imports cheaper in America.

After rising more than 20 percent against both the euro and the Japanese yen since June 30, the U.S. dollar appears to be "moderately overvalued," the IMF said. The agency said the U.S. financial system is stronger than it was before the Great Recession but warned of "potentially serious" threats to stability.

It expressed concerns about the growth of so-called shadow banks, lightly regulated financial firms that operate outside the traditional banking system. It warned that insurance companies have tried to compensate for low interest rates by making riskier investments and could be vulnerable in a financial panic. And it urged Congress not to roll back 2010's Dodd-Frank law, which strengthened financial regulation.
RELATED TOPICS