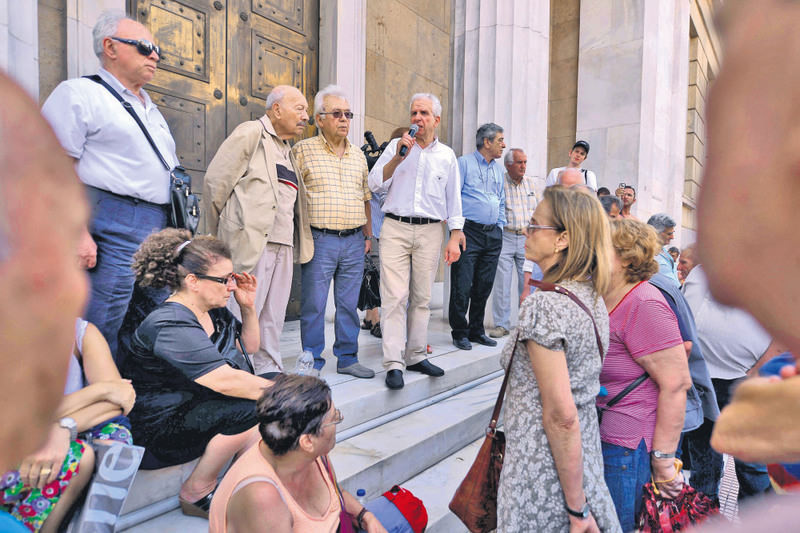 The Greek government appeared to be caving to demands from its creditors yesterday, offering concessions in a desperate attempt to get more aid hours after its bailout program expired

European officials ruled out any deal before a Greek referendum, raising increasing questions about whether Prime Minister Alexis Tsipras would go ahead with the Sunday vote, which creditors have fiercely opposed. The head of a top European intergovernmental institution told The Associated Press that any such referendum would fall short of international standards.

The details of the hastily called referendum on whether to accept budget cuts in exchange for European loans remain unclear, as are the consequences. Especially uncertain is what would happen if Greeks vote "no" and whether that would drive the country out of the eurozone and even deeper into poverty.

The Council of Europe, an independent body that monitors elections and human rights, has no enforcement capacity. But the declaration of its chief, Thorbjorn Jagland, that the referendum would not meet international standards was a major blow to the government's plan. Such standards call for at least two weeks' notice to allow for discussion, a clear question to be put to voters for consideration, and international observers invited to monitor the vote. Jagland spoke of problems with all three requirements.

In the mean time, the European Central Bank's governing council on Wednesday decided not to increase the liquidity lifeline to cash-strapped Greek banks, a Greek banking source said.

The bank is "ready to intervene as and when necessary," the source said, adding that "no other decision was taken" at the ECB meeting. It was the ECB's decision on Sunday to refuse to increase emergency funding for Greek banks that pushed Athens to close lenders and impose the capital controls.

Eurozone finance ministers, meanwhile, were meeting again to discuss Greece's position. Some European officials said the new Greek offer, made in a letter Tuesday night, wasn't good enough and that a deal remained impossible in any case before the referendum. Tsipras' letter said his government was prepared to accept creditors' proposals, subject to certain amendments.


Hopes that Tsipras was softening his position after refusing for five months to accept the proposed spending cuts boosted markets on Wednesday. Greek officials hinted that any deal with the creditors could cause the referendum to be canceled.

"Look, if a deal is found, there is a chance there could be this possibility too. Everything is developing," Health Minister Panagiotis Kouroumplis said on Antenna television. But German Finance Minister Wolfgang Schaeuble was clear that no deal was imminent, at least not before Greece's popular vote. "Before a referendum, there is indeed no basis (for an agreement)," Schaeuble said.

In Athens, crowds of anxious elderly Greeks thronged banks for hours from before dawn, struggling to be allowed to withdraw their maximum of 120 euros ($134) for the week after the government reopened some banks to help pensioners who don't have bank cards.

Greece is in a financial limbo now that its bailout program has expired, cutting it off from vital financing and pushing it one step closer to leaving the euro. The country has put limits on cash withdrawals in order to keep banks from collapsing.

Its situation was further worsened Tuesday when it failed to repay a debt to the International Monetary Fund, becoming the first developed country to do so. The last country to miss an IMF payment was Zimbabwe in 2001.

As long as it is in arrears on the payment to the IMF, one of the country's main creditors, Greece cannot get any more money from the organization.

The referendum call increased fears that the country could fall out of the euro and saw Greeks rushing to pull money out of ATMs, leading the government to shutter its banks and restrict banking transactions. Greeks are now limited to ATM withdrawals of 60 euros ($67) a day and cannot send money abroad or make international payments without special permission.

European officials and Greek opposition parties have been adamant that a "no" vote will mean Greece will leave the euro and possibly even the EU. The government rejects the argument as scaremongering, and says dismissing creditor demands will mean the country is in a better negotiating position.

With many elderly Greeks unable to access any money without bank cards, the government said about 1,000 bank branches across the country would open for three days starting Wednesday to give them access to some cash. But a seeming last-minute decision to serve customers on an alphabetical basis, announced by some banks overnight and by others in the morning, led to chaotic scenes of confusion and anger, with many pensioners waiting for hours from before dawn to be eventually told they would have to return Thursday or Friday.

Others were told their pensions had not yet been deposited and they would therefore have to return later in the week. "It's very bad," said retired pharmacy worker Popi Stavrakaki, 68. "I'm afraid it will be worse soon. I have no idea why this is happening."

Meanwhile, many ATMs had run out of 20 euro notes, meaning the maximum they would dispense per day was one 50 euro note per bank card, effectively cutting the amount of cash Greeks have access to. Capital controls will remain in place until at least next Monday.
Last Update: Jul 01, 2015 10:51 pm
RELATED TOPICS