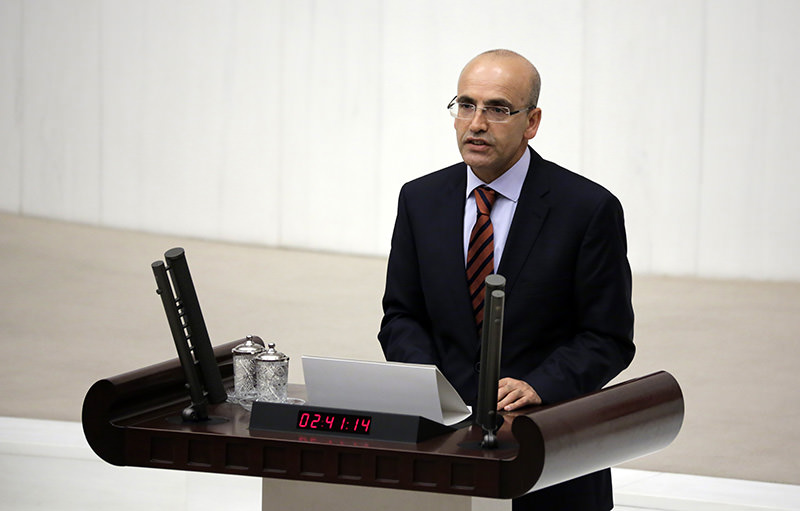 | AA Photo
by Daily Sabah with Reuters Jul 15, 2015 12:00 am
Uncertainty about the formation of Turkey's next government poses a risk to economic growth and the best scenario would be a strong coalition agreement rather than a fresh election, Finance Minister Mehmet Şimsek said on Wednesday.

The ruling AK Party lost its majority for the first time in a parliamentary election on June 7, forcing it to seek a junior coalition partner or face a re-run, and plunging Turkey into political uncertainty not seen since the 1990s.

"Everyone wants Turkey to have a strong coalition government," Şimsek told a news conference in Ankara to announce June budget developments.

Coalition talks between the AK Party and opposition parties entered a third day on Wednesday. The parties have until late August to agree on a working government or else President Tayyip Erdoğan could call for a new election.

"Having an election again is of course a negative scenario because another election means in a sense facing uncertainty through virtually the whole of 2015," Şimsek said.

The central government budget showed a surplus of 3.2 billion lira ($1.21 billion) and a primary surplus of 4.9 billion lira in June, Şimsek said, noting that a 15.8 percent rise in tax revenues in the first half had helped.

Inflation was likely to continue its fall this year if oil prices remain low and a normalization in food prices continues, Şimsek said.

Tehran on Tuesday reached a historic agreement with Western powers to curb its nuclear programme in exchange for the gradual lifting of sanctions.