Germany backs start of negotiations with Greece for 85 billion euros 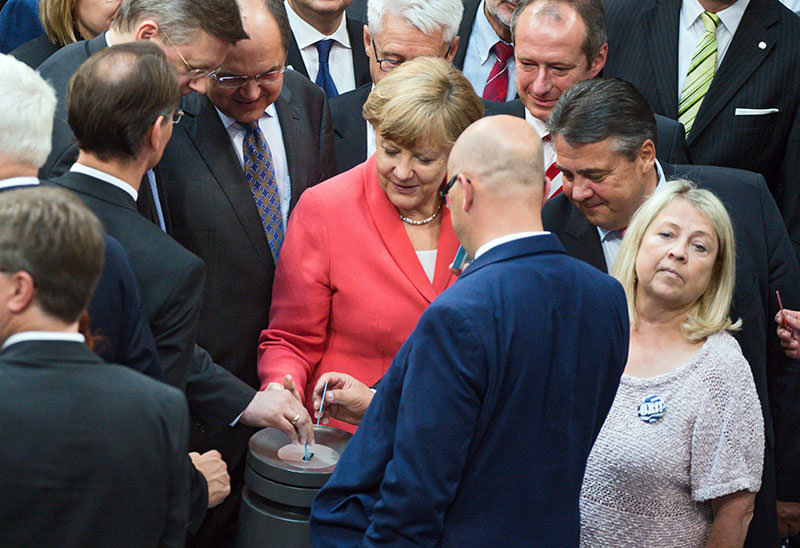 German Chancellor Angela Merkel (C-L) and German Minister for Economy Sigmar Gabriel (R) cast their vote during a special session of the German Bundestag over the proposed bailout package for Greece, in Berlin on 17 July 2015 (EPA Photo)
by Anadolu Agency Jul 17, 2015 12:00 am
The German parliament has approved Friday the start of negotiations with Greece for an 85 billion euro ($93 billion) conditional bailout program.

A total of 439 German lawmakers voted in favor of a government motion demanding a mandate to enter negotiations on a third bailout program for Greece, with 119 lawmakers voting against and 40 abstaining.

Chancellor Angela Merkel's conservative-left coalition government, which has a strong majority with 504 lawmakers at the 631-seat Bundestag, supported the third bailout for Greece.

Germany's main opposition Left Party voted against the third bailout program, while a majority of opposition Green Party lawmakers abstained.
The vote also revealed a growing discontent within the party with Merkel's handling of the crisis.

Sixty lawmakers from Merkel's Christian Democratic bloc voted against the third bailout for Greece, according to German news agency DPA, marking the biggest rebellion to date over a bailout deal.

German Chancellor Angela Merkel told lawmakers ahead of Friday's vote at the Bundestag that a conditional third bailout was important to avoid deeper economic and political crisis in Greece and to keep the country in the eurozone.

She defended the agreement reached between European leaders and Greek Prime Minister Alexis Tsipras in Brussels earlier this week after more than 17 hours of negotiations.

"If we had given up and did not give a last try to bridge our differences with Greece, it would mean leaving the country bleed to death in front of our eyes, with people not being able to get any more money, which could have resulted in chaos and violence," Merkel said.

She argued that Germany has acted in line with the EU's principle of solidarity. But she added that she also expected now that the Greek government understand its responsibilities and implement austerity measures and reforms.

Merkel stressed that the idea of a temporary exit of Greece from the eurozone, floated early this week by her finance minister, Wolfgang Schauble, during talks in Brussels, wasnot an option, as long as it was not be requested by Athens.

"The way we opted for can clearly be differentiated from the so-called 'time-out', which cannot be decided against the will of Greece," Merkel said.

"This can only be possible with the agreement of Greece and 18 other members of the eurozone. Neither Greece, nor the other 18 members signaled readiness towards that. So that option was not conceivable," she stressed.

European leaders and Greek government agreed on a conditional bailout deal on Monday, after more than 17 hours of negotiations in Brussels, with the hope of preventing the EU member state from going bankrupt.

The EU agreed to begin formal negotiations on a new bailout program for Greece with the condition that the Greek government pass four key legislations in parliament by July 15, including the streamlining of Value Added Tax, broadening the tax base, key reforms in the pension system and spending cuts.

As part of the bailout, Greek government assets will also be privatized, creating a 50 billion euro ($54.1 billion) fund, to be based in Athens and to be used for recapitalizing Greek banks and investing in the country's economy.
Last Update: Jul 18, 2015 8:52 pm
RELATED TOPICS