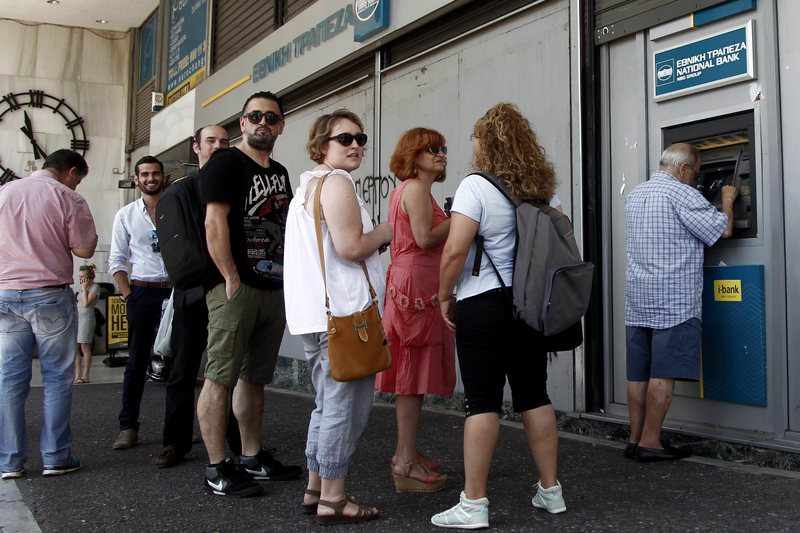 People queue to withdraw money from an ATM outside a branch of Greece's National Bank in Athens, Greece, 06 July 2015 (EPA Photo)
by Jul 18, 2015 12:00 am
Greek banks are reopening Monday after a forced 3-week closure but restrictions on cash withdrawals will remain.

In a decree Saturday, the Greek government kept the daily cash withdrawal limit at 60 euros ($65) but added a weekly limit. For example, a depositor who doesn't withdraw cash on Monday can withdraw 120 euros ($130) on Tuesday, and so on, up to 420 euros ($455) a week.

Bank customers will still not be able to cash checks, only deposit them into their accounts, and will not be able to get cash abroad with their credit or cash cards, only make purchases. There are also restrictions on opening new accounts or activating dormant ones.

The decree also pushes back by a month, to August 26, the deadline for filing income tax returns.

The degree came on the same day as Greece's coalition government swore in its new, reshuffled cabinet. Five prominent dissidents from the radical left Syriza party, the senior coalition party, were replaced. Four of them had voted against an agreement with Greece's creditors Thursday and the fifth had resigned before the vote.

Greece closed its banks beginning June 29 to prevent a bank run after the European Central Bank did not increase emergency funding as Greece's second bailout expired. After the Greek Parliament passed an agreement Thursday to seek a third bailout and related austerity measures demanded by creditors, the ECB raised its emergency funding to the cash-strapped Greek banks.

On Friday, German lawmakers voted 439-119 in favor of opening discussions on Greece's third bailout and the EU decided to release a short-term loan of 7.16 billion ($7.75 billion) to help Greece pay back a loan due Monday to the ECB.