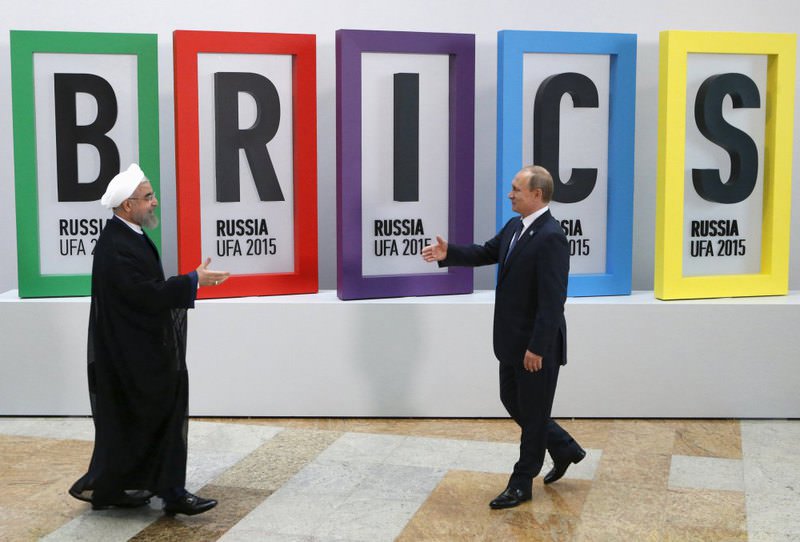 by Jul 19, 2015 12:00 am
The landmark deal on Iran's nuclear program that Russia helped steer through marathon talks is a diplomatic fillip for Moscow which will boost trade with Tehran but could also hit much-needed energy revenues, analysts said.

Iran and the P5+1 group - Russia, the United States, China, Britain, France and Germany - struck an agreement on Tuesday that would progressively lift economic sanctions against Tehran in exchange for limitations on its nuclear program.

As an Iranian ally, Moscow appears to have been central in securing the deal and experts say it could help burnish Russia's international image that has taken a beating over the crisis in Ukraine. US President Barack Obama pointedly praised his counterpart Vladimir Putin for his help, a rare hint of goodwill between the two men locked in a standoff over Russia's meddling in its ex-Soviet neighbor.

"Russia's biggest victory in the deal is one of prestige," said Sergei Seregichev, a Middle East scholar at the Russian State Humanitarian University. "Who made Iran agree with the United States? It was Russia. Without Russia, there would have been no deal."

And once Iran's sanctions are lifted, Russia - which has seen its own economy suffer due in part to Western sanctions over Ukraine -- could likely be first in line to win lucrative contracts in key sectors such as energy and transport. "Iran will have to develop the sectors that struggled under the sanctions," said Andrei Baklitsky, director of the nuclear non-proliferation program at Russia's Centre for Policy Studies. "It will need foreign companies to come and invest. Russian companies, such as Russian Railways and Lukoil, are looking to take part in this." The head of oil giant Lukoil, Vagit Alekperov, said in April the company was eager to return to Iran as soon as sanctions are lifted. A number of Western oil companies have also expressed a similar interest.

Russian Foreign Minister Sergei Lavrov in the negotiations had called for the immediate lifting of an arms embargo against Iran. Although the deal states that the current embargo will remain for another five years, Lavrov said that deliveries could still be possible with the UN Security Council's approval.

In April, Russia lifted a self-imposed ban on selling the S-300 air defense systems to Iran. A Kremlin aide said last month that Russia and Iran were preparing a contract for deliveries of the air defense systems and there has been no official comment on how the deal will affect these plans.

"There will be fierce competition for Iran's energy industry, and later in the arms industry," Seregichev said. "I think Russia will mostly strike at the energy sector because of its vast international experience in the field."

Russia's prospective gains, however, may be overshadowed by Iran's return to the global energy market, which analysts said could drive down oil prices and squeeze Russia in supplying Europe. "Iran is very eager to export oil to Europe again," said Semyon Bagdasarov, an expert on the Middle East at the Moscow-based Centre for Analytical Research. "An important player will be coming back on the market and competition will increase." The sharp drop in oil prices between June 2014 and January was one of the major factors for Russia's slump into recession and cranked up pressures on state coffers.

US bank Goldman Sachs said that the return of Iran on the oil market, after the deal is approved by the UN Security Council, the US Congress and the Iranian parliament, could drive prices down. But other analysts said that the predicted drop in oil prices would not be catastrophic given the vested interest of Iran -- a member of the OPEC oil cartel -- in ensuring the global oil market remains afloat.

"Iran has an interest in getting as much money as it can from the removal of the sanctions," Seregichev said. "An agreement over prices can always be made to avoid wrecking the market." Analysts have also said that the return of Iranian oil to an already oversupplied global market would not be immediate, and that the earliest it could happen would be next year.
Last Update: Jul 19, 2015 10:01 pm
RELATED TOPICS