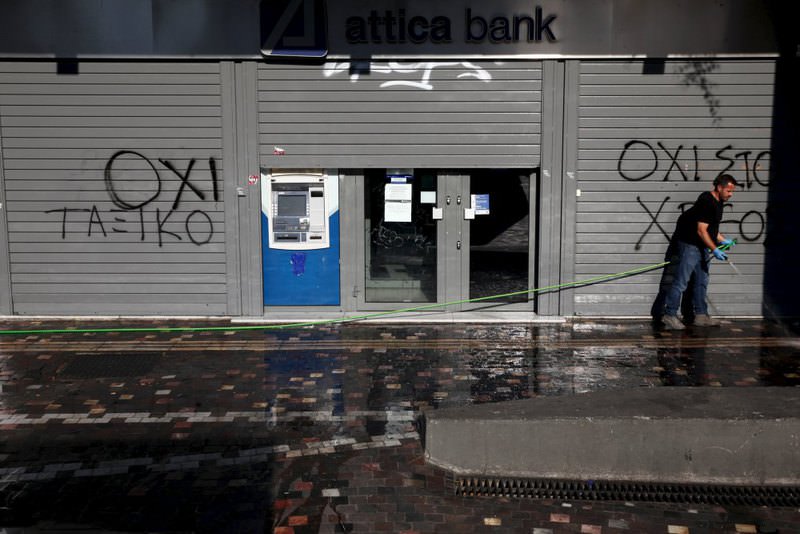 Greece is set to repay its debt to the European Central Bank today with an advance credit as part of the new bailout. While some in the Syriza- led government spoke against the reforms, Greek PM Tsipras faces a fresh challenge to get parliament's approval for a second wave of reforms this week

Greece prepared on Sunday to restart its struggling economy with a revamped government, a bank reboot and substantial increases in their value-added taxes agreed after months of fraught confrontation with its creditors. Banks are set to reopen today after a three-week shutdown, which is estimated to have cost the economy some 3 billion euros ($3.3 billion) in market shortages and export disruption.

The tax increases from 13 percent to 23 percent apply to products and services, such as processed foods and drinks and dishes served in restaurants and bars. A sharp hike in consumer taxes on many Greek islands is also set to take effect today. To sweeten the pill, the tax on medicines, books and newspapers falls from 6.5 percent to 6 percent. The tax increases are forecast to bring in 800 million euros ($867 million) by the year's end, Greek financial media said.

With Greeks now able to withdraw up to 420 euros per week, people will be spared the ordeal of queuing daily at ATMs in the summer heat, which thousands did for three weeks for a mere allowance of 60 euros per day. But capital controls remain largely in place, including a block on money transfers to foreign banks and a ban on the opening of new accounts.

Parliament approved the controls Thursday as part of a package of austerity and reform measures Greece's international creditors required before talks could begin on a new, three-year, 86-billion-euro bailout package the country needs to stave off bankruptcy. Once the new austerity program was approved, the European Central Bank on the same day agreed to allow more emergency funding to flow to Greek banks, which were nearly out of cash. As a result, they will reopen Monday after being closed for three weeks. For the first time in months, technical teams representing the creditors - the European Union, the European Central Bank and the International Monetary Fund - are expected in Athens next week to assess the state of the economy.

The austerity package caused a mutiny among lawmakers of the ruling radical Syriza party, forcing Prime Minister Alexis Tsipras to carry out a limited reshuffle on Friday. Even so, most analysts and even government officials say early elections are now inevitable and are likely to be held in September.

Tsipras, who barely has time to eat or sleep, according to his mother, faces a fresh challenge in parliament on Wednesday to approve a second wave of reforms tied to its economic rescue. Tsipras' coalition holds 162 seats in parliament, but in last Wednesday's vote, only 123 government deputies backed the bailout, just over the minimum 120 required to sustain a minority government.

Nearly a quarter of Syriza's lawmakers, 39 out of 149, failed to support the reforms bill, which passed thanks to solid support from opposition parties. The leftist government has agreed to raise taxes, overhaul its ailing pension system and commit to privatizations it had previously opposed in exchange for a bailout of up to 86 billion euros ($94 billion) over the next three years.

The draconian agreement - accepted by a party that came to power in January promising to end austerity - came after over 61 percent of Greeks on July 5 rejected further cuts in a referendum called by Tsipras himself. Greece is also scheduled today to repay 4.2 billion euros to the European Central Bank (ECB). For this purpose, the EU on Friday approved a short-term loan of 7.16 billion euros, which will also enable Athens to repay debts to the International Monetary Fund outstanding since June.
Last Update: Jul 19, 2015 8:45 pm
RELATED TOPICS