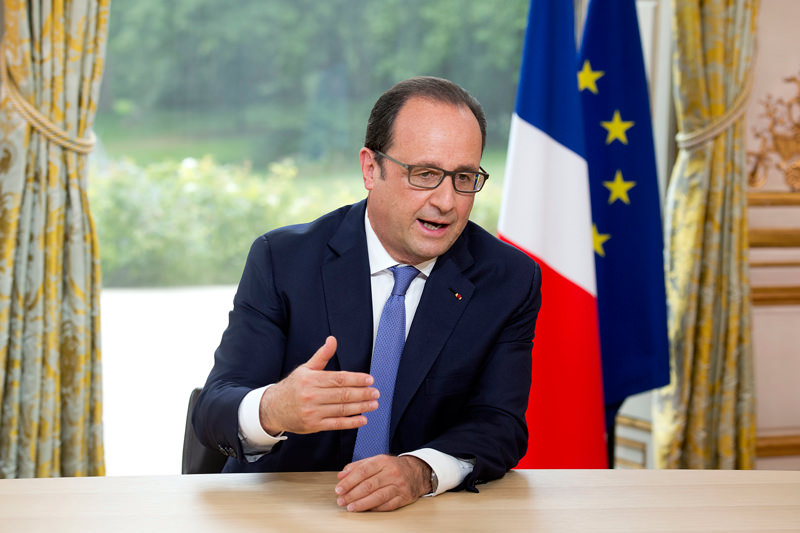 by Jul 19, 2015 12:00 am
French President Francois Hollande on Sunday called for the creation of a euro zone government and for citizens to renew their faith in the European project, which has been weakened by the Greek crisis.

Reviving an idea originally put forward by former European Commission chief Jacques Delors, Hollande proposed "a government of the euro zone (with) a specific budget as well as a parliament to ensure its democratic control".

The French president said the 19 member states of the euro zone had chosen to join the monetary union because it was in their interests and no one had "taken the responsibility of getting out of it".

"This choice calls for a strengthened organisation, an advance guard of the countries who will decide on it," he said.

The euro zone's members are currently united in the informal body the Eurogroup, which comprises each country's finance minister, presided over by Dutch Finance Minister Jeroen Dijsselbloem.

"What threatens us is not an excess of Europe but its insufficiency," Hollande wrote in an op-ed in the Journal du Dimanche weekly newspaper.

Hollande said Europe had let its institutions become weaker and admitted the EU's 28 members were "struggling to find common ground to move forward. Parliaments remain too far away from decisions. And people are turning away after having been bypassed so much."

The president said populist movements had seized on Europeans' disenchantment with European institutions and were taking issue with Europe because "they are scared of the world, because they want divisions, walls and fences to return."