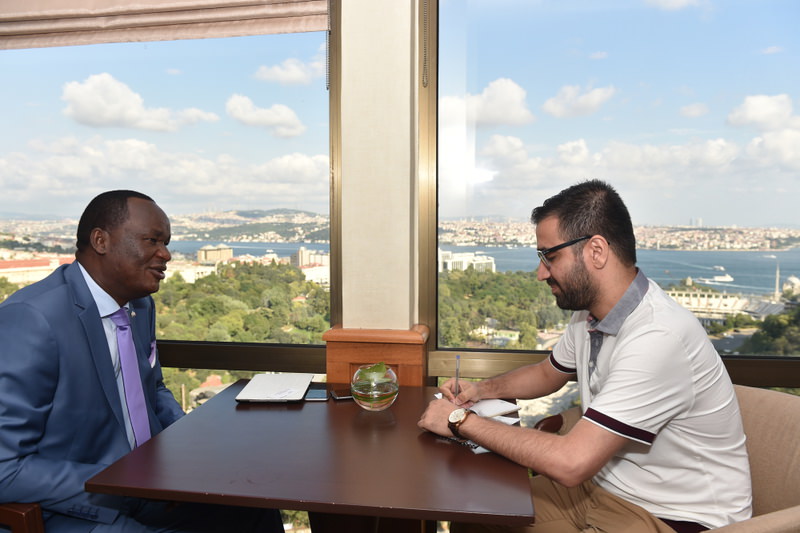 by Mehmet Çelik Aug 08, 2015 12:00 am
The bilateral political, cultural and economic relations between Kenya and Turkey have been growing stronger in the last 10 years. Kenya aims to further increase trade relations with Turkey, said the Republic of Kenya's first substantive ambassador to Ankara, Julius Kiema Kilonzo on Thursday, in an exclusive interview with Daily Sabah in Istanbul.

Kilonzo highlighted the strength of Turkish exports to Kenya, as Turkey has had increasing figures, particularly in the first two quarters of 2015, and suggested Turkey "lower taxes so that Kenya's goods can find markets here directly", rather than using trade hubs in Europe such as Amsterdam. Kenyan exports to Turkey use European hubs, which lead to double taxation, but with Turkish Airlines flying to the Kenyan cities of Nairobi and Mombasa, Kenyan goods should come to Turkey directly as an alternative hub, Kilonzo said.

Kenya's enhanced financial infrastructure and skilled manpower are its highlights as well as what makes it an attractive investment destination, Kilonzo stressed, and said Kenya, as the emerging economy of East Africa, "is looking for a partner that will help it prosper." According to data released by the Turkish Exporters Assembly (TİM), Turkey's exports to Kenya increased by 16 percent in the first seven months of the year compared to the same period of the previous year, reaching $75.9 million, up from $65 million, which is quite low considering the potential of the countries.

Kilonzo also highlighted the significant increase in bilateral relations between Turkey and African countries. "Before the Justice and Development Party's [AK Party] coming to power in Turkey, there were only six embassies [in Africa], with the focus of the AK Party [on] Africa, now there are 33 embassies, among them is [an embassy in] Kenya."

Emphasizing Turkey's humanitarian efforts in eastern Africa, he stressed that "big players have ignored Somalia," which shares a more than 800-kilometer-long border with Kenya, and said: "President [Recep Tayyip] Erdoğan and his administration has done a lot for Somalia, and this is also welcomed by Kenya. Stability in Somalia both politically and economically will also be good for Kenya."

In response to a question regarding the current situation of domestic politics in Turkey, Kilonzo said: "It is not only Turkey; the community of nations all over [the world] are looking [for] peace," and added: "Kenya and Somalia are fighting al-Shabab, and Turkey has the right to ensure that its citizens are safe. That is the primary responsibility of any democratically elected government: To secure its people and property of its people. Turkey is on the right track."

The Republic of Kenya inaugurated its embassy in the Turkish capital Ankara on April 4, 2014. Kilonzo arrived in Turkey to serve as the first official Kenyan ambassador to Ankara on Jan. 19 and presented his accreditation to Erdoğan on June 19. Kenyan President Uhuru Kenyatta and then-foreign minister and current Prime Minister Ahmet Davutoğlu attended the inauguration ceremony. Kenyatta's visit to Turkey marked the first-ever presidential visit from Kenya to Turkey. Meanwhile, Turkey's then President Abdullah Gül visited Kenya in 2009.
Last Update: Aug 08, 2015 12:27 pm
RELATED TOPICS