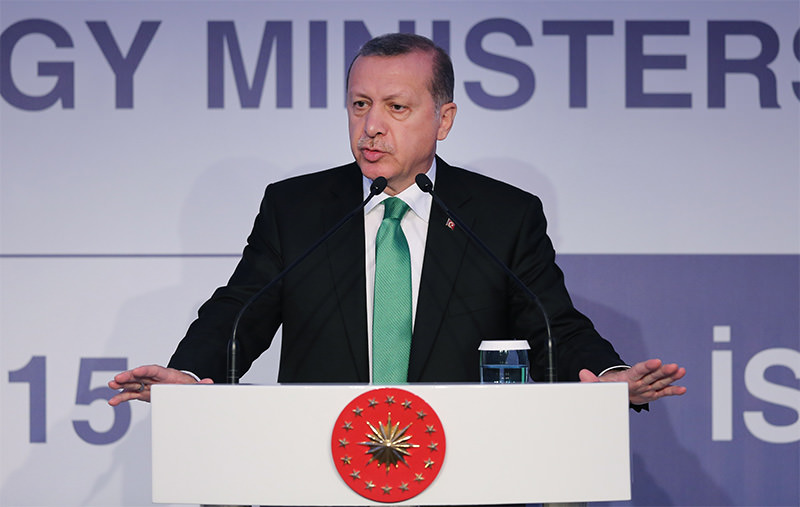 Underlining stability and trust as the essence of sustainable growth both on global and national scales, President Erdoğan stressed the importance of coordinating of the financial and macroeconomic policies in the energy sector

President Recep Tayyip Erdoğan attended the G20 energy ministers' meeting in Istanbul on Friday where he called for a multi-dimensional approach to energy issues, particularly of investment and funding for energy concerns. He also highlighted the importance of stability and trust for global economic growth. The president stressed that establishing and maintaining strong economic growth, both on the local and global levels, can be attained by stability and trust. "The G20 has a big share in the strong coordination of financial and macroeconomic issues among the world's leading economies. The main goal should be to take measures to prevent an environment that causes crises to emerge and establish a corporate structure of cooperation," Erdoğan said. Calling for a multi-dimensional approach to global energy issues, Erdoğan highlighted the importance of investment and funding of new sustainable energy projects.

"In particular, investing and funding aspects of energy are very important. I think G20 countries have the proper ground to develop cooperation in this field. As the G20 countries, our core issue is [to achieve] strong, sustainable, balanced and inclusive global growth," Erdoğan said, adding that Turkey organized its priorities under the titles of implementation, investments and inclusiveness when it took over the G20 rotating presidency.

Erdoğan said an additional 2.1 percent growth is expected by 2018 if G20 countries practice growth strategies that were accepted last year, meaning an additional fund inflow of $2 trillion to the global economy and an additional $2.1 billion in resources for energy investments.

Turkey took over the presidency of the G20 from Australia, and China will preside over the summit in 2016. It is a key group tackling world economic challenges, such as unemployment and income inequality, and is responsible for continuing to direct the global economy, as it emerges from the recent financial crisis.

On Friday, Erdoğan called for more public-private partnerships for much-needed infrastructure investments. Erdoğan said the public sector should overcome its jealousy toward the private sector, and called for the establishment of efficient cooperation between the two. During his speech, the president asked the private sector to cooperate "hand-in-hand" with the public sector and jointly invest in new projects. "The private and public sectors should collaborate to meet the necessary financing for global infrastructure investments," Erdoğan said. He added that the world needs to invest around $70 to $90 trillion for infrastructure until 2030 to achieve sustainable growth, while developing countries should invest $1.5 trillion annually. "A new effort and a new mentality for cooperation is needed to achieve this," Erdoğan stressed.

The president said improving the private sector's confidence in such investment is important, and he called for financial institutions to make funding more accessible for investors. The president also called for accelerating energy infrastructure investments, as delaying them would affect energy security. According to the International Energy Agency (IEA), $48 trillion in global energy investments are needed through 2035, Erdoğan said. "We witnessed that a fruitful partnership between the public and private sectors produced positive results in Turkey," Erdoğan said, adding that public-private partnership practices helped the country actualize many infrastructural investments that it could not have undertaken using the national budget alone. "If we can bring together the dynamism of the private sector with the investment needs of the public sector through efficient cooperation, we can invigorate infrastructural investments on a global scale," Erdoğan said. To achieve this, he said the private sector should overcome its jealousy and its understanding that the private sector should not earn more.

Underlining that the main point in infrastructural investments concerns gaining the confidence of the private sector, rather than finding financing, Erdoğan said the finance sector in the private sector should not behave jealously toward one another either. He added that the private sector's constant pressure on investors in the real sector hampers investments, calling on the sector to adopt a "local and national" understanding.

Erdoğan said: "With this understanding, we want G20 countries to develop concrete and comprehensive investment strategies. As G20 leaders, we will address our infrastructural investment strategies as a whole during the G20 Summit in Antalya. Our decisions on the issue will help economic growth increase momentum."
Last Update: Oct 02, 2015 8:47 pm
RELATED TOPICS