by Metin Can - Şeyma Eraz 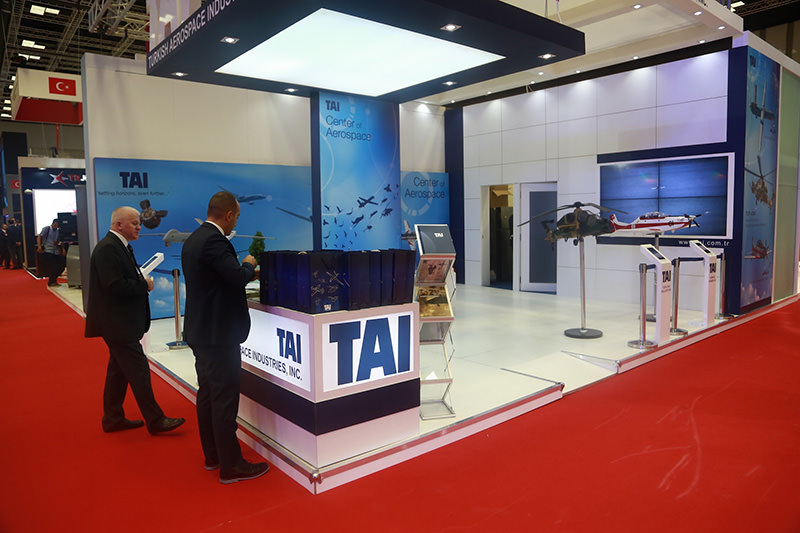 by Metin Can - Şeyma Eraz
Oct 06, 2015 12:00 am
The High Tech Port by the Independent Industrialists and Businessmen Association (MÜSİAD) Qatar Fair, which is bringing together leading institutions from the Turkish and Qatari defense industries, and the 19th International Business Forum has started at the Qatar National Fair and Exhibition Center.

The fair is expected to create a trade volume of around $5 billion and has been marked by the success of Turkish engineering. With Turkuvaz Media Group as press sponsor, various recent local projects including the Atak helicopter, Altay tank, National Ship (MİLGEM), Göktürk-2 satellite, Kirpi, national infantry rifle and drones have been introduced in the fair.

Speaking at the opening ceremony, Defense Minister Vecdi Gönül underlined the efforts of both Qatar and Turkey in ensuring peace, stability and security in the region. Also saying that this is the first time the fair is being held outside Turkey, Gönül deemed it a sign of the strong ties between the two countries. The fair supports investments to advanced technological products and brings consumers and investors together. With 57 firms with strategic abilities attending the fair, Gönül said it is a great opportunity to work together and that the activities of the Independent Industrialists and Businessmen's Association (MÜSİAD) in Qatar is one of the best examples of exhibitions in high technology.

Deeming Qatar one of the most crucial players in the Middle East, Gönül praised the country's efforts to ensure peace and stability in the region along with Turkey. "These two countries share historical and cultural similarities and have adopted similar principles regarding global peace. Qatar and Turkey are two countries that strive to ensure security and safety in the region," Gönül added.

Qatari Minister of Defense Hamad bin Ali al-Attiyah pointed out that the global economy is in recession, which means more international cooperation is required and that he believes the fair will contribute to cooperation between both countries. "Along with deepening relations between the two countries, I believe it will help improve the commercial partnership between the two countries," Attiyah said, and added that Qatar is striving to use developing technologies in both civilian and military areas.

The president of MÜSİAD, Nail Olpak, said 57 members of the Islamic Cooperation Organization (ICO) account for 2.4 percent of global research and development expenses, 1.6 percent of total patents and 6 percent of scientific publications, which are not small amounts. "We had an ideal 25 years ago: High moral values, high technology. Our report pointed out the middle income trap Turkey is back in in 2012, and in this regard the 15th International Business Forum was organized with the theme: "Technologic Cooperation between Members of the Islamic Cooperation Organization." Again at the first High Tech Port by MÜSİAD organized between Nov. 26 and Nov. 30, 2014, we realized Turkey was at the point where it could share its high-end technology products and systems with neighboring and ally countries," Olpak said. He also added that as a result of discussions with President Recep Tayyip Erdoğan and the Prime Minister Ahmet Davutoğlu, Qatar was chosen as the location for the second High Tech Port by MÜSİAD.

Olpak also said the High Tech Port is not only an exhibition, but also a civilizations project and he announced that the next High Tech Port fair will be held in Saudi Arabia and the following one is to take place in Kuwait.

BMC CEO Ethem Sancak, whose company will be introducing its state-of-the art technologies for the first time and promoting seven of its defense vehicles, said that they are now working on a new version of the Kirpi. "The target of Kirpi, a completely local product with a special design against mines, aims to ensure personnel security. There are 650 of them used by the Turkish Armed Forces and now the Armed Forces said the vehicle is too passive in the event of a blow, therefore, we have placed 12 mm anti-aircraft guns on top that are controlled from the inside," Sancak said, adding that they designed a new model for seven passengers, which would probably be used more for inland security. Kirpis have experienced 60 explosions as of today with no casualties and were sent to Tunisia just two weeks before an al-Qaida bombing. Sancak said the Tunisian chief of staff sent a thank you note afterward.

Sancak also announced that the Turkish Armed Forces will be opening a contract for 400 vehicles and that they mostly require attack vehicles. "Therefore, we designed the Vuran and now we're back to our previous capacity with 1,400 workers working in three shifts," he said. He also said that they invited a very qualified research and development chief who worked 20 years for General Electric to Turkey to assist them in developing a local perspective for the defense industry. Referring to the Qatari military as Turkey's strategic partner, Sancak said that Qatar wants to contribute to the progress of national and local industries in the region.

"We need to make an investment of $1 billion and we have realized more than 50 percent of this and will complete the remaining within the next years," Sancak said, and added that Turkey needs to stop being the agency or intermediary, as in this manner it can only get a commission and become the manufacturer. He also announced that they will enter into the Altay tank contract tender with the prototype manufactured by Koç Group together with other partners.

Sixty-seven Turkish firms including BMC, Aselsan, Havelsan, TAI, Roketsan and THY Teknik and Kale Group will attend the event, which brings together big players in the Turkish and Qatari defense industries. The fair is the first event organized jointly by the two countries and will host the introduction of Turkey's first regional jet plane, TRJet, in the Middle East for the first time.
Last Update: Oct 06, 2015 5:40 pm